Chiefs special teams anything but special in Titans debacle 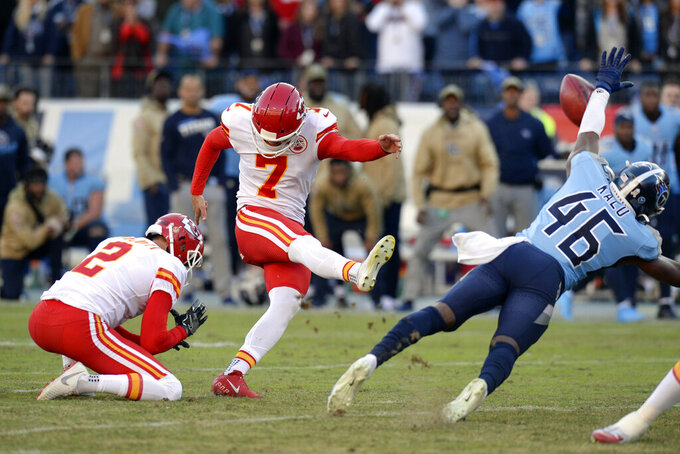 The reason is simple: His teams have nearly always been exceptional.

On Sunday, they were downright dreadful.

During a calamitous 35-32 loss to the Tennessee Titans, the Chiefs botched a field-goal attempt that could have made overtime a worst-case scenario. They had another field-goal try blocked when they managed to drive within range in the final seconds for a tying attempt.

Throw in a series of punts fielded inside the 5-yard line, and fumbles and penalties that cost the Chiefs field position, and there's been nothing special about their special teams this season.

"I'll take responsibility for the loss. We were in a position to close it and we didn't get that done," Reid said. "Then we were too sloppy. You come down and play like we did, again, that's the head coach's responsibility. You can't do it like that."

The first botched field goal in the fourth quarter came from miscommunication between long snapper James Winchester and holder Dustin Colquitt. Winchester thought he saw Colquitt looking forward, began to hike the ball and then noticed the holder had looked back again.

"I tried to hold it," he said, "but yeah, it went fast. It was just miscommunication."

The problems didn't end there. Colquitt threw the ball away and was penalized for intentional grounding, giving Tennessee even better field position. The Titans drove downfield for the go-ahead score, forcing the Chiefs to frantically attempt to get back into field-goal range.

They did. Then they had the kick blocked.

"I want to see the replay on that to see how close that was," Reid said. "I thought he was offside when it happened, but it might not have been. But that's what it looked like from the side."

Regardless, the way the special teams performed Sunday looked ugly from all sides.

The poor special teams ruined a triumphant return by Patrick Mahomes, who had missed two games with a dislocated kneecap. He threw for 446 yards and three touchdowns, most of it going to Tyreek Hill, and made a dazzling jump-pass to Mecole Hardman that he turned into a 63-yard score.

After a better effort against the Vikings' Dalvin Cook last week, the Chiefs' defensive line was gutted by the Titans run game once again. Derrick Henry ran for 188 yards and two scores, and his 68-yard touchdown run came while Tennessee was dominating the Chiefs up front.

"It just goes back to the details and everybody being sound," Chiefs safety Daniel Sorensen said.

Tight end Travis Kelce had 75 yards receiving and a score, and he had another touchdown reception called back by a penalty. It was a solid performance by one of the league's best at his position, and it came on the heels of a couple of shaky efforts marked by penalties and drops.

LeSean McCoy took over the No. 1 job at running back earlier this season. But persistent problems with protection, and some fumble issues, caused him to fall out of favor. He wasn't even active against Tennessee as the Chiefs rolled with Damien Williams, Darrel Williams and Darwin Thompson.

"I just thought it was the right thing to do right now," Reid said. "LeSean's not getting any younger so it's important that I manage him the right way as we go."

Defensive end Emmanuel Ogbah tore his right pec and could be out for the season. Offensive lineman Martinas Rankin also could miss the rest of the year after hurting his right knee.

7,894 — That's the number of consecutive snaps right tackle Mitchell Schwartz played over the course of 122 games before a knee injury knocked him out Sunday. The only NFL players with longer games-played streaks are Chargers quarterback Philip Rivers (218), Redskins linebacker Ryan Kerrigan (137) and Ravens cornerback Brandon Carr (184).

"It was 7½ years running," Schwartz said. "Now I'm just normal like everybody else. It is what it is. You do inventory and make sure nothing's going in the wrong direction or drastically wrong, and I've been able to avoid that."

The Chiefs get an extra day to prepare for Monday night's game against the Chargers in Mexico City. Then comes a long-awaited bye and an opportunity to get healthy.