Chiefs, Steelers top AFC, but plenty of others could contend 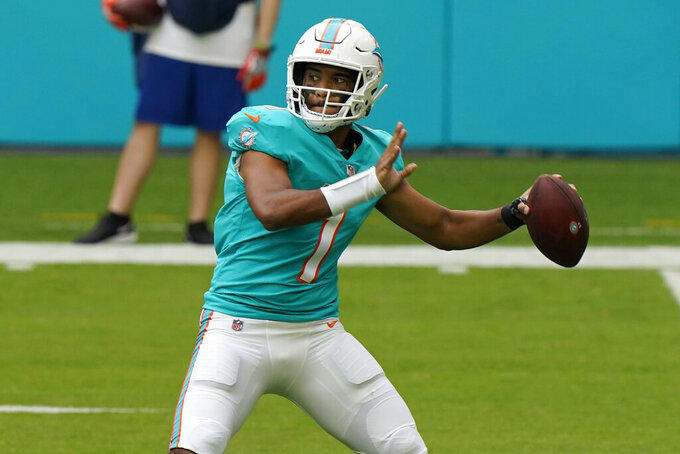 Miami Dolphins quarterback Tua Tagovailoa (1) looks to pass the football during the first half of an NFL football game against the Cincinnati Bengals, Sunday, Dec. 6, 2020, in Miami Gardens, Fla. (AP Photo/Wilfredo Lee)

Patrick Mahomes and the Kansas City Chiefs are already in. No surprise for the defending Super Bowl champions.

Ben Roethlisberger and the Pittsburgh Steelers are undefeated no more, but they're also on the verge of clinching an AFC playoff spot.

After that, well, there are plenty of other contenders who might have something to say about the conference being just a top-heavy twosome.

Buffalo and Cleveland are 9-3, with Tennessee, Miami and Indianapolis all 8-4. They'd all be in the playoffs right now with this season's expanded, seven-team format.

Baltimore and Las Vegas are still in the mix at 7-5. And it's never smart to count out a Bill Belichick-coached team, especially with New England surging with four wins in its last five games to get to .500 at 6-6.

A division-by-division look at the AFC playoff race going into the final quarter of the season:

Josh Allen and the Bills could make a massive statement when they take on the Steelers at home Sunday night. The third-year quarterback has played his way into the MVP conversation and another impressive performance — and a win — would justify that buzz. It would also put Buffalo well in line for its first division title since 1995.

But the Dolphins are still swimming right there with the Bills. Miami and rookie quarterback Tua Tagovailoa are just a game behind Buffalo in the race for the division and host the Chiefs on Sunday. Still, there's a chance the regular-season finale at Buffalo on Jan. 3 could decide who finishes on top.

The Patriots have been that team for 11 consecutive years — with Tom Brady at quarterback, of course — but that streak appears in serious jeopardy. Belichick's bunch has this going, though: After a road game Thursday night against the Rams, New England's final three opponents are all in the division — at Miami, home vs. Buffalo and home against the currently 0-12 New York Jets.

The Steelers were cruising along, giving those undefeated ’72 Dolphins something to think about when — whoa! — the Washington Football Team dashed any dreams of perfection in Pittsburgh with a stunning 23-17 upset Monday night.

Now, winning the division is far from a certainty, especially with Baker Mayfield and the Browns on a four-game winning streak and looking like the scary squad many have been expecting. Pittsburgh still has a two-game lead and could clinch with a win and a Browns loss to Baltimore, but the division could come down to these two playing in what will likely be chilly Cleveland in the regular-season finale.

Oh, and don’t forget about Baltimore, which might be out of the division race but got Lamar Jackson back from a one-game COVID-19 absence and snapped a three-game skid with a 34-17 win over Dallas on Tuesday night. The Ravens host the Browns next, then finish with three straight opponents currently with losing records: home vs. Jacksonville (1-11) and the New York Giants (5-7), and at Cincinnati (2-9-1).

Tennessee and Indianapolis split their two regular-season meetings and fittingly sit tied atop the division with four games left.

Ryan Tannehill and the Titans would seem to have the easier path to winning the South — which would be their first division title since 2008 — with only one team with a winning record (Green Bay at 9-3) remaining on their schedule. They also have: at Jacksonville, home vs. Detroit (5-7) and wrap up the regular season at Houston (4-8).

Meanwhile, the Colts are winners of three of their last four, with the only loss during that stretch coming at home against the Titans two weeks ago. Philip Rivers' squad will be at Las Vegas (7-5), home vs. Houston, at Pittsburgh and home vs. Jacksonville to wrap things up.

The Texans have been competitive under interim coach Romeo Crennel, going 4-4 after a 0-4 start with Bill O'Brien. They're still probably too far back to contend but could make things interesting down the stretch with games against Indy and Tennessee.

The Chiefs earned a playoff berth last week and would have already clinched their fifth straight division title if not for since-fired Jets defensive coordinator Gregg Williams' bizarre play call that allowed the Raiders to pull off a stunning 31-28 victory at New York last Sunday.

Kansas City can take care of business itself by winning (or tying) Sunday at Miami — in the stadium where the Chiefs won their first Super Bowl in 50 years in February. A loss (or tie) by the Raiders at home against Indianapolis would also give coach Andy Reid and his Chiefs the division.

Las Vegas has been up and down all season and was 5 seconds from staring at a three-game skid, capped by an embarrassing loss to the lowly Jets. But fate — and Williams' Zero Blitz call — intervened. Jon Gruden hopes to have running back Josh Jacobs back soon from a sprained ankle and safety Johnathan Abram from a knee injury, and the Raiders will probably need them to stay in the hunt.

The Broncos (4-8) and Chargers (3-9) could be looking at coaching changes after the season, but both could have an impact in the AFC playoff hunt as they each face the Raiders once during the final stretch.