Chiefs still have positions to settle in preseason finale 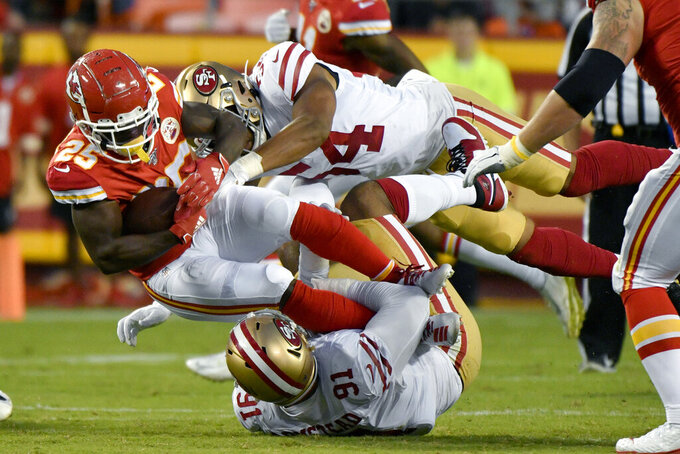 KANSAS CITY, Mo. (AP) — Byron Pringle was all smiles in the Kansas City Chiefs' locker room, the second-year wide receiver still buoyant over his jet-sweep touchdown in a preseason game against the San Francisco 49ers.

"It means a lot," he said, "because it was always my dream to become a professional athlete. A lot of people in my area look up to me. I feel like I'm a big role model back where I'm from. As long as I'm doing well, everybody back home is doing well, and they have a positive mindset."

Well, all those family and friends living along the Gulf Coast of Florida are probably smiling, too.

Not only did Pringle score a touchdown Saturday night, he also provided another reason for the Chiefs to keep him around when roster cuts are due this weekend. Pringle is competing with a handful of guys for one of the last spots on the roster, and right now he could be on the good side of the cut line.

Of course, that could change Thursday night.

Pringle and the rest of the backups are likely to get all the snaps when the Chiefs play their final preseason game in Green Bay. Patrick Mahomes and the rest of the starters will get the night off to avoid injuries and begin preparing for their season opener Sept. 8 at Jacksonville. But the fourth preseason game will be crucial for the guys trying to carve out a final spot on the roster. One of those positions is almost certainly wide receiver.

Tyreek Hill, Sammy Watkins, Demarcus Robinson and rookie Mecole Hardman are the guarantees, but the Chiefs will probably keep just two more. They just signed De'Anthony Thomas, who provides not only veteran experience but special teams ability, leaving one more spot on the roster.

Right now, it appears that Pringle is the front-runner.

Other offensive positions that are intriguing are along the line, where a handful of guys are trying to earn a backup job, and tight end, where Blake Bell has taken over the No. 2 job from Deon Yelder.

Bell earned the majority of playing time behind Travis Kelce against the 49ers, making it clear that he is the lead candidate to replace the departed Demetrius Harris. Bell may be on his fourth team in five seasons, but the former Oklahoma quarterback may have found the right opportunity in Kansas City.

"Adapting to the team and dealing with what Pat and the quarterbacks see, and learning the offense every day — you have to figure out how they see things and how the offense is run," Bell said. "Each and every day, I'm trying to get better at something."

The final preseason game also could be the last chance for Carlos Hyde to prove his worth to the Chiefs. The veteran running back signed with the belief that he could back up Damien Williams. But he has struggled to produce in practice and the first few preseason games, and has been surpassed in touches — if not the depth chart — by Darrell Williams and rookie Darwin Thompson.

Meanwhile, Thompson's star is on the rise, and he could get a long look in Green Bay as a change-up in the Chiefs' offense. The pint-sized Utah State product has the speed, hands and underrated ability to pick up the blitz that makes him invaluable in the Chiefs' passing game.

"Just getting my feet wet," Thompson said. "A little bit more comfortable with running the plays in a live situation, knowing they're trying to take my head off. Come regular season, I'll be ready."

There are also a handful of defensive guys trying to make one last impression Thursday night.

The pecking order up front has mostly been established, but Anthony Hitchens and Reggie Ragland have hardly been impressive at linebacker. Ben Niemann and Darron Lee are listed behind them on the depth chart, and both could be pushing for more playing time in the Chiefs' base 4-3 defense.

In the defensive backfield, Charvarius Ward is being pushed by Herb Miller for a backup cornerback spot, and Jordan Lucas and Armani Watts have been competing for a backup safety job.

"You're looking for if the guys are learning from a week-to-week progression. Is this guy making the same mistakes that he has been coached not to make?" said defensive end Frank Clark, whose starting job is secure. "A lot of the guys are starting to come along in that matter. Even for myself, it's a new system, new coach, it's the first year, so everything is getting thrown at us fast, but I feel like everyone, for the most part, is processing everything and doing their best to go out there and showcase on the field."

Notes: QB Matt Moore practiced for the first time Tuesday after agreeing to a deal following an injury to backup Chad Henne. Chiefs coach Andy Reid said he will not play in Green Bay. ... QBs Kyle Shurmur and Chase Litton will each get a half against the Packers, Reid said. ... TE John Lovett (shoulder) was placed on injured reserve, creating Moore's spot on the roster.