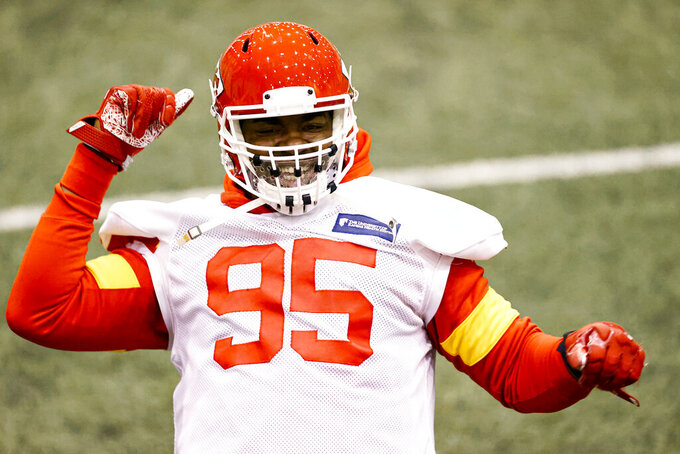 KANSAS CITY, Mo. (AP) — The cash-strapped Kansas City Chiefs made their first big first move to rebuild their offensive line Monday, agreeing with Joe Thuney on a five-year contract to provide a durable plug-and-play option at one of their interior positions.

The agent for the former Patriots standout, Mike McCartney, tweeted the sides had agreed to the deal on the first day they could discuss contracts with free agents. The deal is worth $80 million and includes some incentives, a person familiar with the terms told The Associated Press on the condition of anonymity because the deal has not been signed.

The earliest it can become official is Wednesday, when free agency officially begins.

Thuney, 28, was among the most coveted offensive linemen on the open market. He was a third-round pick of New England in the 2016 draft, and he has started all 80 games over his first five seasons in the league.

The Chiefs were more than more than $20 million over the salary cap a few weeks ago, but they wiped out most of it when they released left tackle Eric Fisher and right tackle Mitchell Schwartz. Fisher is recovering from surgery on a torn Achilles tendon and Schwartz from a back procedure, and there was no guarantee either would be available for training camp.

Still, it left the Chiefs with even more holes along an offensive line decimated by injuries and dominated in the Super Bowl.

The Chiefs expect to get offensive guard Laurent Duvernay-Tardif and third-round pick Lucas Niang back after they opted out of last season, giving them a jumpstart on the work. The draft also is heavy with offensive line prospects.

“I think people want to play with Pat Mahomes. I think that helps, too,” Chiefs general manager Brett Veach said recently, when he was asked about free agency. “Players in general are competitive. They love the opportunity to play on big stages, in national TV games. When you have sustained success and you play with a coach like Andy (Reid) and a player like Pat, they know they’ll have a chance to win and also play on the biggest stage with the brightest lights.”

Earlier on Monday, the Chiefs reworked the contracts of tight end Travis Kelce and defensive tackle Chris Jones to create about $20 in additional space, a person familiar with the situation told the AP. That combined with about $17 million the Chiefs saved by converting some of Mahomes' roster bonus into a signing bonus helps them deal with a salary cap lowered to $182.5 million along with plugging several holes on the roster.

The Chiefs, who lost to the Tampa Bay Buccaneers in a Super Bowl rout, also could be searching for help at wide receiver, pass rush and in the defensive backfield. They allowed tight end Deon Yelder become a free agent rather than tender him an offer, which means they could be in the market for a veteran backup at that position, too.

“Players have to balance things,” Veach said, “and when you have a talented roster sometimes you might not have the flexibility of a rebuilding team, but that's a good pitch to throw at players: ”Come here and play for Andy Reid and with Patrick Mahomes."