Chiefs tight end Kelce back at practice after ankle surgery 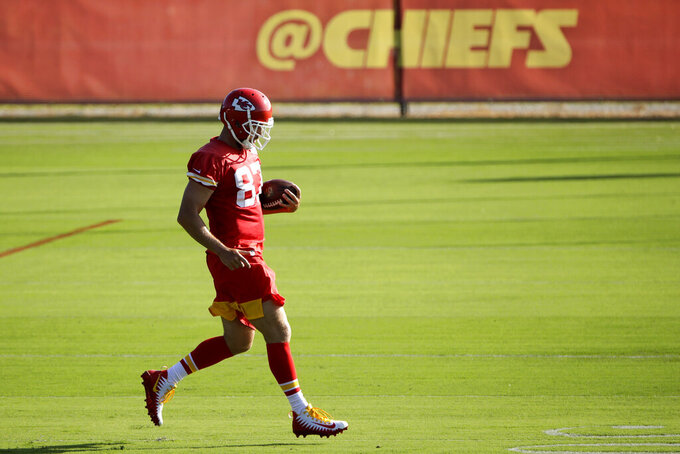 ST. JOSEPH, Mo. (AP) — Travis Kelce was back to catching passes for the Kansas City Chiefs on Wednesday.

The two-time All-Pro tight end missed the entire offseason after having surgery to solidify an ankle that had become loose over time. Kelce said he had felt discomfort in it the past couple years, mainly on Monday and Tuesday, when his entire body was still sore from a Sunday game.

"I mean, it was nothing I was doing," he said. "It was just the misfortune, over the course of my career I rolled my ankle so many times that the ligaments in there were kind of stretched out."

The procedure early this spring essentially tightened up the ankle, and it kept Kelce from doing any running for about three months. That means he spent the team's voluntary summer workouts and its mandatory minicamp on the sidelines, absorbing constant "Coach Kelce" ribbing from teammates.

Kelce insisted he would be ready for the start of camp, but a watershed moment may have come during a recent trip to Turks and Caicos with quarterback Patrick Mahomes and wide receivers Demarcus Robinson and Gehrig Dieter. Mahomes was throwing passes to the other three on the soft, sandy beach, and the instability was a good test to see just how strong Kelce's ankle had become.

"There were times my ankle got caught in an awkward position, just running around," he said, "and I can tell you, last year, two years ago, that thing would have been rolled and I would have been just sitting there, watching guys catch passes on the beach instead of doing it myself."

Rookies, quarterbacks and select veterans reported to Missouri Western State University for the start of camp on Tuesday, and their first workout was on a postcard-perfect Wednesday morning.

Kelce was right in the mix, catching the first couple of passes of 7-on-7 and team drills.

He didn't have to report early: The rest of the veterans arrive Friday with the first full-squad workout scheduled for Saturday. After all, Kelce has earned that right after three consecutive seasons of at least 1,000 yards receiving, and a career-best 1,336 yards and 10 touchdowns last year.

But the 29-year-old Kelce, who inked a five-year, $46 million contract extension in January 2016, figured it was best to arrive with the rookies. It not only gave him a few extra practices to get back into football shape, it also provided an opportunity for him to mentor the younger players.

"I'm willing to work. That's the biggest thing," Kelce said. "It's a little different when you see a guy out here going through the motions, walking the walk. Just being out here, working with the guys, showing them, 'This is how we do it here.' Showing them by example."

Kelce has his work cut out for him.

The Chiefs are perilously thin behind him at tight end after losing Demetrius Harris in free agency, and they could be in the market for a veteran backup once roster cuts happen.

But for now, former Oklahoma quarterback-turned-journeyman NFL tight end Blake Bell is No. 2 on the depth chart with unheralded Deon Yelder trailing him.

Regardless of how the depth chart shakes out, the Chiefs know who their No. 1 tight end will be.

NOTES: Second-round pick Juan Thornhill was at practice after missing part of the offseason work with a calf injury. The young safety is expected to compete for a starting job. "They told me it was going to be OK. Just get treatment and get better," he said. "That's the main thing." ... The rookie workouts are closed to the public this week, but the first full-squad practice Saturday is open.