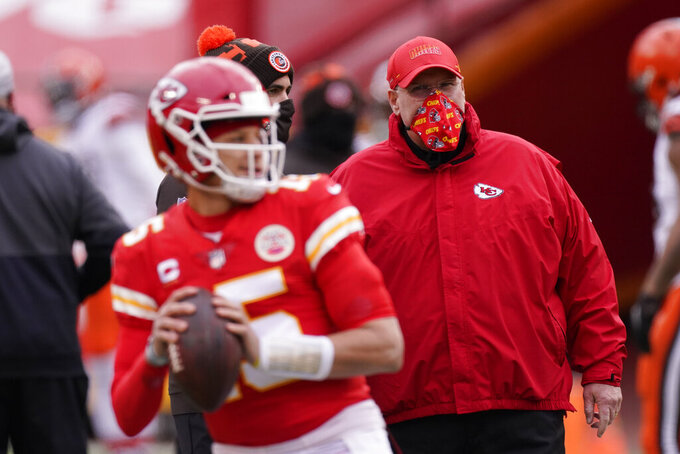 FILE - In this Sunday, Jan. 17, 2021 file photo, Kansas City Chiefs head coach Andy Reid, right, watches quarterback Patrick Mahomes warm up before an NFL divisional round football game against the Cleveland Browns in Kansas City. On Feb. 7, 2021, the Kansas City Chiefs will be the latest franchise to attempt winning successive Super Bowls when they take on the Buccaneers. In Tampa, of all places. Against Tom Brady, of all people. Only twice since the Patriots pulled off the last repeat in the 2003 and 2004 season has a champion gotten back to the big game. Seattle failed in 2014 against New England, no less; remember Malcolm Butler's goal-line interception? and the Patriots in 2017, the Super Bowl featuring the Philly Special. (AP Photo/Charlie Riedel, File)

Not in the NFL, at least not lately.

On Feb. 7, the Kansas City Chiefs will be the latest franchise to attempt winning successive Super Bowls when they take on the Buccaneers. In Tampa, of all places. Against Tom Brady, of all people.

It's an achievement simply to get this far once again.

“The thing I can see as a positive is the record, that we’ve persevered through some tough games," Chiefs coach Andy Reid said, "and so the mental toughness to do that individually each week was important, knowing that you’re going to get people’s best shot, and there’s the respect factor.

"They didn’t question each other, they didn’t question the coaches, they stayed focused and delivered. However, that falls in, I’m not sure how to categorize that, but I just think that might have been the biggest challenge. You’ve seen that with teams, when things aren’t going right, they just kind of fall apart there. Our guys have not done that, they all stuck together and trusted.”

Only twice since the Patriots pulled off the most recent repeat in the 2003 and 2004 seasons has a champion gotten back to the big game. Seattle failed in the 2014 season — against New England, no less; remember Malcolm Butler's goal-line interception? — and the Patriots in the 2017 season, the Super Bowl featuring the Philly Special.

Super Bowl repeats once were relatively common. The first two went to the Lombardi Packers. Don Shula's Dolphins soon replicated the feat, even throwing in a perfect season for 1972. And Pittsburgh's Steel Curtain not only went back to back in the 1974 and ‘75 seasons, they did so again in 1978 and ’79.

We're not done. The Bill Walsh/Joe Montana 49ers were the 1988 and ‘89 champions; Dallas and its Hall of Fame Triplets of Emmitt Smith, Troy Aikman and Michael Irvin pulled off the double in 1992 and ’93; then John Elway finished off his illustrious Broncos career with two straight NFL titles in 1997 and '98.

“It's hard, you know?” Brady has said — and he is heading to his record 10th Super Bowl.

Brady led New England to its first NFL title in the 2001 season, a second-year backup until Drew Bledsoe suffered a chest injury in the second game of the schedule. After missing the playoffs entirely in 2002, the Patriots were primed for another championship challenge the next year. They put together a league-best 14-2 record sparked by the defense (238 points allowed, an NFL low) at a time when Brady was not yet an offensive force.

That defense featured one Pro Football Hall of Famer, cornerback Ty Law; a 2021 finalist for the hall, lineman Richard Seymour, and such other notables as Tedy Bruschi, Rodney Harrison, Willie McGinest and Mike Vrabel.

But Brady was the man in a weird Super Bowl in Houston, when no points were scored in the opening or third quarter. But 61 points were packed into the other two periods, and Brady went 32 for 48 for 354 yards with three touchdowns and one interception.

After the Panthers tied it 29-29, John Kasay kicked off out of bounds. From there, Brady led the winning drive to Adam Vinatieri's 41-yard field goal.

“I don’t know how I do it,″ Brady said then, with a laugh. “We just were trying to keep our poise. You realize in games like this you’ve got to play for 60 minutes. We made enough plays toward the end to win it. ... That’s what happens in Super Bowls.”

As it did against the Rams a couple of seasons before.

“Maybe it was a little deja vu of two years ago,” Vinatieri said then. “Tom did it again, he’s amazing. This supporting cast did it again and gave me a chance.”

After winning the 2001 title, New England faltered and failed to make the postseason the next year. Applying lessons they learned from that disappointment, the Patriots again went 14-2 in 2004. Brady was becoming more of a presence as a passer, though his targets weren't standouts; Randy Moss, Rob Gronkowski and Julian Edelman weren't yet aboard.

Corey Dillon rushed for 1,635 yards and 12 touchdowns in support, and the defense again was stout. Unlike in the previous postseason when the playoff games were close, the Patriots weren't challenged in the AFC chase to the Super Bowl, not even by a Steelers team that went 15-1 in the regular season.

They were tested by the Eagles in the championship match, though. Philadelphia, coached by Reid, had lost three consecutive NFC title games before beating Atlanta to advance to the Super Bowl in Jacksonville.

Brady did not win a third MVP in this Super Bowl — that would have to wait 10 years for that to happen. He finished 23 for 33 for 236 yards with two touchdowns, one to linebacker Vrabel. Deion Branch, coming off a mediocre season, had 11 receptions for 133 yards to earn MVP honors.

Pretty much everyone else knew.

So now, the man mainly responsible for the previous repeat will try to prevent the next one, and perhaps the next NFL dynasty. Against the same coach he secured the most recent double.