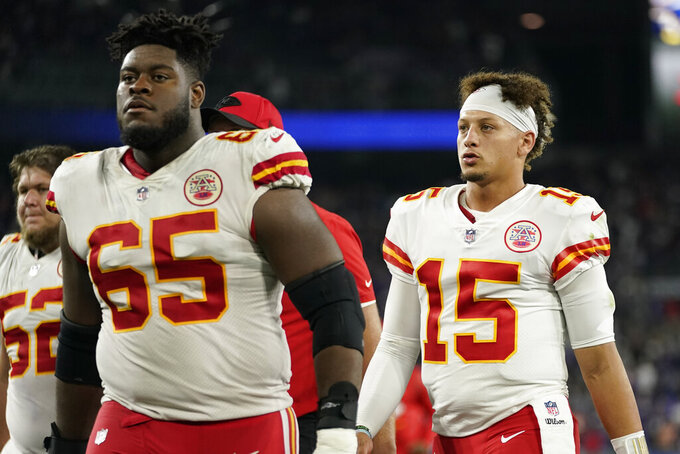 OPENING LINE: Chiefs by 6 1/2, according to FanDuel SportsBook.

TURNOVER DIFFERENTIAL: Chargers minus-2; Chiefs plus-2.

CHARGERS PLAYER TO WATCH: WR Mike Williams is off to the best start of his five-year career with 15 receptions for 173 yards and two touchdowns. Williams was mainly a deep threat the past two seasons, but eight of his receptions have come within five yards of the line of scrimmage after he had 12 last season.

CHIEFS PLAYER TO WATCH: FS Tyrann Mathieu returned from a stint on the COVID-19 list to pick off two passes and return one for a touchdown against the Ravens. But he also was whistled for two penalties and acknowledged after the game that he was still getting his legs back under him.

KEY MATCHUP: Chargers RB Austin Ekeler vs Chiefs DL. The Chargers have the fourth-best pass offense through the first two weeks of the season, but the key on Sunday may be whether Ekeler can get going against the league's worst rush defense. Kansas City is allowing more than 200 yards per game on the ground.

SERIES NOTES: The Chiefs have won 12 of their past 14 games against the Chargers dating to their days in San Diego. And while the Chargers are coming off a 38-21 victory at Arrowhead Stadium in January, it came while the Chiefs rested most of their starters with their playoff positioning already secure.

STATS AND STUFF: The Chargers have won three straight against the AFC West on the heels of a nine-game skid. … Los Angeles is converting a league-best 61.5% of third downs. … Chargers QB Justin Herbert has 10 games with 300 or more passing yards, which is tied with Chiefs QB Patrick Mahomes and Dan Marino for most in a player’s first two seasons. … Ekeler had 115 yards from scrimmage last week. He is averaging nearly 110 in his last five games against Kansas City. … Chargers DE Joey Bosa has four sacks in his last three road games. … FS Nasir Adderley had a career-high nine tackles for Los Angeles last week. … CB Asante Samuel Jr. had his first interception last week. At 21 years, 351 days of age, he is the youngest Chargers player in the last 25 years to pick off a pass. ... The Chiefs' loss to Baltimore snapped a 14-game winning streak in the month of September. ... Kansas City is 31-4 in its last 35 divisional games. ... Chiefs coach Andy Reid needs five wins to pass Curly Lambeau (226) for fifth-most regular season wins. Reid needs one win to become the first coach with 100 at two different franchises. He had 140 with Philadelphia. ... Mahomes threw the first interception in September of his career last week, though he also threw three TD passes against the Ravens. ... Mahomes has 120 TD passes, moving past Trent Green (118) for second in Chiefs history. Len Dawson has the record with 237. ... Mahomes has thrown a TD pass in a Chiefs-record 27 straight games. ... Mahomes needs 168 yards passing to become the fastest in NFL history to 15,000 yards (49 games). ... Chiefs TE Travis Kelce had seven catches for 109 yards against Baltimore, giving him 8,066 yards for his career. He needs 284 yards to pass Jimmy Graham for seventh among NFL tight ends. Tony Gonzalez has the record with 15,127 yards. ... Kelce and Gonzalez are tied for the Chiefs record with 26 games of 100 yards receiving. ... Kelce is tied with Jarvis Landry for the third-longest active streak of games with a catch (112). ... WR Tyreek Hill needs two TDs to tie Larry Johnson (61) for fourth in Chiefs history.

FANTASY TIP: Chargers WR Keenan Allen is the only receiver in the league to have 100 yards receiving each of the first two weeks, and he could have a big game against a defense that has struggled to generate any pass rush. Allen already has TD catches in two of his past three games against Kansas City.