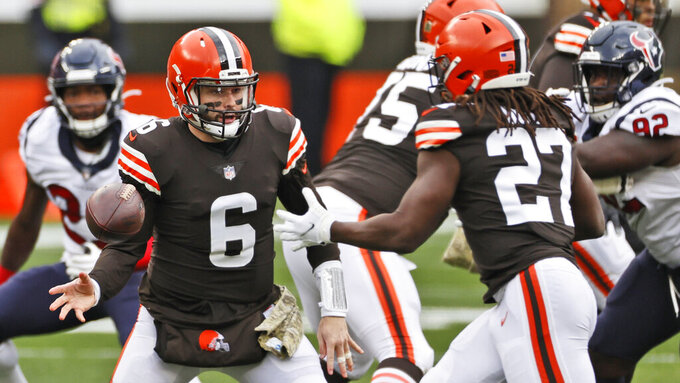 Cleveland Browns quarterback Baker Mayfield (6) tosses the ball to running back Kareem Hunt (27) during the first half of an NFL football game against the Houston Texans, Sunday, Nov. 15, 2020, in Cleveland. (AP Photo/Ron Schwane)

In their first game back from the bye on Sunday, the Cleveland Browns may have found the formula to carry them into the NFL playoffs.

Cleveland's dynamic duo combined for 230 yards and helped the Browns (6-3) chew up the final five minutes on the ground for a 10-7 win over the Houston Texans in a game in which both teams dealt with extraordinary weather conditions that never eased.

“I'll remember getting pelted in the face with sideways hail,” Browns coach Kevin Stefanski said Monday, also noting the long-range forecast for next week's game against Philadelphia calls for rain.

Chubb showed some early rustiness before finding his stride in his first game back since spraining his right knee on Oct. 3. He picked up 126 yards on 19 carries and showed on one ego-less play why his teammates and coaches hold him in such high regard.

With the Texans out of timeouts, Chubb broke off a 59-yard run with just over a minute left that he ended by veering out bounds at the 1-yard line instead of scoring. The move prevented the Texans from getting the ball back and allowed Browns QB Baker Mayfield to kneel and end the game.

While Chubb's move may have upset gamblers and fantasy football owners, the savviness epitomized his team-first attitude.

“He is honestly one of the best teammates I have ever been around on any level of football,” said guard Joel Bitonio. "He is all about the team. He is tough. He played hard. The guy rehabbed like crazy to get back, how quickly he got back with his injury and stuff. It is just a testament to that guy. That is a guy you love to play with.”

Hunt was equally effective, rushing for 104 yards on 19 carries and picking up first downs after the Browns were backed up at their 3 to start their final drive.

With legendary Browns running back Jim Brown watching from a suite, Chubb and Hunt became the first Cleveland backs since Leroy Kelly (113) and Ernie Green (103) on Oct. 8, 1966, to rush for 100 yards in the same game. Their styles differ, but Chubb and Hunt share a single-minded purpose when they've got the ball.

“When I watch Nick, it’s like watching poetry in motion,” said defensive end Myles Garrett. “Kareem, he’s just a force. He’ll run through you, he’ll go by you, he’ll stiff-arm you. He runs real aggressive.”

Stefanski has strived for a balanced offense. But he may have to be a little lopsided going forward if Hunt and Chubb keep rolling.

Stefanski has a two-pronged weapon no team can match.

Cleveland's offensive line is clicking again. With right guard Wyatt Teller back in the starting lineup after missing three games, the Browns were in sync up front. The group punished Houston's defensive front — not exactly one of the league's best — while neutralizing Texans star end J.J. Watt.

It's a little nit-picky given the weather conditions, but Mayfield missed some short throws. Mayfield did connect on a couple clutch passes, but Cleveland's aerial game hasn't been the same since wide receiver Odell Beckham Jr. suffered a season-ending knee injury.

Garrett's finally getting some help from the rest of the Browns' defensive line. The unit penetrated and put pressure on Watson while holding the Texans to 90 yards rushing.

Sheldon Richardson was credited with two half-sacks and Larry Ogunjobi split one with Garrett, who has 9 1/2 and continues to play as well as any defensive player in the league.

“Out of his mind,” Ogunjobi said. "The proof is in the pudding. You turn the tape on, he is always flashing and always making plays. And that is just the player he is.”

The Browns drew two personal fouls that could have affected the outcome.

Wide receiver Jarvis Landry was whistled for taunting after a catch in the first half. Linebacker Mack Wilson, with some help from safety Ronnie Harrison, drew an unnecessary roughness call when they flipped Texans receiver Randall Cobb.

"We can’t have that,” Stefanski said. “That’s undisciplined that I don’t expect from those two players in particular. I know they’d like to have those plays back. With Mack’s, I know there’s a physicality that you’d like to play with, but you’ve got to play within the rules.”

The Browns continued a recent positive trend as Stefanski reported no significant injuries.

The Browns have a legitimate shot at making the postseason for the first time since 2002 and can't afford to slip against the NFC East-leading Eagles (3-5-1) before playing two straight road games.