Chubb's return against Texans boosts Browns for second half 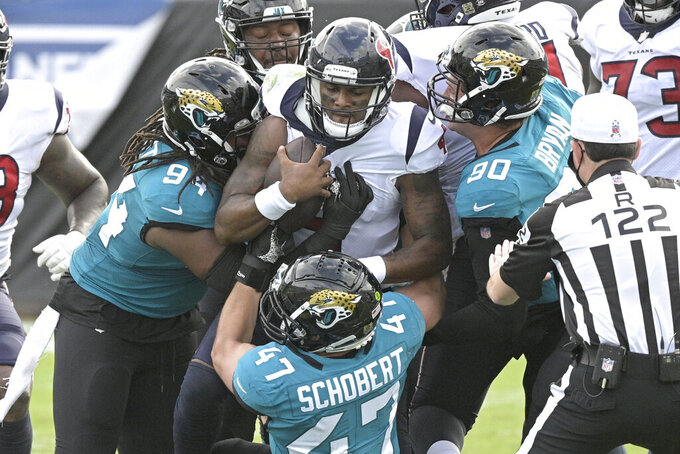 CLEVELAND (AP) — Nick Chubb spent the past five weeks watching, waiting, brooding. He's finally back doing what he enjoys most and does best: playing.

Shelved four games by a sprained right knee that slowed Cleveland's potent rushing attack significantly, the Pro Bowl back is set to return to the lineup Sunday as the Browns (5-3) return from the bye week and host the Houston Texans (2-6).

Chubb's return has his teammates elated.

“Nick is damn near superhuman,” said right guard Wyatt Teller, also back after missing three games with a calf strain.

Chubb hasn't played since Oct. 4, when his knee got bent awkwardly in the first quarter of a win over the Dallas Cowboys. It wasn't the first knee injury for Chubb, who suffered a major one to his left knee while he was at Georgia, so the 24-year-old was prepared for the endless hours of rehab it would take to get back on the field.

That didn't make the time away any easier.

Now that he's healthy, Cleveland's ground game should be more fit as well.

The Browns were leading the NFL with more than 200 yards rushing per game when Chubb went down. They've dropped to fifth with a 150.0 yard average, but the combination of Chubb and Kareem Hunt might be able to push that up against a Houston defense that is the league's worst at stopping the run (159.5 yards per game).

“Nothing against our other backs because we believe in those guys as well, but having that two-headed monster of those guys being able to sub fresh legs in as needed, that is something that we are extremely blessed to have,” said Browns quarterback Baker Mayfield.

With rain in the forecast, Texans interim coach Romeo Crennel expects the Browns to pound the ball.

The Browns are coming off a bye week devoted to fixing some of the inconsistencies that plagued them in the season's first half.

Cleveland reached the midpoint with a winning record for just the third time since 1999, and while coach Kevin Stefanski is doing all he can to keep his players focused on the here and now, the Browns have a realistic shot at ending a playoff drought dating to 2002.

“Obviously, that is the end goal, but we have to take it one game at a time,” said Mayfield. "We are excited about this back half of the year and the grind that it is going to be.”

J.J. Watt showed off his offensive skills the previous time he played in Cleveland.

The three-time NFL Defensive Player of the Year had one of his three touchdowns in 2014 on a 2-yard TD reception for Houston’s first score in a 23-7 victory. He lined up at tight end and pulled down a pass from Ryan Mallett.

“It was a good throw,” Watt recalled. "It was either going to be I caught it, or it went out of bounds.”

Watt also had a strip sack and recovered a fumble. It wasn't a perfect day as he was penalized twice for roughing the punter.

“I thought for sure I was going to block each of those punts,” he said. “I had to be like an inch away. So, the strip-sack and the touchdown were kind of my way to pay back the team."

The bye week gave the Browns a chance for bumps and bruises to heal. In addition to Chubb and Teller returning, tight end Austin Hooper is back after sitting out two games following an appendectomy.

Mayfield and receiver Jarvis Landry are both feeling much better after dealing with broken ribs.

“It is amazing what just not getting hit on one Sunday does for you,” Mayfield said.

While Houston's record might be disappointing, quarterback Deshaun Watson has maintained his high standards.

He's thrown 17 TD passes, just five picks and is completing 68.3 percent of his passes. Add in his mobility, and it's easy to understand why the Browns are nervous.

“Very dangerous,” Cleveland defensive coordinator Joe Woods said of Watson. “I have not slept very much this week. You can just tell just in terms of their offense and how they put it together with the run and pass game."

Houston's interim coach had two stints with the Browns, serving as defensive coordinator in 2000 before taking over as coach from 2005-08.

In 2007, the Browns went 10-6 — their best record since 1999— under Crennel but missed the playoffs because of a tiebreaker.

“That was a great season,” Crennel said. ”Generally you are supposed to make the playoffs when you win 10.”

Stefanski said he hasn't considered hanging around that long.

“He has done it at a high level,” the 38-year-old Browns coach said of Crennel. “He has won Super Bowls. I am impressed with what he is doing with the team right now. He should keep going as long as he is having fun doing it.”