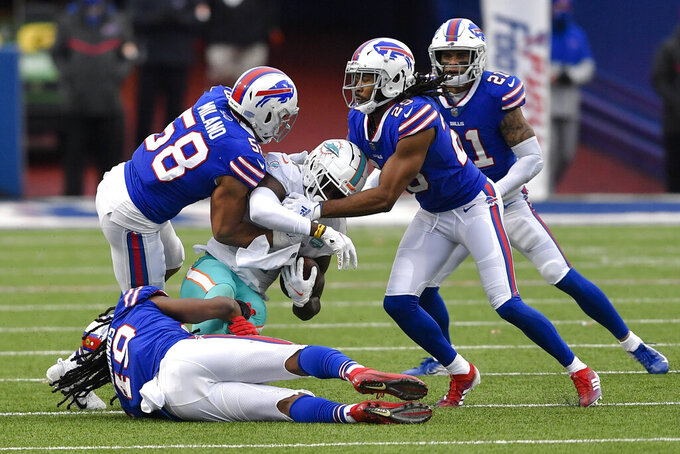 MIAMI (AP) — After a great leap forward, the Miami Dolphins backslid badly in their final game, leaving lots of questions for an offseason that will be as long as ever.

A 56-26 loss at Buffalo cost the Dolphins a playoff berth and carried extra sting because the blowout rudely ended what had been a feel-good season.

“Embarrassing,” defensive end Emmanuel Ogbah said Monday. “It definitely left a sour taste in my mouth. But the season is over. We have to use that as fuel. 2021 is our year.”

The drubbing was especially tough to swallow given the dramatic improvement Miami made in Season 2 under coach Brian Flores.

The Dolphins doubled their win total to 10, and despite the rout in the finale, they improved their point differential by 254 points. After allowing a franchise-record 494 points in 2019, Miami led the NFL in scoring defense entering the final week and finished sixth at 338.

The last game, however, showed a yawning gap persists between the Dolphins and the best team in the AFC East. Only now it's the Bills, not the New England Patriots.

On Sunday, the Dolphins' biggest game of the season became by far their worst. They lost to Buffalo for the fifth time in a row and were manhandled even though the Bills' starters sat out much of the game.

The loss was the Dolphins' 176th since their most recent playoff victory 20 years ago.

Bad luck has been a chronic problem for the Dolphins over the past couple of decades, and it's the reason they're the first 10-win team to miss the playoffs since the 2015 New York Jets.

One thing bounced Miami’s way Sunday -- a last-second Tennessee Titans field goal that beat Houston, locking in the Texans' top 2021 draft pick at No. 3 overall. The Dolphins own that pick thanks to a 2019 trade that sent tackle Laremy Tunsil and receiver Kenny Stills to Houston.

The Dolphins' biggest offseason decision will be whether to use that pick to draft a quarterback — again. Tua Tagovailoa was the No. 5 overall selection a year ago, became Miami's No. 1 QB in Week 8 and went 6-3 as the starter.

“Tua has made a lot of improvement and really developed over the course of the year,” Flores said.

But the season suggests that Miami took the wrong quarterback last April by choosing Tagovailoa over Justin Herbert. Tagovailoa regressed in the final few weeks and had his worst performance at Buffalo, throwing three interceptions, including a pick six.

Flores benched Tagovailoa in two games, and it would have been three if ailing backup Ryan Fitzpatrick had been available Sunday. The final game "just seemed a little bit too big for Tua," CBS analyst Bill Cowher said.

It's uncertain whether Fitzpatrick or offensive coordinator Chan Gailey will return.

Fitzpatrick, 38, made seven starts and had the second-highest passer rating of his 16-year career. Gailey, who turns 69 on Tuesday, came out of retirement and helped the Dolphins score 404 points, their highest total since 1986.

But the defense's knack for takeaways was the team's most potent weapon, and Gailey's conservative play-calling with Tagovailoa often left the offense sputtering. The rookie rarely threw downfield, and his longest completion all season was 35 yards.

Neither Fitzpatrick nor Gailey has said publicly whether he wants to return next season. Regardless, the Dolphins are anxious to improve the offense by adding playmakers that were lacking at receiver and running back.

Cornerback Xavien Howard was Miami's best player, and that was true even amid Sunday's stench. He came up with his 10th interception, the most by an NFL player in 13 years.

Howard tied the 53-year-old franchise record for interceptions, and he also led the league in passes defended with 20. Since 2017, he has 22 interceptions, four more than any other player.

What a strange statistical season it was for the Dolphins.

They ranked 20th in yards and 22nd in yards allowed, finishing in the lower half of the league in both categories for the sixth year in a row. They were outgained by 462 yards.

But a point differential of plus-66 was their best since 2002 and resulted largely from a ball-hawking defense that led the league with 29 takeaways and also ranked first in third-down stops.

“I feel like we’ve got something here,” Howard said. “Everybody believes in Flores, and we believe in everybody on the staff. We came up short, but I feel like the future is bright us.”