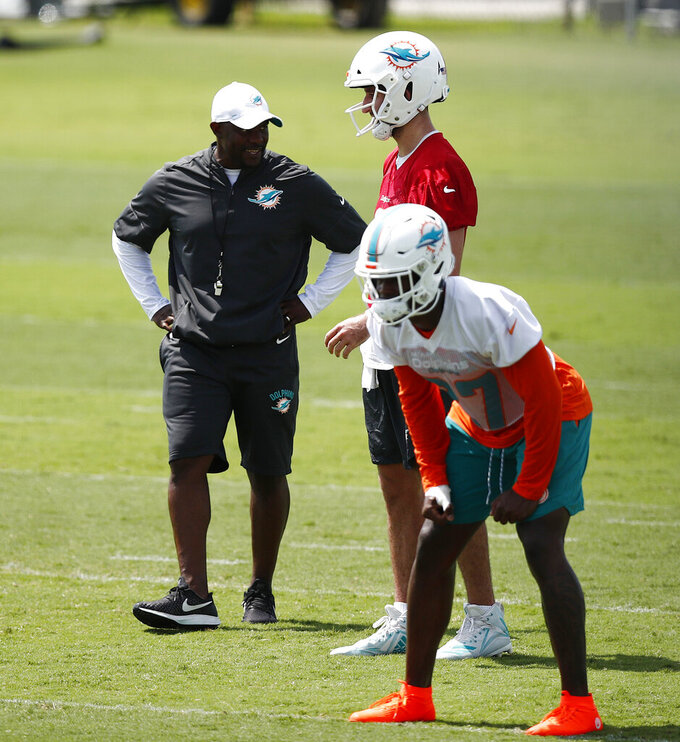 DAVIE, Fla. (AP) — Brian Flores loves fullbacks as a coach because he hated them as a linebacker.

That small but illuminating revelation came Wednesday, helping a bit to answer the biggest question around the Miami Dolphins these days: What is the new coach like?

Fans and players won't really know until Flores and the Dolphins start winning and losing this fall. Flores acknowledged he's still in the early stages of a multiyear rebuilding effort ordered by owner Stephen Ross, and one phase ends next week with the conclusion of offseason practices.

"We're moving in the right direction," Flores said. "We've got two weeks left. We need to finish strong. That's the challenge to the group."

For Flores, who took over a team that doesn't have a postseason victory since 2000, the challenge is to establish a winning culture. He's trying to do that in ways large and small.

"It's ongoing," he said. "It's something new every morning. I can't give it all to them every day, so I try to give it to them in bits.

"We're trying to build a culture that is about improvement, hard work and competition, but also about honesty and humility. Those are core values of mine. When you're not doing those things, that's when I get a little bit upset."

Flores was hired following 15 seasons with the New England Patriots, and four months into the job, his stamp on the Dolphins' battered brand is becoming increasingly evident.

One example: a wall in the corner of the practice field that bears the initials TNT, for "takes no talent." Players called out for mistakes during practice must run to the wall and back as punishment, a way of bringing discipline to a team that lacked it last year.

"The expectations when we step on the practice field have been set right away in terms of the hustle and the competitiveness," said well-traveled quarterback Ryan Fitzpatrick, who has experienced the difference between good teams and bad. "We're going to practice the right way. That has been a point of emphasis, and it's something I enjoy."

Flores has said every starting job is open, and while that's probably not true, players embrace his emphasis on competition and discipline.

"Competition creates chemistry," cornerback Bobby McCain said. "When you're out here and you're balling and the loser does push-ups, no one wants to do push-ups."

While the team adjusts to Flores, he's adjusting to being a head coach for the first time. Check back after he has lost on a last-second field goal, but so far he enjoys the job.

"I love coaching," he said. "I'm passionate about it. It's just a bigger group I get to impact. Challenging them and being demanding is important to me. That's how you bring out the best in people. I love being in front of a big group."

A big spotlight comes with that. Flores will be under a microscope this year for his development of potential franchise quarterback Josh Rosen, who was acquired from Arizona last month and is competing with Fitzpatrick for the starting job .

More immediately, Flores must deal with the potentially polarizing status of two-time Pro Bowl safety Reshad Jones, who was unhappy about his playing time under departed coach Adam Gase and is skipping the offseason organized team activities , which are voluntary.

When asked about Jones' playing time this year, Flores said it's to be determined.

"There are no sacred cows, not in this game," the coach said. "You've got to earn what you get. That's the case for everyone on this team."

Even at fullback — although the Dolphins are likely to keep one on the roster, perhaps seventh-round draft pick Chandler Cox of Auburn.

"I value that position," Flores said. "It brings a toughness and grit I like in my team. I played linebacker, and I've had to deal with fullbacks. It's not always the easiest thing to do."