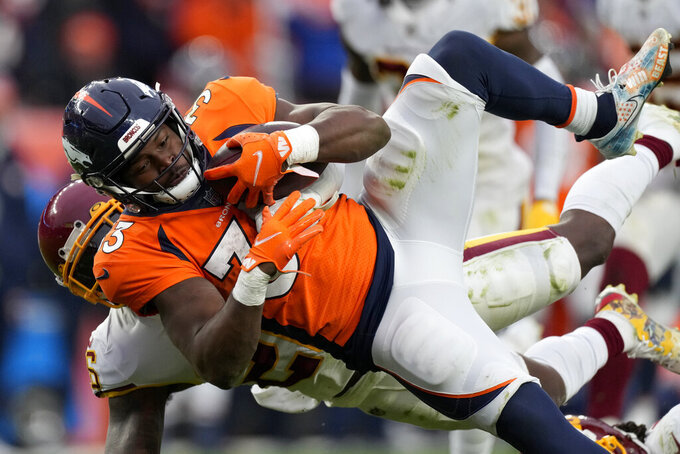 This weekend would be an ideal time.

The Broncos (4-4) travel to Dallas to face a Cowboys team that’s reeled off six straight wins since a last-second loss to Tampa Bay and is averaging 32.1 points per game.

That’s the type of proficiency common in Denver when Peyton Manning was leading the team's high-scoring offense and hollering out, “Omaha! Omaha!”

Since then, it’s been plenty of “OMG! OMG!” as the Broncos sputter and wheeze their way around the field.

Despite 11,755 no-shows, the crowd that trudged out of their stadium Sunday sounded more like one lamenting another loss than celebrating a 17-10 over Washington.

The Broncos failed for the 23rd time in 24 tries under Shurmur to score a touchdown on their opening drive. The end was even uglier.

Justin Simmons was still celebrating his seemingly victory-sealing end zone interception with 37 seconds left when the Broncos botched things so badly the defense had to go back in and make another stop.

In between Teddy Bridgewater inexplicably throwing an incompletion to stop the clock with 32 seconds left and saving Washington a timeout, the Broncos fumbled twice, first by rookie Javonte Williams and then by veteran Melvin Gordon III. They lost that one at their 24 with 21 seconds remaining before Denver's defense held on to snap a four-game skid.

That was reminiscent of the time in 2019 that Fangio celebrated a last-second 23-20 win over the Chargers by saying his then-offensive coordinator Rich Scangarello had advised him to play for overtime and for Drew Lock take a knee at the Broncos 28 with 9 seconds left. Fangio overruled him and Courtland Sutton drew a 37-yard pass interference flag, setting up Brandon McManus' winning field goal.

On Monday, Fangio blamed himself for Denver's botched final offensive series against Washington. He said he signed off on the bootleg call on second down, confident Bridgewater would slide if the throw wasn't there and force Washington to call a timeout.

“If you’re going to second guess anybody, you should second guess me on it because I approved it,” Fangio said.

The next day, general manager George Paton mixed words of admiration and admonition for Shurmur, a former head coach with the Giants and Browns.

“We need to be better on offense. Pat knows that, and we all know that. Our players know that," Paton said. "Pat’s had a lot of success in this league. I believe in Pat, but we do need to play better.

“We just don’t seem to have a lot of rhythm. We’re not good in the critical downs and critical areas of the field. We were this past weekend, but we need to run the ball better. There’s a lot of things, but they’re working on it. Pat has had a lot of success, so I do believe in Pat.”

It's up to Fangio and Shurmur to reward their GM's faith for them to return next season. Paton put everyone on notice when he said the trade of Von Miller to the Rams this week doesn't mean this is a rebuild, and at 4-4 they're still in playoff contention.

As far as Denver's final series Sunday, Shurmur argued Thursday it's not uncommon to run a play-action pass and “we certainly didn't go out there with the idea that we were going to put the ball on the ground. ... You just hope that that happens to those guys once in a lifetime and never again."

Incidentally, one of the main gripes about Shurmur's play calling this season has been his early abandonment of the ground game.

Injuries have stifled the Broncos' hopes for an explosive offense in 2021.

Jerry Jeudy returned last weekend after missing six games with a sprained right ankle, and Albert Okwuegbunam missed three with a hamstring injury before returning last week. KJ Hamler is on IR with a torn ACL and a vaccinated Noah Fant is in COVID-19 protocol.

The Broncos rank 23rd with a 19.63 scoring average. In October, they averaged just 16.2 points per game.

None of this is new in Denver. The Broncos have struggled to score ever since Manning called it a career a month after winning Super Bowl 50.

The Broncos averaged 30.06 points during Manning's four-year run in Denver from 2012-15, including a whopping 37.88 in 2013 when they scored an NFL-record 606 points only to get routed by Seattle in the Super Bowl. They averaged 22.19 points a game two years later when their defense drove them past Carolina for the title.

They haven't even reached that level in the six seasons since as they've averaged a mere 19.46 points per game post-Manning.