Coach: McCaffrey out 'a few weeks' with hamstring injury 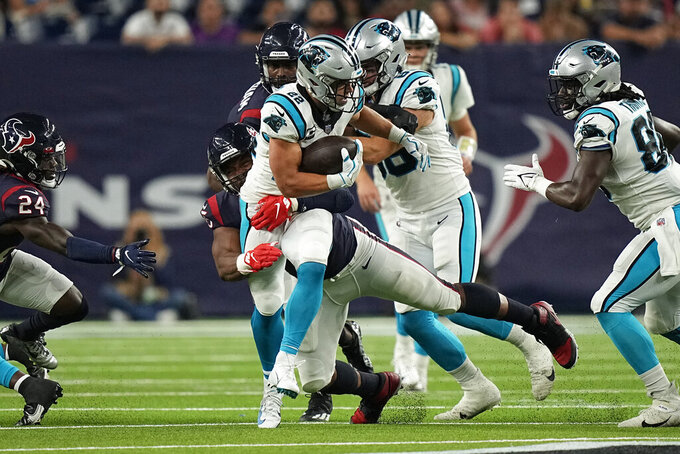 Carolina Panthers running back Christian McCaffrey (22) is tackled by Houston Texans' Paul Quessenberry during the first half of an NFL football game Thursday, Sept. 23, 2021, in Houston. (AP Photo/Eric Christian Smith)

Panthers coach Matt Rhule said Friday that the 2019 All-Pro running back is expected to miss “a few weeks” with a strained hamstring. Rhule said the injury could sideline McCaffrey up to four weeks, but said he doesn’t know at this point if McCaffrey will go on injured reserve.

“They are still doing a bunch of diagnostic testing so I can’t tell you if that is one, two, three or four weeks,” Rhule said Friday on a Zoom call. “Obviously Christian will decide the best course of action for him getting back as soon as possible."

The news isn’t as good for rookie cornerback Jaycee Horn, who has three broken bones in his foot and could miss the remainder of the season. Rhule said Horn and his family will decide after further consulting with doctors what the best course of action, but it’s clear he won’t be back anytime soon.

“I can't tell you at this point if that is season ending or not,” Rhule said.

Rhule also said safety Juston Burris has a groin injury, but it hasn't been determined how much time he will miss.

McCaffrey was injured in Carolina’s 24-9 win over the Houston Texans on Thursday night when he pulled up after making a stutter step while running a sweep play on the team’s third possession. He had 31 yards on seven carries, but did not return.

Rookie Chuba Hubbard is expected to take over for McCaffrey as the starter, while Royce Freeman will also see carries. Hubbard ran for 52 yards on 11 carries against the Texans, while Freeman had five carries for 17 yards.

This is yet another frustrating injury for McCaffrey, who hasn't been able to consistently stay on the field since becoming only the third player in NFL history to gain 1,000 yards rushing and receiving in the same season.

McCaffrey was off to another solid start this season for the unbeaten Panthers with 201 yards rushing on 52 carries and one touchdown, along with 16 receptions for 163 yards. The team counts on him to set up the play-action passing game.

Quarterback Sam Darnold said McCaffrey was “sad” after the game.

“He's a special player," Darnold said. “I don't know if there is any way to describe him. He's someone who can align anywhere and I think the greatest way to to see how great a player is, is by how the defense game plans for them. When Christian is out there you can see when he starts to line up in different ways that defenses have certain checks for him when he's out there. That's the sign of a really good player.”

The Panthers play at Dallas on Oct. 3.

Horn, the first defensive player selected in this year’s NFL draft, suffered broken bones in his foot while back-peddling in a non-contact play against the Texans. He fell to the ground and immediately signaled for help from the trainers.

The Panthers feel Horn has the physical and mental makeup to be a shutdown cornerback in the league and rookie had already made his mark in the first two weeks of the season as a starter.

“I hate losing players,” Rhule said. “It breaks your heart.”

A.J Bouye or Rashaan Melvin is expected to take his place in the starting lineup. Bouye hasn't played this season yet after missing two games while serving a suspension. He was held out of the Texans game.

Burris started 13 games last season for the Panthers and had 53 tackles and one interception.