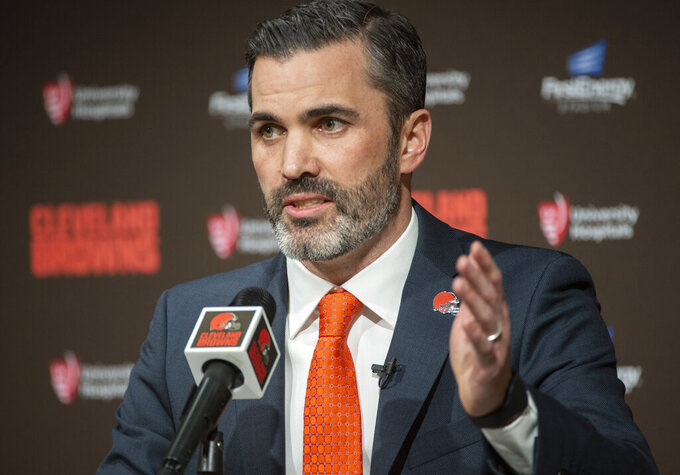 FILE - In this Jan. 14, 2020, file photo, Cleveland Browns NFL Football head coach Kevin Stefanski answers a question during a news conference at FirstEnergy Stadium in Cleveland. When Stefanksi was hired by the Browns in January, the first-time NFL coach knew he'd face major challenges while preparing for his first season. Stefanski never imagined doing it in the midst of a global pandemic and nationwide civic unrest. (AP Photo/Phil Long, File)

CLEVELAND (AP) — When Kevin Stefanski was hired by the Browns in January, the first-time NFL head coach knew he'd face major challenges while preparing for the season.

There was an urgency to build team chemistry, install schemes, meet players and gain their trust. There were mini-camps and meetings, media commitments and more.

So much to do. So little time.

Stefanski couldn't have imagined doing it amid a global pandemic or nationwide civic unrest.

Growing more comfortable in his new job and finally in his office at team headquarters, Stefanski spoke to reporters Wednesday for the first time since April's draft, when the former Vikings assistant was still living in Minnesota.

That was his home for the past 14 years and it's where he and his wife, Michelle, were raising their young family before moving to Cleveland. It's where the recent death of George Floyd while in the custody of Minneapolis police, a death that sparked mass protests and demands throughout the U.S. for reform, shook Stefanski and moved him to action.

“That state and that city is in my heart, and it was sad,” he said, reflecting on watching the events unfold from afar. “It was heartbreaking. It was frustrating. It was maddening. It was all of those things. My reaction was just like the rest of the country.

First and foremost, Stefanski is making sure the Browns are engaged and informed. He has encouraged daily dialogue with and among his players on racial injustice, and he's urging them to use their platform as athletes to promote change.

“My big message to our guys has been to get in the arena,” he said, adding he plans to create a social justice committee when the team is allowed to assemble. “We are all about action. I think we have some amazing people, both on the team and in this building, that have really provided some great resources to our players so they can become part of the action.”

Stefanski acted upon his own message last week, attending a peaceful protest in Avon, Ohio. He brought his two young sons and mother.

“That was the first time I’ve ever been to one,” Stefanski said. “It was empowering. You saw the passion. You saw the frustration. You saw the love. I think it was just a really enlightening moment for me, and I was able to share that with my boys at a young age."

Stefanski said Commissioner Roger Goodell's acknowledgment the league should have done a better job of listening to its players strengthened his resolve to do his part.

“I am just so keen on dialogue with our players and listening," he said. “My big note to our players is that I have their back, and that is not just lip service. I am standing right there beside them.”

Stefanski cancelled team activities Tuesday to honor Floyd, who was laid to rest in Houston. He's vowed to support the Browns in whatever they decide to do collectively once the season starts. In 2017, more than a dozen Cleveland players knelt during the national anthem in support of quarterback Colin Kaepernick.

He said the topic of a protest has been discussed, but nothing decided.

Although his in-person interactions with players have been delayed for months, Stefanski is making a concerted effort to form a bond with them. And, in a strange way, the unusual circumstances of the past few months have allowed him to connect in a way that he may not have otherwise.

One of the positives to the forced separation caused by the COVID-19 outbreak is that it has allowed Stefanski to get to know his team more intimately. He's kept things loose at times with a Zoom contest, but he's also made sure he's listened to his players while teaching them.

“I am just so sensitive to not just worrying about the Xs and Os right now. It is important," he said. “All the while, we have to come together as a team. The challenge has been to come together while many miles apart. It is a challenge but not something that we can’t do.”