Cole Madison finds his way back to football with Packers 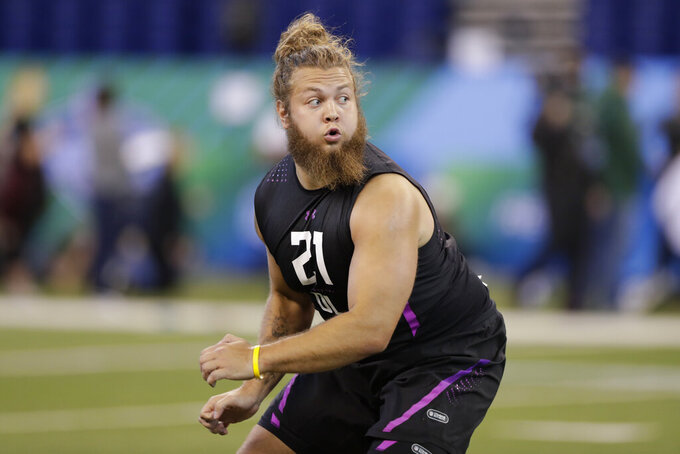 FILE - In this March 2, 2018, file photo, Washington State offensive lineman Cole Madison runs a drill at the NFL football scouting combine in Indianapolis. When the Green Bay Packers used a fifth-round draft pick on Madison last year, there was optimism that the former Washington State standout would be able to fill an opening at right guard. Madison didn’t report for training camp. He put football on hold to focus on his life. After sitting out his entire rookie season, Madison joined the team for the start of offseason workouts in April and was expected to be on the field this weekend for the Packers’ rookie camp. (AP Photo/Michael Conroy, File)

GREEN BAY, Wis. (AP) — When the Green Bay Packers used a fifth-round draft pick on Cole Madison last year, there was optimism that the former Washington State standout would be able to fill an opening at right guard.

Madison didn't report for training camp. He put football on hold to focus on his life.

"I love football, but, at that point, it was my health and my life was on the line," Madison said. "I had to go help myself before my football career. If I didn't get my chickens in order back then, I don't think I'd be here right now."

After sitting out his entire rookie season, Madison joined the team for the start of offseason workouts in April and was expected to be on the field this weekend for the Packers' rookie camp.

Madison would not detail exactly what had gone wrong, only saying that his issues had deep roots and were exacerbated by the suicide of Washington State quarterback Tyler Hilinski in January 2018.

"I was going through some stuff for a long time that I was putting off and they caught up to me with the decisions off the field I was doing. I wasn't making good decisions and it led to bad thoughts," Madison said. "Tyler, if anything, helped me with knowing that other people go through things, too. It was a little light at the end of the tunnel — light in a dark area.

"It was a first beginning step of a wakeup call for me, how I needed to handle my mental health, was after that entire situation. Me and him were great friends. I would have never known any of that was going on or vice versa. I had my demons going on and no one had any idea what was going on. It's just one of those things of taking that step when you've got those things and not to just bat them down and talk to someone and opening up."

Through those conversations, things improved. By November or December, he said, he began to feel like his old self.

"After that, it was getting over the hump, that period of, 'I feel like me again," Madison said. "I haven't felt like me in God knows how long and I finally started to feel positive, feel like, 'Hey, I can do this' and no second-guessing myself."

With that, Madison began to think about football again; he didn't even watch football last year. He began to focus on getting ready physically. He's listed at the same 6-foot-5 and 308 pounds as he was at the scouting combine in 2018. He called his stamina "great."

"I'm ready to roll," Madison said. "Took a year off, twiddling my thumbs, now I'm back and letting it loose."

The Packers are eager to see if Madison can reach his potential. There remains a hole at right guard, though they fortified the offensive line with free agent Billy Turner and second-round draft pick Elgton Jenkins.

"It was great to see Cole back in the building and doing some football things again," general manager Brian Gutekunst said. "That was a really, really pleasant surprise. I think he was very appreciative about the way we handled things last year. We're excited to see what he can do for us because he had a really good offseason last year before everything transpired. Very optimistic."

New coach Matt LaFleur is implementing an outside-zone running scheme that is fueled by linemen with a blend of athleticism and power. Gutekunst called Madison an "absolute fit" for what LaFleur is trying to build.

"We were really high on Cole when he was coming out," LaFleur said, thinking back to 2018 when he was offensive coordinator of the Tennessee Titans. "So, we feel like he adds a lot of value to what we can do with him in our system."

Madison's return will be a day-by-day process. He hasn't put on pads or blocked somebody since the Senior Bowl in January 2018.

His football comeback, however, is secondary to his personal comeback.

"I can't remember the last time I'd wake up and feel positive and not go into bed with negative thoughts in my head," Madison said. "Just living life and being happy doing it, it's a blessing."