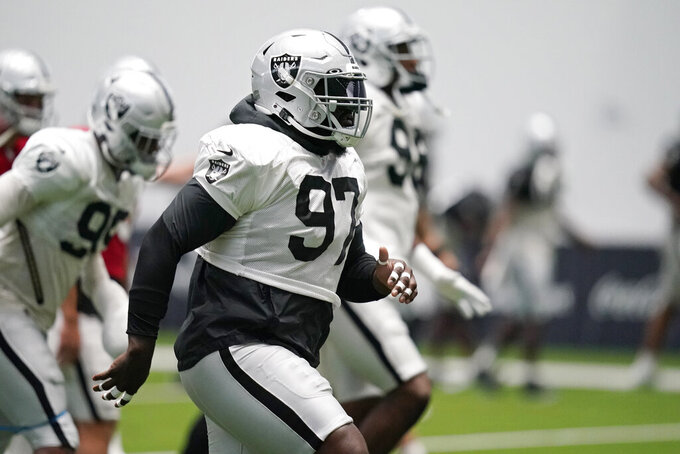 HENDERSON, Nev. (AP) — Las Vegas coach Jon Gruden has insisted since the start of training camp that offseason acquisition Maliek Collins will be at the heart of the Raiders' defense.

Collins, who spent the first four years of his career with the Dallas Cowboys, said Thursday he’s prepared to accept that responsibility.

“I’m really excited for this next step ... I’m ready for it,” said Collins, who signed a one-year contract worth $6 million. “You just bet on yourself. I’ve always been a person that, I got full confidence in me. I know what I’m capable of. When I talked to Gruden, when I first planned on coming here, he told me to just come in and just be myself. That’s what I’ve been trying to do to the best of my ability, do things that I normally do. I’m not a big speech guy, I’m not a big hoorah guy. Kind of just lead by example and do things the right way.”

Statistically, the 25-year-old hasn’t necessarily had as big a year as his rookie season, when he established career highs with 17 solo tackles, five sacks and 13 quarterback hits.

Overall, Collins has 14.5 sacks and 54 solo tackles in 61 career games. He had 15 solo tackles, four sacks and 10 quarterback hits in 16 games last season for the Cowboys.

Raiders defensive line coach Rod Marinelli said “it’s not about numbers, it’s about how you impact the game.”

And if there is one person who knows about Collins’ worth to a defense, it’s Marinelli, who also came over from Dallas and spent the past four seasons helping mold the 6-foot-2, 303-pound defensive tackle.

Collins said having Marinelli in camp has helped him ease into defensive coordinator Paul Guenther’s system.

“I’m thankful to be back with him again,” Collins said. “He’s demanding, and I say that in a good way. He wants you to be the same guy every day, that’s the main thing. He wants us to be consistent as players, just as he is coaching.”

Collins said he spent the offseason focusing on his diet and cutting roughly 20 pounds of body fat after suiting up at around 325 pounds last year. He appeared to be at the top of his game one day before the team was scheduled to scrimmage inside Allegiant Stadium for the first time.

Gruden and Guenther are hoping Collins’ influence will help bring discipline to a unit that had the third-most penalties (128) and penalty yards (1,138) last season, and that ranked dead last in net penalties (-37) and net yards (-375). The Raiders also ranked in the bottom half of the league in turnover differential (-2), another area Collins’ presence can benefit the defense.

“I think we have a chance to be much, much better,” Gruden said. “I really think the key to our defense is eliminating penalties, creating more turnovers and I think Maliek Collins is a name that we got to circle and look at every single day. I think that three-technique in this defense has to raise hell and he’s got to do it for us.”

Guenther likened Collins to eight-time Pro Bowl tackle Geno Atkins of the Cincinnati Bengals, calling the fifth-year pro potentially the Raiders’ best offseason acquisition, someone who will be expected to shore up a defense that allowed the eighth-most passing yards last season.

“He’s been tremendous with the younger players, teaching them techniques,” Guenther said. “I always tell the players, knowledge is power. Whether you’re in football or business, if you know what you’re talking about people are going to gravitate to you, and that’s what he possesses. They want to pick his brain and he’s willing to give it back to them. That’s the kind of guy you want on this team.”