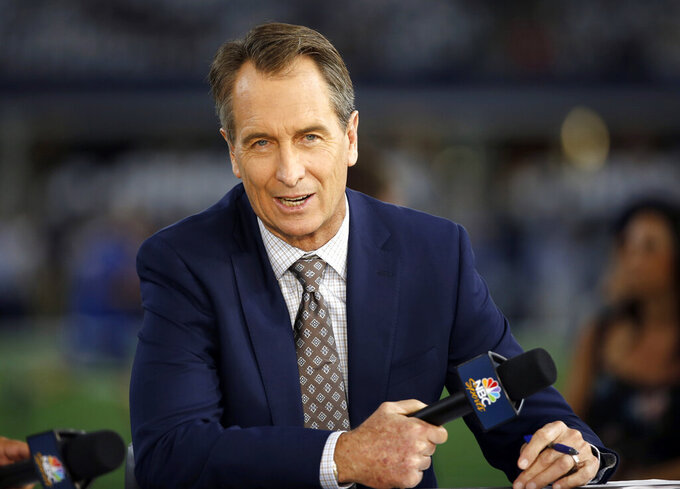 FILE - In this Oct. 30, 2016, file photo, NBC Sunday Night Football cast member Cris Collinsworth sits on the set during pregame of an NFL football game between the Philadelphia Eagles and the Dallas Cowboys in Arlington, Texas. Collinsworth will call his first Sunday Night game in Cleveland when the Browns take on the Los Angeles Rams. Cleveland holds a special place in Collinsworth's heart because it was where he called his first NFL game in 1990. (AP Photo/Ron Jenkins, File)

Cris Collinsworth will get to experience a rarity this week. He gets to call a Browns game when NBC's "Sunday Night Football" travels to Cleveland for the first time since 2008.

When he was starting out as an analyst, it seemed like Browns games were all that Collinsworth was doing.

Before Collinsworth became a 16-time Sports Emmy winner and built a reputation as one of the top analysts in any sport, he was a struggling broadcaster working his way up the depth chart at NBC.

"Whatever the worst game was, I was on it and thank goodness I was," Collinsworth said, recalling his early days with NBC. "The idea I am still doing games after all my early screw-ups is amazing."

During Collinsworth's first four seasons with NBC, 15 of his first 38 games involved the Browns. He has since had them only three times since 1995.

Collinsworth retired in 1989 after an eight-year playing career with the Cincinnati Bengals. He quickly transitioned into media, hosting a sports talk radio show in Cincinnati along with reporting for HBO's "Inside the NFL" while attending law school.

In 1990, he became one of the co-hosts of "Inside the NFL" and was hired by NBC for four games. Collinsworth was paired with Jim Donovan, the longtime sports director at Cleveland's NBC affiliate.

The first game they did was in Buffalo when the Bills hosted the Colts. To say Collinsworth came in blind might be an understatement.

"I had no idea what I was doing. It's not like they give you a class," he said. "David Michaels was my producer. I had two manila folders with the names of the offense and defense on them. That was the extent of my getting ready for the game."

Michaels called Terry Bradshaw, who was working for CBS at the time. Bradshaw sent the boards he used to prepare for games, which helped give Collinsworth an example of how to do pregame preparations.

Collinsworth has long appreciated Donovan for his patience that first year and still refers to him as "my original dance partner."

"He would help me with notes and things to say," Collinsworth said. "He knew all the players and I was hollering and making stuff up."

NBC was also adjusting to its new analyst, especially when it came to the spelling of his last name. A graphic before a game at Cleveland in 1990 read "Cris Collingsworth."

Donovan, who has been the Browns' radio voice since 1999, said what he appreciated about Collinsworth was that he wasn't afraid to give his opinion.

"He spoke his mind and didn't have any fear," he said. "A lot of guys would come from the field to the booth and would be very guarded and not critical of a player or coach. He called the game the way he saw it, which was refreshing."

Collinsworth also wasn't afraid to speak his mind when it came to asking for a raise from NBC. He said he remembered a couple of the airline tickets to get to games cost more than what he made for the game, and he tried to get the network to double his salary.

NBC not only didn't give a Collinsworth a raise, it didn't use him for any games in 1991. NBC Sports President Dick Ebersol brought him back in 1992 for NFL games and Notre Dame home games.

He said one of Collinsworth's strengths is that he immersed himself in how a broadcast works from the ground up.

"Cris has never been in the ex-jock business, he has been in the broadcast business," Michaels said. "He knows what everyone on the crew does and wanted to discover the inner workings. He sees the game perfectly. He can look at four different things going on during a play and be able to break it down."

Collinsworth acknowledges it took him a couple of seasons to find his stride as an analyst, but he said Donovan deserves credit for helping him. The two are likely to get together before the Rams-Browns game Sunday.

"He was great in setting me up and what to say. Everyone has great memories of their first dance partner," Collinsworth said.