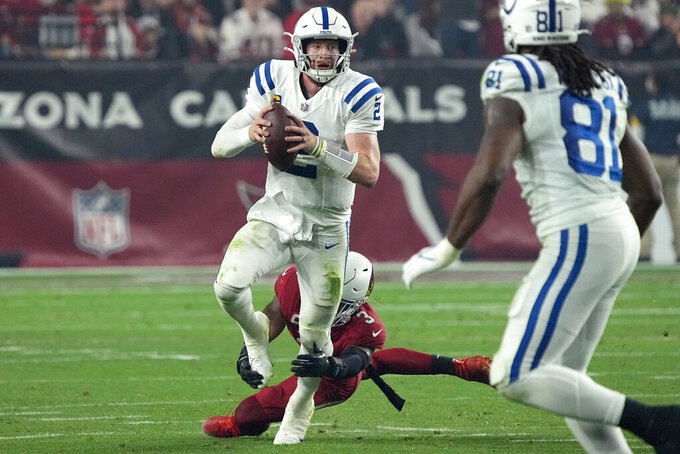 The Indianapolis Colts activated quarterback Carson Wentz from the reserve/COVID-19 list Saturday and he should be able to start against Las Vegas on Sunday.

Wentz, who is unvaccinated, must have a negative test Sunday to be allowed to play under new protocols adopted by the NFL and the players' union this week. He went on the COVID-19 list Tuesday and was required to isolate for five days.

The Colts (9-6) can clinch a playoff berth by winning. They also activated cornerback T.J. Carrie and tackle Braden Smith from the COVID-19 list, while promoting quarterback Brett Hundley and defensive tackle Chris Williams from the practice squad as coronavirus replacements.

Tampa Bay (11-4) said Saturday that Bruce Arians will coach in the game at the New York Jets. Arians had gone into COVID-19 protocols earlier in the week.

Wide receivers coach Kevin Garver also will work the game after coming off the list. Activated to play were cornerbacks Jamel Dean and Sean Murphy-Bunting.

—Green Bay (12-3) activated punter Corey Bojorquez, guard Ben Braden, linebackers Ty Summers and Oren Burks, tight ends Tyler Davis and Marcedes Lewis off the COVID-19 list, though and Summers reverts to injured reserve. The Packers, who are closing in on the NFC's top overall seed and only playoff bye, also restored defensive lineman RJ McIntosh to the practice squad from the list, and elevated DL Abdullah Anderson to the active roster as a COVID-19 replacement.

The Chargers have dropped two straight and need a win against Denver to keep their postseason hopes alive.

—Cincinnati returned QB Brandon Allen and linebacker Germaine Pratt to the active roster from the COVID-19 list. Receiver Trent Taylor is a COVID-19 replacement. Going on the list was tight end Scotty Washington of the practice squad.

The Bengals (9-6) host Kansas City and can clinch the AFC North title with a victory.

—Miami (8-7) listed as questionable for its game at Tennessee DL Adam Butler and S Brandon Jones, who were on the COVID-19 list. They were traveling separate from the team.