Colts could still be in quarterback market on draft weekend 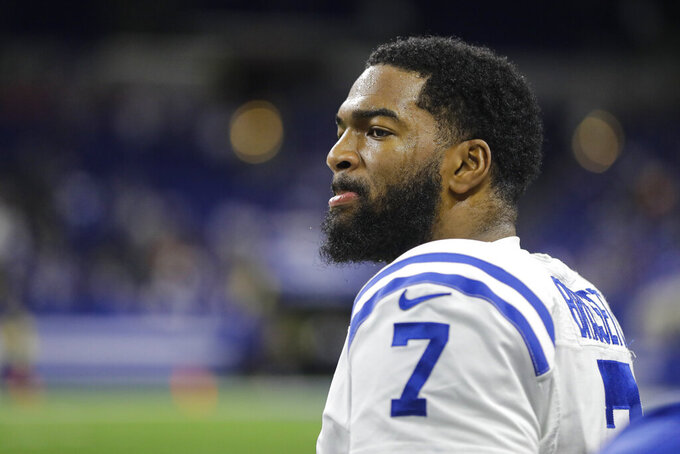 FILE - In this Dec. 1, 2019, file photo, Indianapolis Colts quarterback Jacoby Brissett (7) is shown on the sideline during the second half of an NFL football game against the Tennessee Titans in Indianapolis. Brissett's role has changed. Indianapolis Colts coach Frank Reich doesn't believe anything else will with his now backup quarterback. Brissett lost the starting job two weeks ago when the Colts agreed to sign free agent Philip Rivers to a one-year contract. (AP Photo/Darron Cummings, File)

INDIANAPOLIS (AP) — Philip Rivers, Jacoby Brissett and Chad Kelly all have one year left on their contracts.

Brian Hoyer, who was released last month, and Andrew Luck, who retired in August, still count against the Indianapolis salary cap this year.

And yet, despite being charged $56.5 million for five quarterbacks, the Colts may be looking for yet another one in next week's NFL draft.

“You know how we feel about this. We are always looking hard at the quarterbacks," coach Frank Reich said recently. “You identify one, two, three guys who you like, you think fit. There’s no guarantee you'll get them because there are 31 other teams who can get them."

They may not have a choice.

After Luck's sudden retirement, Brissett took over as the starter for the second time in three years and struggled after injuring his left knee. The result: Indy finished 7-9 and missed the playoffs for the fourth time in five years.

So suddenly the Colts are staring at a 2021 roster that doesn't include a single quarterback — and without a first-round pick next week to land one.

Ballard and Reich haven't dropped any hints about what they intend to do with two second-round picks, Nos. 34 and 44 overall. Or whether they might consider moving back into the first-round — for the right price and right guy.

What they will do is study, game plan and likely land a quarterback with one of their seven picks.

“I think it is a good group and it has good depth at all levels," Ballard said during the league's annual scouting combine in February. “We all know that position usually gets pushed up, but I’ve talked about this before, you’ve got to be true to your evaluation. I think more mistakes are made when you push that position up."

If the Colts don't take a quarterback in the first two rounds, it may be because they're trying to improve the receiving corps.

Yes, Reich and Ballard still like T.Y. Hilton and Jack Doyle. Yes, they appreciate Zach Pascal's steady progression. And, yes, they expect Parris Campbell and Daurice Fountain to come back strong after injuries.

But the departures of tight end Eric Ebron and receiver Devin Funchess in free agency leave some holes. Plus, Hilton has struggled with injuries each of the past two seasons, turns 32 in August, and like the three quarterbacks is entering the final year of his contract.

Ballard prefers building through the draft but already has made some splashy moves this offseason.

In addition to signing Rivers, an eight-time Pro Bowler, he acquired star defensive tackle DeForest Buckner from the 49ers for the 13th overall selection next week and quickly signed Buckner to a lucrative contract extension. Then he added defensive tackle Sheldon Day, an Indy native who played with Buckner in San Francisco, and cornerbacks Xavier Rhodes and T.J. Carrie.

What do those moves mean for the draft?

Ballard now has the ability to go as heavy on offense as he did last year the other way, when he used seven of 10 picks on defensive players.

Reich made no secret of his desire to stick with the ground game last season. Apparently that's not changing.

Last weekend, the Colts made another uncharacteristic move by signing free agent fullback Roosevelt Nix. Indy, like many teams, had opted not to carry a fullback on the roster. But now, it seems, the Colts have a plan for Nix.

“We’ve got a couple things going, a couple things we can work, train and practice at," he said Monday. “We are going to keep it all under wraps right now, but for the most part just doing my job. Whatever they call upon me to do I will give it my best bet and we will see what happens.”

Perhaps the biggest lingering question for the Colts is whether they will re-sign placekicker Adam Vinatieri, the NFL's career scoring leader.

Vinatieri, a free agent, has been recovering from season-ending surgery on his plant leg and has not yet signed with any team.