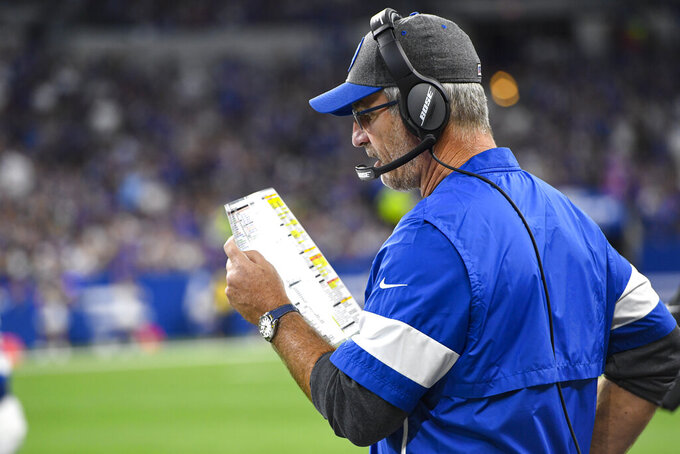 Indianapolis Colts head coach Frank Reich calls a play during the first half of an NFL football game against the Oakland Raiders in Indianapolis, Sunday, Sept. 29, 2019. (AP Photo/Doug McSchooler)

He expects to see a different response from his team this weekend.

One day after the Colts lost at home for the first time in 12 months, Reich again acknowledged the run defense must improve and said everyone needs to be a part of the solution before Indy heads to Kansas City.

"It's all about gap control and so you've just got to be disciplined and play your assignments and technique right," Reich said on a conference call Monday. "It's one guy here, one guy there, it's a collective hole. But it's a team game and we have to tighten up and I'm confident we will."

Indy seemed primed to make another big defensive jump this season after moving from No. 30 overall in 2017 to No. 11 in Matt Eberflus' first season as defensive coordinator.

The Colts added free agent defensive end Justin Houston to help the pass rush, used seven of their 10 draft picks on defensive players and convinced themselves that a second season in the system would help, too.

Instead, four games into the season, Indy (2-2) ranks near the bottom of the league against the run and in the bottom fourth for points allowed. And the problems that caused so much consternation in the second half of a Week 3 win over Atlanta reappeared against the Raiders.

Part of the explanation could be injuries.

All-Pro linebacker Darius Leonard, last season's league champ in tackles, missed both games with a concussion. Starting defensive end Jabaal Sheard made his season debut Sunday after spending the last two months recovering from a knee injury. Starting safety Malik Hooker is expected to miss at least three more weeks with a torn meniscus and Indy's top cornerback, Pierre Desir, has been battling injuries since getting hurt at Tennessee in Week 2.

Indy got more bad news Sunday night when the other starting safety, Clayton Geathers, went into the concussion protocol.

But Reich isn't looking for excuses.

He needs to slow down reigning MVP Patrick Mahomes and the high-scoring Chiefs (4-0) — or risk having a repeat performance from last season's 31-13 playoff loss. And Reich believes he can.

"I've always felt — last year and going into this year — that teams can't run the ball on (our defense)," Reich said Sunday. "We don't let teams run the ball. We've got to look at that and see what we can do better as coaches and players to have a better run defense."

Pass protection. After allowing five sacks in the first two games, the Colts have reverted to last season's form by allowing only one sack the past two weeks. In fact, Jacoby Brissett took only three hits Sunday.

Running game. If the defensive performance was the biggest disappointment Sunday, Indy's ground game was a close second. The Colts rushed 23 times for 81 yards.

LB Anthony Walker. With Leonard out, the Colts moved their defensive signal-caller from middle linebacker into Leonard's spot on the weak side. The result: Walker has 21 tackles in those two games and against Oakland logged his first sack in 12 months.

Eric Ebron. The veteran tight end seemed to erase his reputation for dropping passes with a Pro Bowl season in 2018. His old problem returned Sunday when he caught one pass for a 48-yard TD but dropped the other four passes thrown his way.

Geathers was diagnosed with concussion-like symptoms following the game — the same thing that happened to Leonard after a Week 2 victory at Tennessee. RB Marlon Mack left the game late in the third quarter with an injured ankle, did not return and will be monitored closely this week, Reich said. Indy also will watch rookie receiver Parris Campbell closely this week after he suffered an abdominal injury against the Raiders. Campbell returned later in the game.

Reich and the Colts plan to spend this week cleaning up the uncharacteristic miscues that plagued them against Oakland.