Colts' early end serves as motivation for better run in 2021 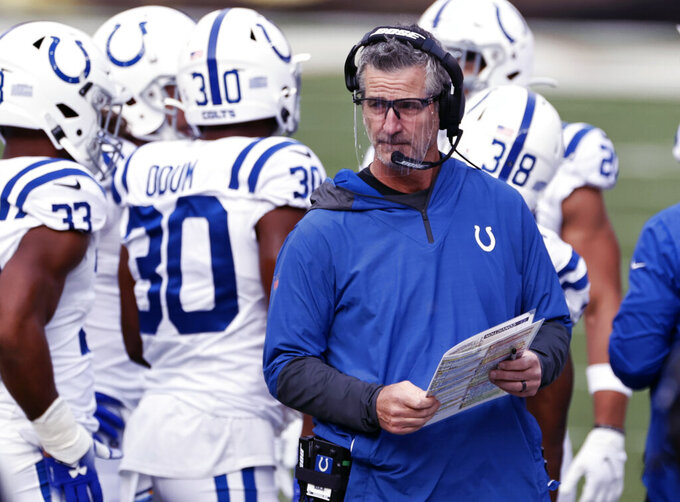 FILE - Indianapolis Colts head coach Frank Reich stands on the sideline during the first half of an NFL football game against the Cleveland Browns in Cleveland, in this Sunday, Oct. 11, 2020, file photo. Reich, a former quarterback for the Buffalo Bills, returns to Orchard Park, N.Y. for an NFL wild-card football game against the Bills on Saturday, Jan. 9, 2021.(AP Photo/Ron Schwane, File)

Instead, they started pondering their futures.

After winning 11 games and sneaking into the playoffs for the second time since 2015, the Colts took no solace from pushing second-seeded Buffalo to the brink in Saturday's 27-24 wild-card loss.

“For me it was Super Bowl or bust, so it was a bust," All Pro defensive tackle DeForest Buckner said. “We need to go into the offseason and work on our craft. You’ve got to think of those moments where we let it just sleep between our fingers."

Where did it go wrong?

On offense, the Colts (11-6) consistently struggled on third downs and settled for field goals in the red zone. Defensively, Indy had trouble stringing together four quarters of good play — especially late in the season.

The combination forced Indy to hit the road for the playoffs. And while the defense played better against the Bills and the offense converted 53% of its third-down chances, the red-zone bugaboo sunk Indy's title hopes.

Yes, the Colts scored two TDs inside the Bills 20. They also settled for a 30-yard field goal, turned over the ball on downs at the Buffalo 4, and missed a 33-yard field goal. Indy knows that must change next season.

“You look right there, that’s the difference in the game," quarterback Philip Rivers said after perhaps playing the final game of his 17-year NFL career. “We played good. We didn’t play well enough."

Rivers' future will be one of many tough decisions the Colts face before April's draft.

If Reich had his way, he'd bring back everyone for another run at a championship. But Reich knows changes are coming, and Indy must improve to reach the top.

Many thought Rivers would walk away last season. Instead, the 38-year-old QB signed a one-year deal with the Colts and played his best ball over the final 12 games of the season.

Reich made it clear Saturday and Sunday he wants Rivers back.

Two big questions remain, though. First, Reich must meet with general manager Chris Ballard, and, of course, Rivers must choose to come back.

“Whatever God’s will is for me and my family – if it’s here, in Indy playing another year then we’ll be here," Rivers said during a sometimes emotional postgame news conference. “If it’s not, I’ll be on the sideline with a ball cap coaching the heck out of a high school football team down in south Alabama."

Even if Rivers returns, the Colts could be in the market for a quarterback. Former starter Jacoby Brissett, who backed up Rivers, will likely leave in free agency. That leaves rookie Jacob Eason, a fourth-round draft pick who took no snaps this season, as the only quarterback under contract for 2021.

There has been speculation Eagles quarterback Carson Wentz could be traded to Indy. Wentz had his most productive seasons with Reich as his offensive coordinator.

Reich hasn't discussed such a possibility, but it could make sense. Rivers and Brissett had a combined cap hit of nearly $46.4 million in 2020. So with or without Rivers, the Colts must start planning for the future.

“You have to have an answer for next year," Reich said. “But like you said, because of Philip’s age, that certainly has to be in the perspective and the discussion.”

The Colts have two All-Pros — linebacker Darius Leonard and left guard Quenton Nelson — nearing the end of their rookie deals. Leonard could hit free agency after 2021. Indy still has a fifth-year option on Nelson.

The 32-year-old Castonzo considered retiring last offseason before signing a two-year deal to stay in Indy. But he missed four games this season with rib, knee and ankle injuries before having season-ending ankle surgery on Dec. 31. If Castonzo chooses not to play, his replacement could already be on the roster.

“I think discussing Quenton as an option is certainly realistic," Reich said. “Chris and I have already had that conversation when A.C. got hurt."