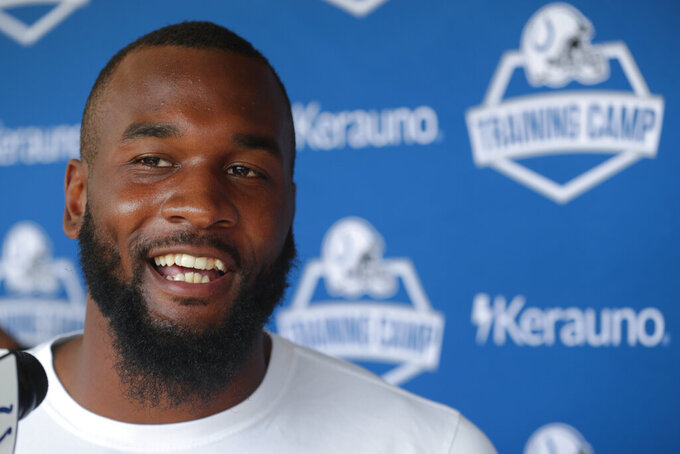 Unlike the past two summers, nobody at training camp seems terribly worried.

General manager Chris Ballard said Wednesday the Colts will limit the work of Luck and a handful of his teammates as a precaution when practice begins Thursday.

"He didn't do anything this spring and we don't want him to have a setback," Ballard said after the Colts reported to their complex in Westfield, a northwestern suburb of Indianapolis. "We're just making sure we're taking all the right steps with him and with all of these guys."

The other players on that list include tight ends Jack Doyle and Ross Travis, starting safety Clayton Geathers, and receiver Deon Cain, all coming back from injuries. Second-year receiver Daurice Fountain could miss a few days, too, after rolling an ankle during a private workout. Running back Spencer Ware has been placed on the physically unable to perform list with an undisclosed muscle injury.

Previously, Ballard said second-year coach Frank Reich also would give extra days off to older veterans such as longtime left tackle Anthony Castonzo and defensive end Justin Houston, a free agent signee. And the Colts intend to be especially cautious with players during the first week of camp when Ballard said data show most injuries occur.

Outsiders don't appear to be worried. With expectations of the Colts making a deep playoff run soaring, players are downplaying the talk and focusing on what they need to get done over the next three weeks at Grand Park Sports Campus.

"We always talk about blocking out the noise," All-Pro linebacker Darius Leonard said. "I just have a laser focus so I'm coming in with the same mentality as last year."

There is good reason for hope.

After missing the entire 2017 season following surgery on his throwing shoulder, Luck returned last year and led the Colts to their first playoff appearance in four years. He delivered with perhaps, the best season of his seven-year career and ran away with the NFL's Comeback Player of the Year award.

Many believe he'll be even better in his second season in coach Frank Reich's offense and playing behind a young offensive line that brings back all five starters from a unit that allowed a league-low 18 sacks in 2018.

"Andrew has really been able to have even more input into the system this year in the meetings and putting his imprint on what we are doing now, knowing what he likes, what he doesn't like, and why he likes what he likes within our system," Reich said during the team's three-day minicamp in June. "I think it has taken the meetings to a higher level."

Luck and Reich did not speak Wednesday, though Luck is expected to return to the field Thursday.

But older Colts have been seen all this play out before.

Following an AFC championship game loss in January 2015, many prognosticators tabbed the Colts as a Super Bowl favorite heading into the 2015 season. Instead, Luck missed nine games with myriad injuries and finished the season on injured reserve as the Colts stumbled to an 8-8 record and failed to make the playoffs.

Luck & Co. have not forgotten what went wrong and may be wary of buying into the hype again. Ballard embraces the chatter.

"Expectations are a good thing, not a bad thing. That's a good thing," he said. "But every year is a new year, it just is. We don't want to be a momentum team, we want to continue to work and get better."