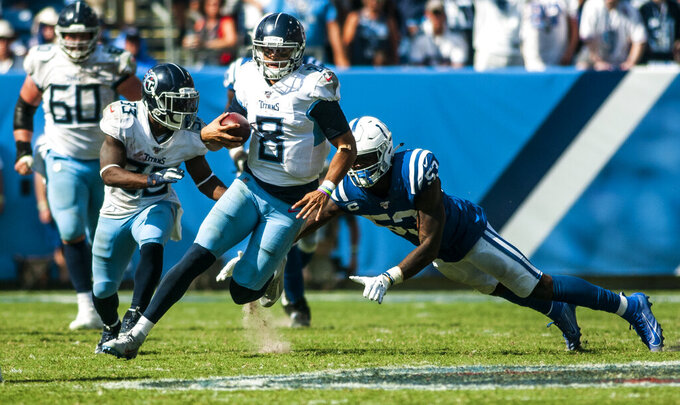 It helps Moore recognize what he and his teammates must do to keep Ryan and his receivers under control Sunday.

"They're very talented, very crafty receivers," Moore said. "Everybody knows what Julio brings to the table. We just have to be on point."

For Moore and most of Indy's young defense, game tapes are all they have. Only six players have ever faced Ryan up close and personal, and safety Clayton Geathers is the only one in the Colts' back seven to experience it.

Moore recognizes it may take a few series to adapt to the Falcons' potentially high-scoring offense at game speed.

But that's only one potential problem for the Colts (1-1). They could be short-handed, too.

If the defense can't slow down Falcons receivers, there could be other options.

Indy could rely on its suddenly strong ground game to control the clock. The Colts could use a vastly improved pass rush to make Ryan uncomfortable as they did the last two weeks with Phillip Rivers and Marcus Mariota. Or, perhaps they'll take advantage of the Falcons' biggest early season bugaboo: turnovers.

After throwing seven interceptions all of last season, Ryan already has five this year, including two in the red zone.

"It's not the start you want, but it's like that sometimes," said Ryan, now in his 11th season. "You've just got to weather the storm and keep making good decisions and be aggressive."

And keep finding Jones and Ridley, Sanu and Hooper.

"It's going to be a big test," Colts cornerback Quincy Wilson said. "We just have to make sure we're staying on our details, making sure our techniques are on point and don't walk past any mistakes."

With Andrew Luck and Peyton Manning both retired, the Colts have taken advantage of a run-first philosophy that's reflected in fashionably impressive numbers.

Indy and Minnesota are tied for second this season in yards rushing, Marlon Mack ranks No. 3 among all runners and Indy's 370 yards are the franchise's highest for two games to start a season since 1971. Equally strange is the fact Indy ranks No. 32 in passing offense.

Nobody minds. All-Pro guard Quenton Nelson keeps a hat with the phrase "Run The Damn Ball" in his locker and quarterback Jacoby Brisset t appreciates the impact the running game has had.

"Our guys up front sense that and they like when that happens," Brissett said when asked about seeing defenses wearing down. "They ask for more runs, so they get more runs."

The Falcons, in contrast, are 28th in rushing at 65 yards per game. Devonta Freeman has only 41 yards with no run longer than 9. Freeman looked quick early in last week's win over the Eagles when he had three carries for 18 yards in Atlanta's first five plays. But after he was tackled for losses twice, Atlanta changed course.

Injuries, which derailed Freeman last season, don't seem to be the problem, either.

"He showed the speed, the burst, the finish," coach Bob Quinn said. "He looked stronger in a lot of ways."

Indy returns to Lucas Oil Stadium for the first time since Aug. 24, when fans booed as Andrew Luck left the field before announcing his retirement.

Players acknowledge it will seem strange without Luck on the sideline or field.

The Falcons may make a late decision on the status of punter Matt Bosher, who strained his groin in warmups before last week's game. Atlanta signed Matt Wile to the practice squad as a possible backup on punts and kickoffs.

Matt Bryant handled kickoffs last week. Wile was with Minnesota in 2018 and Atlanta briefly in 2016.