Colts may use draft on offense after beefing up defense 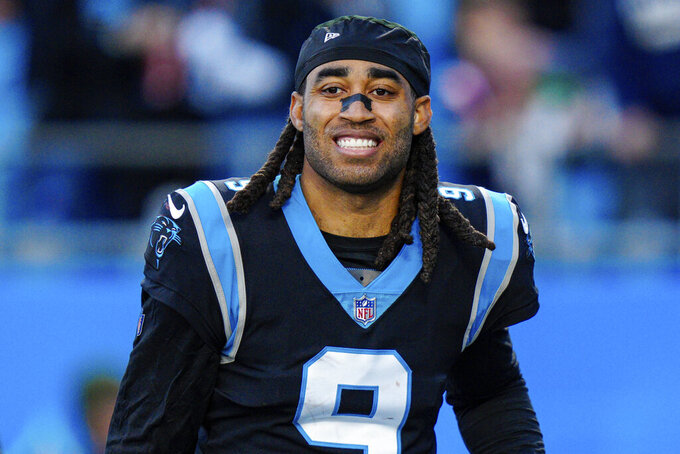 FILE - Carolina Panthers cornerback Stephon Gilmore walks off the field after an NFL football game against the New England Patriots, Sunday, Nov. 7, 2021, in Charlotte, N.C. The Indianapolis Colts have solidified their secondary by signing five-time Pro Bowl cornerback Stephon Gilmore to a two-year contract, a person with knowledge of the deal told The Associated Press on Friday, April 15, 2022. (AP Photo/Jacob Kupferman, File)

Defensive coordinator Gus Bradley continued the installation of his new scheme. Cornerback Stephon Gilmore, the 2019 NFL Defensive Player of the Year and five-time Pro Bowler, told reporters why he signed with Indy. And Reich began the annual ritual of meeting with a new quarterback, this time 2016 league MVP Matt Ryan.

But it's only the start — of the season and the changes that will be coming.

Reich knows more new faces will arrive after next weekend's draft and because general manager Chris Ballard already has invested so heavily on defense, most of the additions will likely be on offense.

“I think it’s a really good draft and I think we’re going to get better when the draft is over,” Reich said. “I think we’ll be better. It’s an exciting time of year and I look forward to how it’s going to work out.”

What exactly the Colts plan to do depends largely on what happens while they wait for Day 2 to begin.

Ballard traded Indy's first-round pick to Philadelphia in last year's deal for Carson Wentz and isn't scheduled to make a Day 1 selection for the third time in four years. The first of Indy's seven selections comes at No. 42 overall.

The good news is this rookie class appears especially deep for offensive linemen and receivers, two positions the Colts need.

Still, Ballard has repeatedly insisted he won’t reach for lesser value just to fill a need — which is why he didn’t draft a left tackle last April and it's unclear who would be the favorite to start opening day.

“That's the age-old question, do you draft for need or for value?" Ballard said Friday. “You just have to make sure you’re not passing on a great player. If it’s even then we’ll take the need. But I think you've always got to have enough faith and confidence when you lay your head on the pillow that we’re going to find answers between now and the start of the season.”

Indy appears better suited to fill the hole left by right guard Mark Glowinski, who signed with the New York Giants in free agency. Veterans Danny Pinter and Matt Pryor will likely battle for that job.

Whatever happens, though, Reich will have a plan to get the rookies acclimated to the new expectations, new environment and new teammates.

“I think we’ve got a solid core of guys with myself, Quenton (Nelson) and Braden (Smith) who know what the standard is we set for ourselves,” starting center Ryan Kelly said. “I know Danny’s excited to get in there."

If Ballard doesn't find the right offensive lineman, he could be looking for receivers.

Another option could be tight end, where the Colts need to replace two-time Pro Bowler Jack Doyle who retired.

The offseason moves have created a different look for Indy's defense.

By adding Yannick Ngakoue, getting back injured defensive tackle Tyquan Lewis and the emergence of last year's top two draft picks, Kwity Paye and Dayo Odeyinbgo, Indy could have its best pass-rushing rotation in years. Gilmore and safety Rodney McLeod should provide an upgrade in the secondary.

But don't be surprised if Ballard adds another defender — if there's a game-changing cornerback or playmaking linebacker still on the board.

Ballard had a propensity for wheeling and dealing even before making this year's two big moves. He sent a first-round pick to San Francisco for two-time Pro Bowl defensive tackle DeForest Buckner in 2020. But Ballard's draft weekend deals have been an annual tradition.

Expect Ballard to be working the phones to acquire more bodies or more picks or both.