Colts not expecting many offensive changes with new QBs 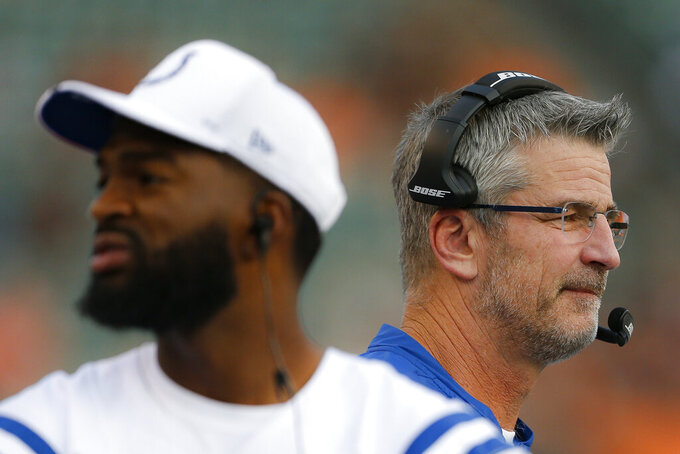 He studied it relentlessly last season. He expanded his knowledge by taking advantage of extra snaps this past offseason.

Now he's ready to show everyone how efficiently he can run the offense in Sunday's season opener at the Los Angeles Chargers — with the Colts coaches imposing no limitations and making no major changes to the playbook.

"Anybody who is playing quarterback for you is going to have their favorite (plays)," offensive coordinator Nick Sirianni said Tuesday.

"Andrew (Luck) had his favorites, Jacoby has his favorites. So we stay within the scheme and we do what fits our players the best. If Jacoby likes something that Andrew didn't, you might see a little bit more of that and vice versa."

But Sirianni is comfortable enough to give Brissett the same latitude Luck had on run-pass options or calling audiles.

Yet general manager Chris Ballard and coach Frank Reich continued to insist Brissett would be a competent, capable replacement if Luck needed more time to recover from his injury.

Suddenly, Indy's three remaining quarterbacks — Brissett, Chad Kelly and Phillip Walker — found themselves under a white-hot spotlight. With Brissett elevated to be the starter, Kelly suspended for the first two games and Walker waiting to make his NFL debut, Ballard needed to find a backup.

He filled that void Monday by signing Brian Hoyer, Tom Brady's longtime backup, to a three-year deal and on Tuesday the Colts announced Brissett had signed a new two-year contract worth $30 million — a deal Brissett negotiated without an agent.

"I did it with my rookie contract, too, so I kind of had the gist of it," Brissett said. "But when you're honest — that's all you can be is honest."

Luck's retirement has relegated the Colts from trendy AFC South favorite and possible Super Bowl contender to longshot. And after finishing last season ranked No. 8 in The Associated Press Pro32 power rankings, the Colts fell to No. 20 on Tuesday's first ballot.

Local fans worry this could be a repeat of 2017 when Brissett was pressed into service because of Luck's injured shoulder and Scott Tolzien's ineffectiveness. Brissett was sacked a league-high 52 times and went 4-11 after relieving Tolzien in the opener, just eight days after being acquired in a trade from the Patriots. It's the last time Indy played in Los Angeles.

"No question, I think it made me a better player you know being able to learn a lot of things on the fly," Brissett said. "Going back and really studying myself and studying football and just understanding offenses attacking defenses was a tremendous asset for me."

The Colts believe this year will be different because Brissett has a stronger supporting cast and they've seen Brissett emerge as a more accurate, polished quarterback. He makes quicker reads, quicker throws and has become a favorite in the locker room.

Ballard thinks so highly of Brissett that he's turned down trade offers for him, and Reich, the longtime backup to Hall of Famer Jim Kelly in Buffalo, has continued encouraging Brissett to be prepared for his next starting chance.

"Since Andrew did not take any reps this whole offseason, I just for fun had the guys the other day say, 'Hey, how many reps has Jacoby gotten this offseason with the first team?' It was about 1,200 reps. That's more than a season's worth of plays," Reich said last week. "You can just feel his presence in the huddle on the field, the confidence that he has had and the chemistry with the receivers."

And that didn't come as a surprise.

Brissett spent the entire 2017 offseason, part of training camp and most of the preseason also working with Indy's starters because the Colts put Luck on a limited workout routine.

And now the Colts think their three-year investment in Brissett will pay big dividends in the same basic offense Luck ran.

"Nothing changes and that's the way our room works," Brissett said. "Frank and Nick hold everybody in that room to the same standard they would if it was last year and Andrew was the starter."