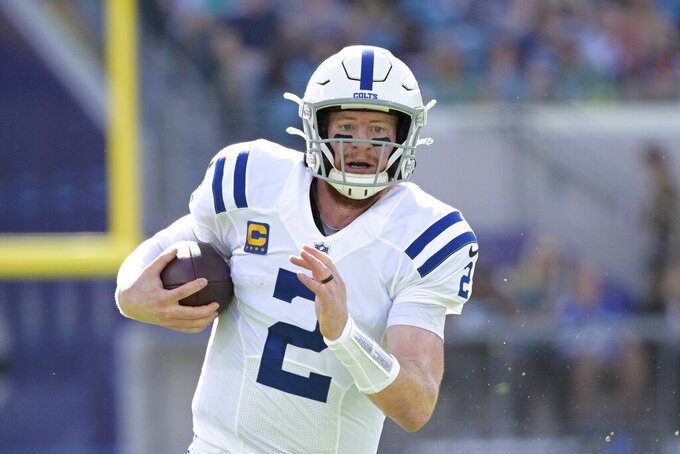 FILE - Indianapolis Colts quarterback Carson Wentz (2) scrambles for yardage during the first half of an NFL football game against the Jacksonville Jaguars, Sunday, Jan. 9, 2022, in Jacksonville, Fla. The Washington Commanders have agreed to acquire quarterback Carson Wentz from the Indianapolis Colts, according to a person with direct knowledge of the situation. The person spoke to The Associated Press on condition of anonymity Wednesday, March 9, 2022, because the deal cannot be finalized until the start of the new league year next week. (AP Photo/Phelan M. Ebenhack, File)

The offense will be getting another new quarterback.

General manager Chris Ballard opened the free-agent period Wednesday by making the deal everyone knew about and the one few saw coming until other singings made Raiders defensive end Yannick Ngakoue available.

That move was reported last week.

But Ballard made a surprise deal in the final hour before signings started. He sent starting cornerback Rock Ya-Sin to Vegas for the 26-year-old Ngakoue, who has 55 sacks in six seasons. Ya-Sin was a second-round pick in 2019 and although he struggled with penalties during his first two years in Indy, he improved significantly last season.

“Thank you Rock for all that you have done for us the pass few years!" three-time All-Pro linebacker Darius Leonard wrote on Twitter.

Ngakoue gives Indy the proven pass-rusher it's been chasing and Bradley a familiar skillset with which to work. Ngakoue played under Bradley in Jacksonville and last season in Las Vegas.

While the move fills one glaring hole on the defense, the Colts now appear poised to be parting with their outside cornerbacks from last season — Ya-Sin and three-time Pro Bowler Xavier Rhodes, who also is a free agent.

Ballard, meanwhile, spent most of the previous 48 hours dealing with his own players.

The biggest holes on Indy's roster remain unfilled, though.

Sam Ehlinger, a sixth-round draft pick in 2021, and James Morgan, a fourth-round pick in 2020, are the only quarterbacks currently signed. Neither has thrown an NFL pass.

So far, Ballard hasn't uttered a word about a possible replacement for Wentz.

And last season's left tackle Eric Fisher also has not re-signed. The Colts lost right guard Mark Glowinski to the New York Giants though Pryor and 2020 draft pick Danny Pinter could be in the mix to replace him. So could Chris Reed — if the Colts re-sign the veteran.