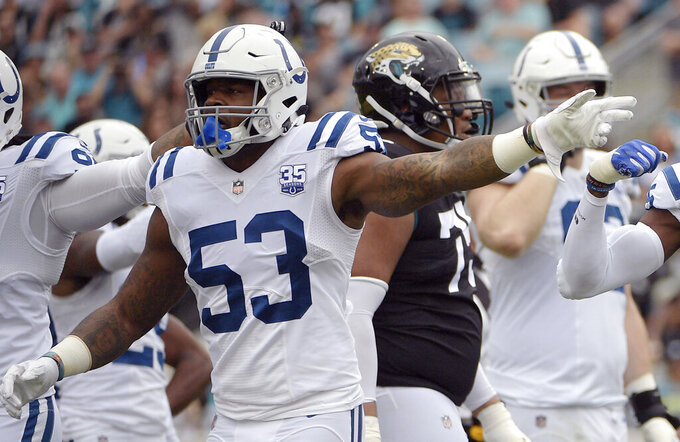 FILE - In this Dec. 2, 2018, file photo, Indianapolis Colts outside linebacker Darius Leonard (53) reacts after forcing a turnover during the first half of the team's NFL football game against the Jacksonville Jaguars in Jacksonville, Fla. Leonard believes better fundamentals will help him reduce the number of missed tackles, and he hopes to create more turnovers. (AP Photo/Phelan M. Ebenhack, File)

Strengths: Everything changed on Saturday night when Luck announced he was retiring at 29. Colts offensive line went from worst to first — in sacks allowed — last season and could be better with same starters for second straight season. Addition of Funchess gives Jacoby Brissett another big threat in red zone and there's deep pool of talented receivers. Brissett also has made big strides since starting 15 games in 2017. All-Pro linebacker Darius Leonard led league in tackles as rookie and expects to exceed that total in 2019. And deep, talented secondary could help defense make big jump.

Weaknesses: Injuries already have taken toll, and not just to Luck, who missed all offseason workouts, all of training camp with exception of three limited practices, then retired in his prime. Kicker Adam Vinatieri, NFL's career scoring leader, missed most of training camp with knee injury, All-Pro left guard Quenton Nelson has been slowed by ankle injury and WR Daurice Fountain has been lost for season with dislocated and fractured left ankle. Linebackers are young and depth could be problem.

Fantasy Players To Watch: WR Deon Cain and TE Jack Doyle. Regardless of which quarterback starts season, Doyle and Cain should be solid options. Cain has big-play skills and Doyle, 2017 Pro Bowler when Luck sat out, has been go-to target during career. And both will be undervalued because they struggled with injuries in 2018.

Expectations: Even without Luck, this season shouldn't be repeat of 2017 debacle. Why? Supporting cast is significantly stronger. Colts have top-five offensive line, deep pool of talented receivers, two Pro Bowl tight ends and solid backfield. Brissett has some valued experience. Defense is much better, too. Addition of Houston should strengthen pass rush. And after finishing 11th overall last season, defense appears primed to finish in top 10.