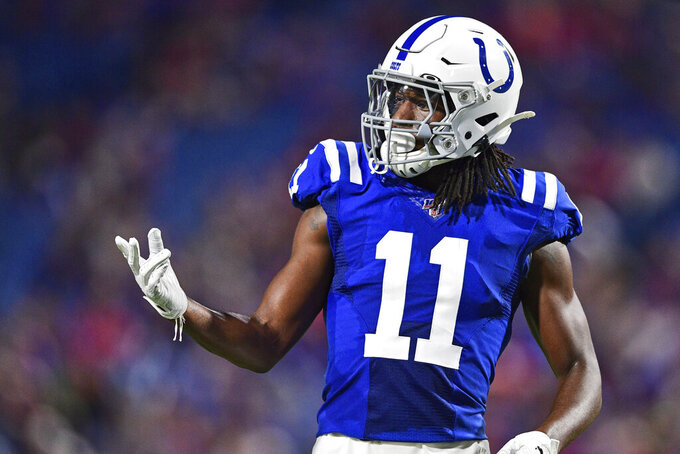 FILE - In this Aug. 8, 2019, file photo, Indianapolis Colts' Deon Cain gestures during the second half of an NFL preseason football game against the Buffalo Bills, in Orchard Park, N.Y. Cain waited a lifetime to show he could play in the NFL. One innocuous cut in last year’s preseason opener put his dream on hold. Now, almost exactly 12 months later, the former Clemson standout looks as good as new. (AP Photo/David Dermer, File)

WESTFIELD, Ind. (AP) — Indianapolis Colts receiver Deon Cain waited a lifetime to show he could play in the NFL.

One innocuous cut on a routine route in last year's preseason opener put his dream on hold.

Now, 12 months later, the former Clemson standout looks as good as new. He's still turning heads with his playmaking ability, still competing for a top-three spot on the depth chart and leaving an indelible impression on the locker room after returning from a torn ligament in his left knee.

"Early on, he was about what I expected. And right now, he's exceeding my expectations," offensive coordinator Nick Sirianni said after watching Cain in another dazzling training camp practice. "Nobody knows his body like him but I really do see that confidence (in the knee) coming."

Confidence never has been a problem for Cain.

The high school quarterback changed positions after complaining to an all-star camp coach the receivers were too timid.

He spent his first two seasons in college fighting with Mike Williams and Artavis Scott to catch Deshaun Watson's eyes before a breakout junior season put him on the radar of pro scouts.

Colts general manager Chris Ballard considered Cain talented enough to overlook a failed drug test in 2015, which led to his suspension for the College Football Playoff, and another suspension that kept him out of spring practice. Ballard drafted Cain in the sixth round, No. 185 overall. Cain returned to his home state of Florida last summer to work out with Hall of Famer Randy Moss.

He made an immediate impact — until he fell to the ground in Seattle.

"One of the traits Deon was flashing was an ability to really win against press coverage and that's really an attribute at this level," coach Frank Reich said after announcing the injury. "But we know we've got something special in Deon Cain. He's a good guy who can become a great player."

The rookie who appeared to be positioned as the No. 2 or No. 3 receiver in Indy's rotation spent the rest of last season in rehab with the first major injury of his career. The Colts also kept him out of their offseason workouts and figured Cain wouldn't completely regain his form until midseason.

But after working out again with Moss in the summer, Cain arrived at training camp without a knee brace or a worry.

So far, Cain has aced each successive test.

He got up quickly after his knees hit the ground hard enough to send dirt flying during the first week of camp. In Thursday's loss to Buffalo, he caught two passes, took a couple of hits and then dropped a pass he thought should have gone for a touchdown. On Saturday, he caught a handful of long balls at practice, demonstrating the skill, poise, body control and attitude Moss helped teach.

"He told me 'Whenever the ball is in the air, it's your ball so go get it,'" Cain said.

The difference this year is Cain faces a much tougher battle.

With four-time Pro Bowler T.Y. Hilton entrenched in the No. 1 spot and free agent Devin Funchess expected to be the second starter, established veteran Chester Rogers is trying to hold off Cain and Daurice Fountain — another second-year player who has played well in camp — for the No. 3 job.

Rookie Parris Campbell, a third-round pick, already has missed the last week with a hamstring injury and is expected to miss more time after Reich told reporters Monday that Campbell had a setback in his recovery.

The Colts also like Zach Pascal and Marcus Johnson, who both finished last season with Indy, and there's not enough room on a 53-man roster to keep all eight.

Cain and his competitors will have another chance to show what they can do Wednesday and Thursday in joint practices against Cleveland, and Cain doesn't intend to make it any easier on the Browns than he has on his teammates or coaches.

"I know everyone wants to make this roster as much as me," Cain said. "It's been a dream of mind to play in the NFL, so I've just got to focus on doing my job because I've never been around so much talent."