Colts return to practice with plan to combat injustices 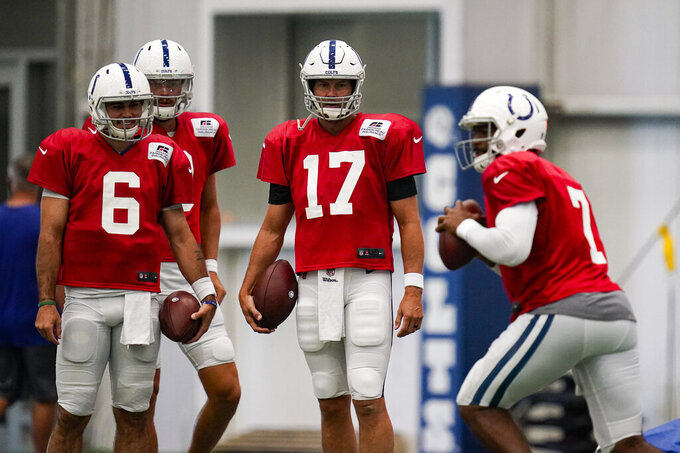 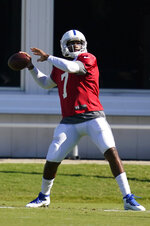 INDIANAPOLIS (AP) — The Indianapolis Colts returned to practice Friday — with a plan and a purpose.

They want to help end racial and social injustice.

After spending Thursday discussing the issues instead of working out, the Colts suited up, worked out and announced the four issues they intend to focus on this season: voter registration and access to polling places; food drives for low-income local families; showing more support for Indianapolis Public Schools; and helping improve community-police engagement.

“We know these things haven’t changed yet and we understood what those Zoom meetings from this summer were," quarterback Jacoby Brissett said. “Yesterday was kind of that kick in the butt, damn man — we fell into that trap of we went back to our jobs and, not that it gets ignored, but we were kind of shifting our focus. Yesterday was more a day of understanding that we can do both at the same time. We pledged it’s not only our duty to do it, but it’s part of our job to do it."

The Colts wasted no time getting started, holding a voter registration drive at the team facility Thursday.

Brissett explained teammates, especially rookies who may not have voted in previous elections, were asked to check on their eligibility status. They continued with coaches and staff members, getting what Brissett called 100% participation.

Linebacker Zaire Franklin then outlined the team's approach, stopping between each point as the rest of the players, coach Frank Reich and general manager Chris Ballard stood behind in unity.

At times, Franklin acknowledged Thursday's discussion was raw. He described a scene in which Black players from coast to coast recounted similar stories of police encounters while they were growing up.

In June, 2018 NFL Defensive Rookie of the Year Darius Leonard used an Instagram post to share a personal account in which he and a group of friends, all non-white, were told to leave a Chipotle restaurant in South Carolina because a white customer claimed they were being verbally abusive. Leonard called it a lie.

“That’s what being Black in America is right now, us not even doing anything wrong, going out to eat with your family, just trying to spend a little bit of quality time," he said in the video. “You can’t even enjoy eating anymore.”

And, at times, the conversation took surprising twists.

Center Ryan Kelly talked about growing up in the family of a police officer, who served for 30 years, and how he attends an annual event for the Indiana chapter of Concerns of Police Survivors, an organization dedicated to helping families and coworkers of police officers killed in the line of duty.

The emotions remained so strong Friday, Kelly briefly stepped away from a Zoom call with reporters before returning to finish the interview..

“It's hard to hear those (police officer's) families, who have people that are never coming home, so it’s hard for me," Kelly said before pausing. “It's hard to see that happen and I know there are good cops out there, that's the thing that hurts me. Then you see bad apples out there as well, that tarnish the name of other people, and I hate to see pain on either side. I'm happy that we're having these tough conversations; every side hurts a little bit and I hope we can narrow that gap a little bit and make a better community."

It's not the first time the Colts have had these discussions. Indy players used two three-hour Zoom calls in May and June to talk about the death of George Floyd in Minneapolis, and police brutality in general.

But when the Milwaukee Bucks opted to not play Wednesday's NBA playoff game, that put the wheels in motion for another round.

“To take a stand together and collectively sit out an NBA playoff game is a major thing that I thought never would actually happen," Franklin said. “I think it helped spark the efforts for what we’re doing in the NFL. I wouldn't say it was the reason, but it was definitely a big inspiration for us."

Now, Franklin and others are ready to put their plan in action.

“We want to help try to mend that relationship in our community, Indianapolis," Franklin said, “between minorities in Indianapolis as well as the police force."