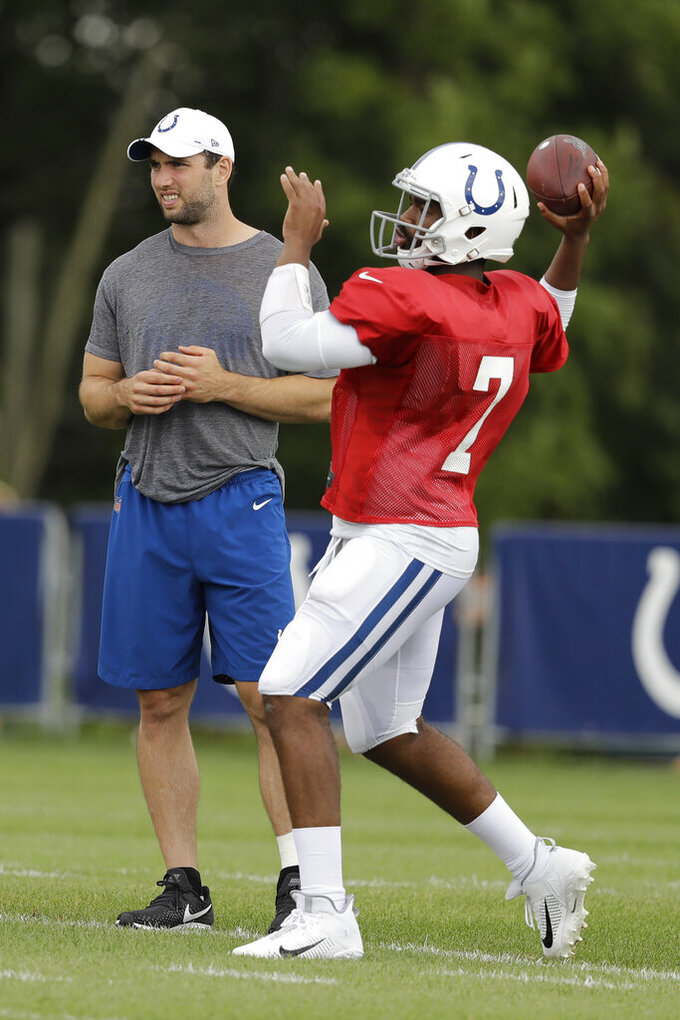 He passed another significant milestone Wednesday..

In the first of two joint practices against Cleveland, Ya-Sin held his own against the Browns' receivers, and quarterback Baker Mayfield never even challenged the rookie in seven-on-seven or 11-on-11 drills.

"I felt like I competed well, felt like I worked hard," Ya-Sin said. "I definitely want to continue to get better, whether it's against a guy on our team or their team."

Ya-Sin didn't go one-on-one with either of the Browns' projected starting receivers — Odell Beckham Jr. or Jarvis Landry, the talented college teammates who were reunited in a draft-week trade. Landry did limited work, none against Ya-Sin, and Beckham again sat out though he was dressed.

Browns coach Freddie Kitchens said Beckham hasn't practiced recently because he "has a little something going on in there" and that he hopes the Browns top receiver returns "soon."

It could happen Thursday when the Browns will help the Colts close out training camp on the Grand Park Sports Campus in suburban Indianapolis. The teams will square off for a third time in Saturday's preseason game, just a short drive away from Westfield, Indiana, where both bleacher sections were almost full and almost equally divided between Browns and Colts fans.

Aside from one brief skirmish between Colts running back D'Onta Foreman and Browns cornerback Lenzy Pipkins, the first workout went pretty smoothly.

"We're not going to take anything from anybody," Kitchens said, explaining why he might not discipline any of his players for the dust-up.

Indy's biggest concern continues to be Andrew Luck's lower left leg injury, which has kept their starting quarterback off the field for all but three practices since April. Luck did not speak with reporters Wednesday but did watch practice in street clothes with his ankle and lower calf areas appearing to be taped.

Luck's return also remains unclear though a decision on his availability for the Sept. 8 regular-season opener could be made in less than two weeks.

"You have to be able to make a call and move from there whether we're full speed with Andrew after that third preseason game or, if at that point, we are going with Jacoby (Brissett)," coach Frank Reich said.

But the joint practices are about more than known commodities.

For instance, the Colts are eager to see how their second-round draft pick fares against new faces and crafty veterans.

"The experience that you get as a young rookie going against another skill set, the learning experience you get from knowing yourself and knowing another opponent and then what works for you and what didn't work is invaluable," defensive coordinator Matt Eberflus said. "We tell our players this all the time — it doesn't matter if it was a good experience or a bad experience, what matters is what you learned after the fact."

Ya-Sin has proven himself a quick learner at every stop he's been lately.

Since December 2017, the Football Championship Subdivision standout transferred to Temple for his final season, was chosen a captain, made scouts take notice at the Senior Bowl and started moving quickly up draft boards with workouts at the NFL's annual combine and Temple.

The Colts thought highly enough of him to take him with their first draft pick in April, No. 34 overall.

What they liked on tape was Ya-Sin's long arms, sturdy body and physical nature — a combination that allows him to play bigger than his listed size of 6-feet, 190 pounds.

But what really sets him apart is his ability to make big plays. He's gotten his hands on the ball almost every day at camp until Wednesday when he never got a chance. And that might be the best compliment of all.

"It's kind of surreal, like a dream come true," Ya-Sin said, referring to the opportunity to line up against some of the guys he's been watching on television for years. "I feel like I worked and created an environment where I could see myself learning."