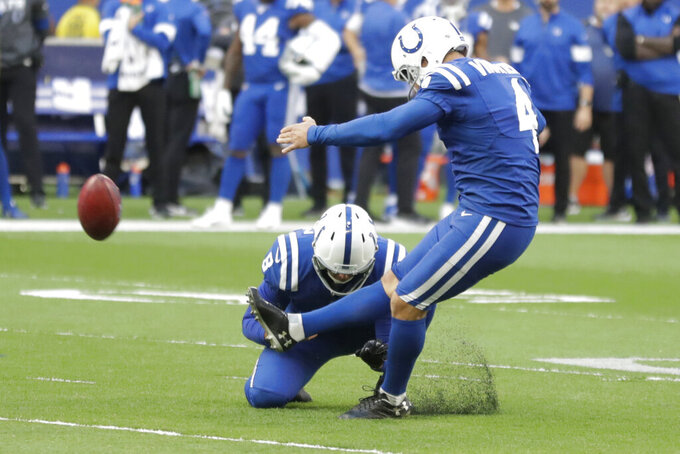 FILE - In this Oct. 27, 2019, file photo, Indianapolis Colts kicker Adam Vinatieri (4) kicks the game winning field goal out of the hold of Rigoberto Sanchez (8) during the second half of an NFL football game against the Denver Broncos in Indianapolis. The Colts now have two kickers under contract for next season while the NFL's career scoring leader, Adam Vinatieri, remains a free agent. On Wednesday, April 29, 2020, team officials announced they had signed 10 undrafted rookies including Rodrigo Blankenship of Georgia, one of last season's top college kickers. (AP Photo/Michael Conroy, File)

INDIANAPOLIS (AP) — The Indianapolis Colts now have two kickers under contract for next season while the NFL's career scoring leader, Adam Vinatieri, remains a free agent.

On Wednesday, team officials announced they had signed 10 undrafted rookies, including Rodrigo Blankenship of Georgia, one of last season's top college kickers.

Blankenship will now battle Chase McLaughlin, who replaced the injured Vinatieri late last season, and perhaps Vinatieri — if the Colts decide to bring him back.

“I won’t comment on that," general manager Chris Ballard said Saturday when asked if the addition of Blankenship indicates the Colts would not re-sign Vinatieri. "And no, I still have to have talks with Adam.”

Vinatieri is coming off the worst season of a brilliant 24-year career during which he won four Super Bowl rings and had some of the most memorable kicks in league history.

But he missed a league-high 14 kicks — six extra points and eight field goals — last season before going on injured reserve in December. He had surgery on his left knee and has been recuperating ever since, hoping for a June return.

But the recovery process has been complicated by the COVID-19 pandemic restrictions.

Vinatieri told local television station FOX59 on Wednesday he still hopes to kick next season and that Ballard tried to contact him during the draft while he was hunting with his son.

The 47-year-old Vinatieri has scored a record 2,673 points, ranks second all-time in games played (365) and and would become the second-oldest player in NFL history to appear in a game — if he makes an opening day roster. Only the late George Blanda and Morten Andersen have played after turning 47.

“Before all of this, my thought was get back and get healthy and if I can kick well, shoot, I figured I could earn a job,” Vinatieri said. “I knew with a six-month, June (timetable), it was going to be tight anyway. If anything, this is going to prolong my recovery."

Indy didn’t waste any time giving McLaughlin a one-year extension after last season ended. He went 11 of 11 on extra points and 5 of 6 on field goals with the Colts.