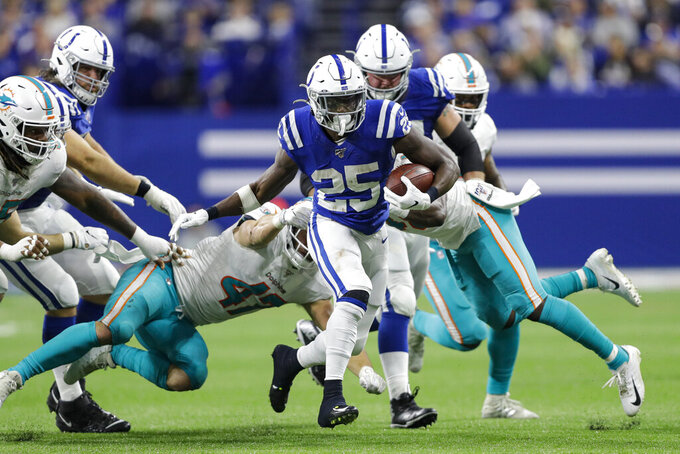 Indianapolis Colts running back Marlon Mack (25) carries against the Miami Dolphins during the second half of an NFL football game in Indianapolis, Sunday, Nov. 10, 2019. (AP Photo/Darron Cummings)

They relied on an offensive line widely considered to be one of the league's top units. They let Marlon Mack set up the passing game with his legs and stretched the field with four-time Pro Bowl receiver T.Y. Hilton.

Now, nothing is going right as evidenced by the Colts' first back-to-back regular-season losses in 13 months.

"Tough loss, tough to swallow — always tough to swallow when you're at home in front of your fans," coach Frank Reich said after Sunday's 16-12 defeat to the Miami Dolphins. "I thought we'd come out with a lot more energy and play better than we did. We got outcoached and outplayed on all fronts, so give the Dolphins a lot of credit for that."

The reality is Indy's defense is playing well enough to win.

It hasn't allowed an opponent to top the 24-point mark in regulation all season, and on Sunday it only allowed one touchdown despite three turnovers.

But the offense has struggled mightily for myriad reasons.

Starting quarterback Jacoby Brissett was knocked out of last week's loss at Pittsburgh because of an injured left knee and was held out Sunday, too. Hilton has missed two straight games with an injured calf and the Colts have been without their other starting receiver, Devin Funchess, since the season opener.

And the ensuing miscues have prevented the Colts from maintaining drives.

All of it was on full display again Sunday when Brian Hoyer was 18 of 39 with 204 yards, one touchdown and three interceptions in his first start with the Colts. Miami (2-7) capitalized on all three turnovers, scoring 13 points.

Hoyer is not the only one struggling.

The Colts managed to gain just 300 yards against the league's No. 29 defense, Indy's vaunted offensive line has allowed 10 sacks in the past three weeks and Mack hasn't had a 100-yard game since Oct. 6.

Even the usually trustworthy Adam Vinatieri is misfiring.

Another errant extra point, his sixth of the season, meant Indy needed to score a touchdown after reaching the Miami 16-yard line with less than a minute left instead of kicking a short field goal to force overtime.

The result: Hoyer threw to the end zone three times, all incompletions, and then threw an 8-yard completion to Eric Ebron on fourth-and-10 to seal the Colts' fate.

"When they're playing man (coverage) you want to advantage of the opportunities and take a shot," Hoyer said. "So looking back, when I realize it's fourth down, you think back and maybe we could have taken a shorter gain, but those three opportunities before that, I felt we had legit chances to score."

Now following their first back-to-back regular-season losses in 13 months, the Colts need to break out of this funk.

Indy is one game behind AFC South-leading Houston and is still ahead of Tennessee and Jacksonville, with the Jaguars (4-6) coming to town next weekend. Then Indy visits Houston on a short week and hosts Tennessee.

While the Colts remain hopeful Brissett and Hilton could return as soon as next week, they can't afford to wait for guys to get healthy.

They must start finding solutions now.

"We should have scored so many points," center Ryan Kelly said. "We just left a lot of points on the board. We got in the red zone a bunch of different times and ended with field goals. In this league, you have to score."