Colts, Steelers eager to show they can shine in prime time 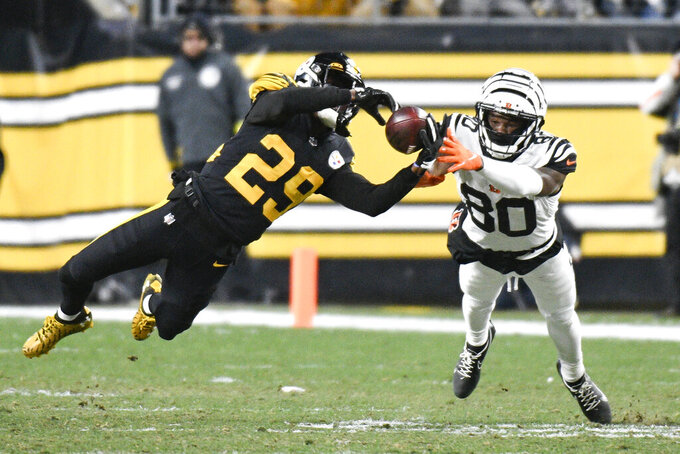 APTOPIX—Pittsburgh Steelers cornerback Levi Wallace (29) dives to make an interception on a pass to Cincinnati Bengals wide receiver Mike Thomas (80) during the first half of an NFL football game, Sunday, Nov. 20, 2022, in Pittsburgh. (AP Photo/Don Wright)

From 2011-20, the Colts played a league-low nine times under the lights at Lucas Oil Stadium.

They hosted no night games from Dec. 14, 2017, until last season when they got a scheduled Thursday contest in early November against the New York Jets and a flexed Saturday night date in mid-December against New England.

An even longer drought will end when Pittsburgh faces Indy in the city's first Monday night appearance since Sept. 21, 2015. Those inside the organization figure it's about time.

“It's a great, great atmosphere, I'm pretty sure Lucas Oil will be rocking and not having to travel is pretty nice too,” longtime Colts center Ryan Kelly said. “You're the only game on TV at that time, right? So go out there play your best, play as a team and it's always the most fun when you win those games.”

It's been so long since Indy had a home Monday night game not a single player on Indy's active roster was around for the Week 2 matchup against the Jets in 2015 and only five current Colts players were even in the league — quarterbacks Matt Ryan and Nick Foles, cornerback Stephon Gilmore, offensive lineman Dennis Kelly and safety Rodney McLeod II.

Indy had lost the previous season's AFC championship game, better known as “Deflategate,” while Peyton Manning was chasing his second Super Bowl ring in his final NFL season. And Colts interim coach, Jeff Saturday, was in his third year as a budding ESPN broadcaster.

The Steelers, on the other hand, have been a featured prime-time fixture for decades.

They have the third-highest winning percentage (.671) in Monday night history and could match San Francisco for most Monday night wins (52) in league history with a win in Indy. The 49ers broke that tie with a 38-10 rout of Arizona in Mexico City last Monday.

Pittsburgh also has won seven of its past eight Monday night road games and has dominated this series, with seven straight victories over the Colts, a 3-0 mark at Lucas Oil Stadium and a 5-0 record in playoff games.

Coach Mike Tomlin hopes it's a recipe to get his team's season back on track.

“We’re excited about Monday night ball,” he said. “We don’t take that for granted, to play in front of a primetime television audience and our peers. Man, that’s something that we covet. But we show our respect for it by how we prepare, our singleness of purpose and then ultimately how we play.”

But this is hardly a promoter's dream.

Indy and Pittsburgh (3-7) started Week 12 with two of the NFL's five lowest-scoring averages. The Colts have lost two of three, the Steelers three of four. And despite making quarterback changes, only Davis Mills and Josh Allen have more interceptions than Indy's Ryan (nine) or Pittsburgh rookie Kenny Pickett (eight).

Tomlin begins this week one loss away from matching a personal single-season career-high, eight, as coach and is two losses from his first losing season in 16 years as a head coach — though the previous 15 all came with Ben Roethlisberger at quarterback.

Yet Tomlin considers it a privilege to be on national television on a holiday weekend.

“There are a lot of challenges in professional sport, working through the holidays and so forth, man, but it’s an awesome opportunity,” he said.

“It’s something that we’re appreciative of. We remember our days as football lovers when we weren’t direct participants and how significant weeks like this were for young people and families and it’s an honor to be a component of it.”

After opening the season with the first tie in the franchise's Indy era and making a midseason coaching change for the first time in Irsay's 25-year tenure as owner, the Colts can prove one of the season's most unwatchable games in their previous prime-time game — a 12-9 overtime victory at Denver that featured no touchdowns — was an aberration.

The Colts couldn't think of a better chance to prove their owner was right all along.

“It's always fun Monday night,” Ryan said. “Now there's Thursday night and Sunday night but when I was growing up, Monday night was it. So I've always found it really fun to play in those type of environments. We've got such a good fan base here, let's give them something to cheer about, something to get rowdy about.”