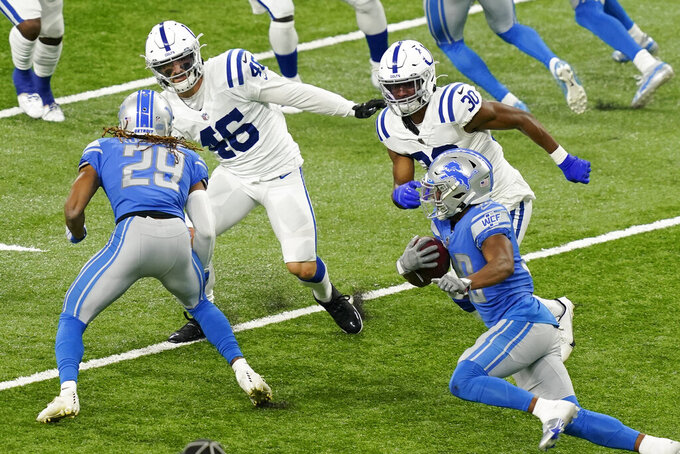 Detroit Lions running back Adrian Peterson, right, rushes during the second half of an NFL football game against the Indianapolis Colts, Sunday, Nov. 1, 2020, in Detroit. (AP Photo/Carlos Osorio)

DETROIT (AP) — The postgame stats stuck out in glaring fashion after the latest home loss by the Detroit Lions.

Detroit's anemic running game — and indeed, its offensive ineptitude in general — had the Lions playing from behind the entire second half Sunday, and they eventually lost 41-21 to Indianapolis. The defeat was Detroit's seventh straight at home. The Lions managed only 29 yards rushing and lost the time of possession battle badly.

“You want to try to do your best to stay balanced all the way through the game,” coach Matt Patricia said. “When that's not happening, it just gets a little bit away from you.”

Detroit's only touchdown of the first half came shortly after the Lions blocked a punt. On their first five possessions, they had only two first downs, and one of those was on the touchdown.

Detroit had only 5 yards rushing in the first half and entered the third quarter trailing 20-7. Unlike the previous weekend at Atlanta, quarterback Matthew Stafford couldn't rally the Lions late.

“Too many third-and-longs. Obviously didn't sustain drives well enough in the first half, or the second half to be honest," Stafford said. "Didn't run the ball as well as we can, obviously, and then just didn't play well enough in the passing game to overcome that.”

Stafford threw for 336 yards and three touchdowns, but he lost a fumble and had an interception run back for a TD. Detroit’s receiving corps took a hit with a hip injury to Kenny Golladay.

“You have to earn the right to rush the passer and stop the pass,” said Colts cornerback Kenny Moore, who returned the interception for a touchdown in the fourth quarter. “In order to win, you’ve got to stop the run.”

Peterson is averaging 3.8 yards per carry in his first season with the Lions. Swift, a rookie, has shown potential, but he was a nonfactor Sunday.

“They have a very good run defense, they've been that way all year. I think they do a phenomenal job,” Patricia said. "Some movement up front that gave us some issues, and I thought they did a good job with their pressure calls, too. They really hit some of those and created some negative plays against us.

“We got to handle all that. We got to do a better job of it, and we got to be able to run the ball. That's just the bottom line.”