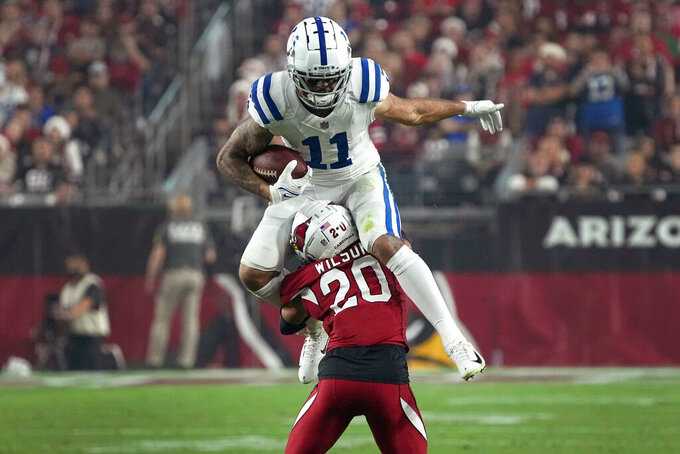 The payoff came Saturday night when they still managed to defeat NFC-West leading Arizona despite losing six starters because of COVID-19 protocols, two more in the first half with injuries, and again being without center Ryan Kelly following the sudden death of his infant daughter,

Afterward, players and coaches lauded Ballard for constructing a roster with so many capable replacement parts — something they might need to rely on again this week after adding five more players to the COVID-19 list Monday.

“We gave him a game ball in there because when you get a day like this and you need everybody on the roster, you thank the man who put it together," coach Frank Reich said afterward. “So game ball to Chris Ballard.”

After Andrew Luck's retirement in August 2019 caught the Colts off guard and prevented them from making the playoffs, Ballard blamed himself. He also promised not to make the same mistake.

Instead, he got to work.

This March, he traded for quarterback Carson Wentz and invested in the offensive line by signing tackles Eric Fisher and Julie'n Davenport along with guard Chris Reed before trading for Matt Pryor in August.

Each played vital roles against the Cardinals. Taylor's ninth 100-yard game put him over 1,600 yards this season, while Pittman caught eight passes and Patmon reeled in the sealing touchdown pass from Wentz with 6:37 left.

They did all that without three-time All-Pro guard Quenton Nelson or right guard Mark Glowinski because of COVID-19, Kelly, and Fisher for more than three quarters because of an injured knee, toe and pectoral muscle. Indy got more than enough production from Pinter, Reed, Pryor and Davenport to win and now they may have to do it all again after Indy's fifth starter, right tackle Braden Smith, went on the COVID-19 list Monday.

The outbreak again has raised questions about a franchise that opened this season with one of the league's lowest vaccination rates, Wentz being one of the unvaccinated players. If Wentz couldn't play at some point, rookie Sam Ehlinger would likely step in.

“We have a plan for the whole team and a plan for certain individuals, Carson being one of them," Reich said Monday when asked about isolating Wentz from his teammates. “I’m not going to get into specific names. Those things are being talked about and discussed.”

But if the Colts demonstrated anything Saturday with playmaking linebacker Darius Leonard and safety Khari Willis also on the COVID-19 list, it was that they've got enough solid components to win even with a depleted cast — something that should give them a boost of confidence heading into Sunday.

“It’s huge, it’s huge," Wentz said. “Especially with the world we live in right now and with COVID, the depth (the roster) has, that we can still go out against a really good team and find a way to get it done."

Overall defense. Even without Leonard, Willis and no turnovers, the defense only gave up 16 points. E.J. Speed and George Odum played well in starting roles.

Indy has repeatedly struggled against mobile quarterbacks this season and Kyler Murray was no exception. His early 57-yard run set up the Cardinals' first score. Arizona averaged 6.3 yards on 21 carries.

T.Y. Hilton. The four-time Pro Bowl receiver has been slowed by injuries all season and it's hindered his ability to become a consistent option for Wentz. But when the Colts needed Hilton, he produced. Hilton scored Indy's first TD and set up the second with a crucial 39-yard reception.

Michael Badgley. The kicker made his first 10 field goals after joining the team in October, but he's gone just 5 of 8 since then and came up short on a 53-yarder Saturday.

Reich said some players sidelined by the virus could return this week, though he wouldn't provide names. Leonard is not expected to play Sunday. Doyle and Fisher will be evaluated throughout the week and safety Andrew Sendejo has not cleared the concussion protocol. But it sounds like Indy may get back Kelly.

10 — A win over Las Vegas would solidify the Colts' hold on the No. 5 playoff seed but it also would give Indy a third 10-win season in Reich's four seasons.

Since starting 1-4, the Colts have won eight of 10, including three straight. They are one of the hottest teams in the AFC, but must continue winning to keep that momentum into what seems like a probable playoff appearance.