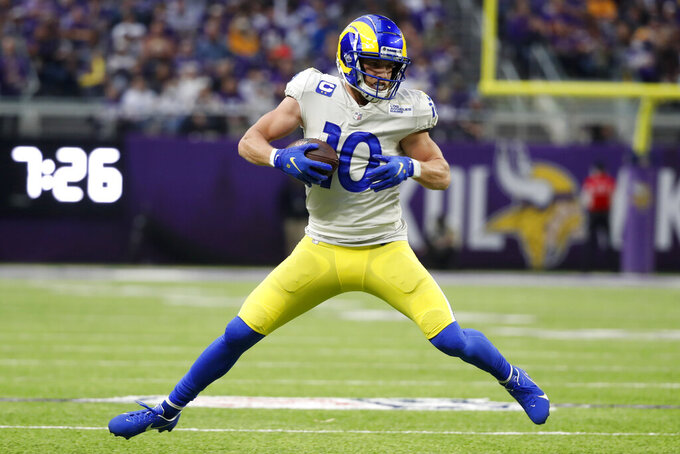 Los Angeles Rams wide receiver Cooper Kupp (10) runs up field after catching a pass during the first half of an NFL football game against the Minnesota Vikings, Sunday, Dec. 26, 2021, in Minneapolis. (AP Photo/Bruce Kluckhohn)

It’s championship week for most fantasy teams, so who we put into our lineups is of utmost importance. That being said, you can’t go wrong with these options, many of whom have been best bets to score throughout the season as well.

There’s no way that Taylor wouldn’t be on the last Best Bets installment of the season, as he’s been the best bet to score at the RB position for almost the entire season. With 19 TDs in 2021, including 11 in back-to-back games up until last week, Taylor has maintained an absurd 37.23% TD dependency on more than 300 touches and his likelihood to have a TD be a part of his fantasy scoring profile continues to be prevalent in Week 17. The Colts play the Raiders this week, who’ve allowed the fourth-most TDs (20) to RBs this season and are our fifth-best matchup on the week.

Chubb hasn’t been the scoring machine that Taylor has been over the course of the season, but he’s on a two-game run of games with a TD going into a game versus the Steelers, who’ve given up the sixth-most fantasy points to RBs and are our third-best matchup for opposing RBs going into Week 17. Cleveland QB Baker Mayfield has been struggling as of late, so expect the Browns to continue to lean heavily on Chubb in a game that would take them completely out of playoff contention if they lose.

Williams has found the end zone in four of his past five games as a rookie, usurping Melvin Gordon as the team’s predominant scoring back as the season wears on. This week he’ll face a Chargers team that is one sided in its ability to defend, as they’re a bottom-10 matchup for WRs but a top-10 matchup for opposing RBs, allowing 21 TDs to backs this season. That’s the third-worst mark this season, and they just came off a loss to the Texans in which Rex Burkhead scored twice. Williams could keep his TD streak going.

Montgomery has been a constant for the Bears recently, touching the ball 20 or more times in four of his past five games. He’s scored twice in that time. He’ll face a Giants team in Week 17 that is our 12th-best RB matchup on the week, having given up the eighth-most fantasy points to running backs this season.

Jones has been pretty much a non-issue this season, right up until Leonard Fournette was sent to injured reserve last week. Jones took advantage of the opportunity in Week 16, touching the ball 22 times and finding the end zone as well. He’ll go up against a Jets team this week that is the best matchup for RBs on the season, having given up a league-high 26 TDs to opposing RBs, so Jones gets his best matchup on the week you’ll need him most.

No Best Bets list would be complete without the prolific Kupp, who’s scored 14 TDs on the season, the highest total of any pass-catcher this season. The 32.38% TD dependent Kupp gets to run rampant on our best WR matchup of the week, the Ravens, who’ve given up the fourth-most fantasy points to WRs this season. Kupp, who’s scored in three of his past four games, is primed to repeat.

Adams has really come on as of late in his scoring profile, finding the end zone seven times over his past five games. This week, he’ll face a Vikings team that is our second-best matchup on the week, having allowed the second-most fantasy points to opposing WRs this season. In this NFC North matchup, we can expect Adams to be the focal point of the Packers offense.

Diggs has been the one constant in the Bills WR group during these fantasy playoffs, as COVID-19 has had an impact. Scoring in back-to-back games, Diggs could reach the end zone again this week against a Falcons team that has given up 18 TDs to WRs this season, making them our third-best matchup in Week 17.

Jefferson has benefitted, from a fantasy standpoint, from Adam Thielen getting injured in Week 13, scoring three TDs in that time. With Thielen on injured reserve, Jefferson remains the primary red zone target against a Packers team that he scored on twice in their first meeting this season.

Scoring in two of his past three games, Cooper has played better in recent weeks after slumping, partly because COVID-19, for a stretch. Now healthy, Cooper is back to his productive ways, and Week 17 should be no exception as he’ll meet a Cardinals team that has given up 21 TDs to WRs, the highest mark in the league. Our eighth-best matchup for opposing WRs on the week, Arizona will have a hard time stifling all three of Dallas’ marquee WRs, of which Cooper is the most likely to score.