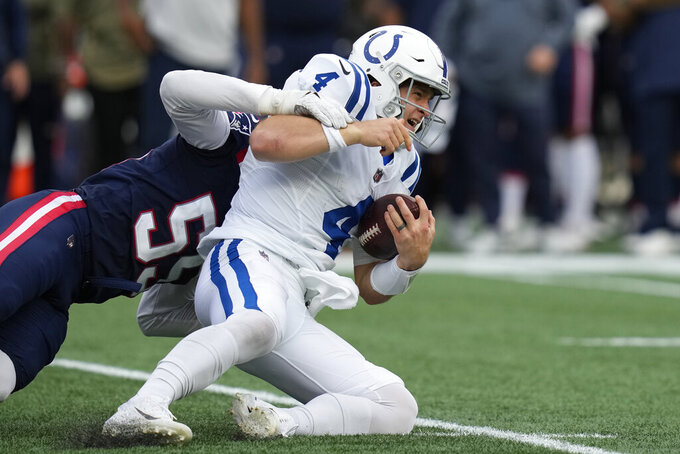 INDIANAPOLIS (AP) — The Indianapolis Colts spent two weeks downplaying the changes at quarterback, on the coaching staff and the trade that sent well-liked running back Nyheim Hines out of town.

They said it's all part of the business.

Now, they must get acclimated to an even bigger change after owner Jim Irsay fired coach Frank Reich and hired two-time All-Pro center Jeff Saturday as interim coach Monday, less than 24 hours after one of the worst offensive performances in team history.

Players didn't blame Reich, the play-caller, for the woes.

“He can’t go out there and play the game,” center Ryan Kelly said Sunday. “Everybody has a job in this league. It doesn’t matter what your role is, you have to do your job. Certainly on offense, we didn’t get it done collectively.”

But this was not a one-time problem or just another bad game.

Indy failed to a score touchdown for the third time this season, allowed nine more sacks to put its league-leading total at 35 and went for 0 for 14 on third down. The 121 total yards and 43 net yards passing were Indy's worst single-game totals since 1997 and the Colts finished with a 0% third-down conversion rate for only the second time on record.

It has been that kind of year.

Week 1 produced the first tie in the franchise's Indianapolis era. A week later, the Colts became the first NFL team to be shut out this season. They used four field goals to win a dreadful Thursday night game in Week 5 and cut ties with Reich after losing their third straight.

Can Saturday fix this? Probably not.

His only coaching experience came as head coach of Hebron Christian Academy in Dacula, Georgia, from 2017-20. Most recently, the Colts Ring of Honor member served as a team consultant and ESPN analyst.

Irsay seems to believe Saturday's playing experience may help Indy find a way out of this mess, starting with finding a solution on a continually changing offensive line that added two more wrinkles Sunday when left tackle Dennis Kelly and right guard Matt Pryor were replaced by rookie Bernhard Raimann and Will Fries.

“I came in here (as a player) and nobody expected anything. I'm coming here, nobody expects anything,” Saturday said. “I’m auditioning, not only for this job, but for 31 others and make no mistake, the job is to win.”

Run defense. Aside from the traditionally poor games against Tennessee's Derrick Henry, the Colts have been among the league's best against the run. It was also true when they limited the Patriots to 70 yards rushing and 2.5 yards per carry.

Offensive line. Where else would you start after giving up all those sacks and clearing holes for just 3.5 yards per rush? The league's highest-paid offensive line has been in flux for weeks and until its solidified, the Colts won't sustain drives.

Bobby Okereke. The linebacker has been ranked among the top 10 in tackles most of this season. He had just four against the Patriots, but this game will be remembered for his knockout punch that forced a fumble to set up Indy's only points.

TE Mo Alie-Cox. Yes, he caught two passes for 13 yards from Sam Ehlinger in what seemed like the first time he's been involved in weeks. Indy also needs one of its tight ends — Alie-Cox, rookie Jelani Woods or Kylen Granson — to emerge as a consistent blocker.

Woods left with a shoulder injury Sunday and defending rushing champ Jonathan Taylor has missed three games with an ankle injury. It's unclear whether Taylor will play next week at Las Vegas and the Colts didn't provide any updates Monday in the wake of the coaching change.

32 — The team that once routinely won shootouts with Peyton Manning and Andrew Luck now ranks last in the NFL in scoring (14.7 points). Indy also is the only NFL team that has trailed after three quarters of every game this season.

The Colts were resilient during Reich's 4 1/2-year tenure, and they'll need to be again when they visit the reeling Raiders this week. Ehlinger says he needs to “let it rip” and make quicker decisions — if he remains the starter. Having a healthy Taylor would help, too. But the biggest question is how they will respond to their new coach and yet another week of tumult.