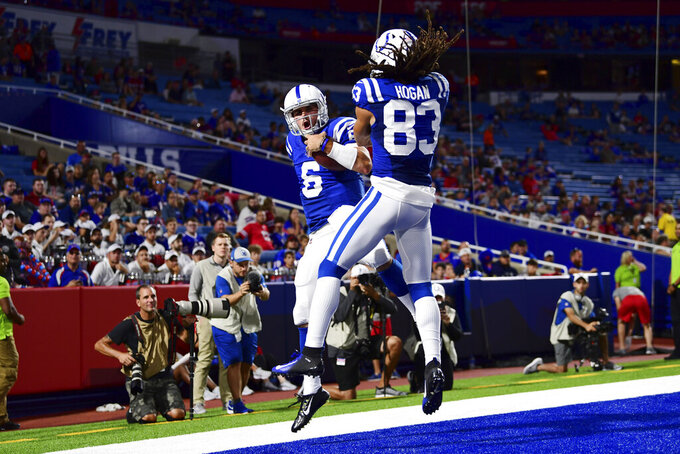 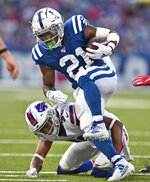 Indy's defense has largely held the upper hand in practice and in Thursday's preseason loss the Colts produced only two first downs in their first seven possessions.

Yes, it's early, Andrew Luck remains out with a strained left calf and nobody at training camp is panicking. But the Colts need to find a fix — and quickly.

"I think we started off kind of rough in the run game today," left tackle Anthony Castonzo said after Sunday's workout in full pads. "I thought we came back, doing the things we're supposed to do with our hands and feet and we were playing better football at the end."

The Colts understand things must change.

In Luck's absence, Jacoby Brissett has been working with a starting unit that has rarely been at full strength.

The coaches kept Castonzo, starting center Ryan Kelly, receiver T.Y. Hilton and tight ends Jack Doyle and Eric Ebron on the sideline Thursday night. They also put Hilton and Castonzo on a lighter training camp schedule in hopes of keeping two of their oldest and most consistent veterans healthy and fresh for the Sept. 8 season opener against the Los Angeles Chargers.

Kelly, Doyle and Ebron, have all been hurt.

Ebron missed the past week with a foot-ankle injury, Doyle has battled an oblique injury since coming back from offseason hip surgery and Kelly finally made it back to practice Sunday after a shoulder injury kept him out since July 31. Getting Kelly back could be just what the Colts need considering the vital role he played in last season's offensive line turnaround with the first 16-start season of his career.

"Ryan is a special player, so having him back in there helps," Castonzo said. "I will say Josh Andrews got in there and did a good job, but it's good to have Ryan back."

Indy can't afford to blame all of the problems on missing pieces — especially with the Cleveland Browns coming to suburban Indianapolis for two joint practices this week.

Offensive coordinator Nick Sirianni makes no secret about his desire to produce a top-five rushing offense this season behind incumbent starter Marlon Mack. So far, though, not much has gone right.

Mack also sat out Thursday when quarterback Chad Kelly led the Colts with 53 yards on four carries. Kelly is in a battle for the No. 3 spot on the depth chart with Phillip Walker.

"There's been things that have been good at camp and things that we saw that have been bad at camp, and I think what we saw (in Buffalo) is that we've still got a little ways to go," Sirianni said. "We definitely want to run the ball better and make the plays that are out there to make. I thought we missed a couple throws, dropped a couple balls, we were in the wrong spots so we've just got to tighten things up a little bit."

Nobody knows when Luck will be back, either.

On Friday, coach Frank Reich said the star quarterback would miss three more practices before he's evaluated on Tuesday when the Colts are off. With joint practices scheduled for Wednesday and Thursday, another off day Friday and the game Saturday, it's unlikely Luck practices this week.

The bigger concern might be Luck's inability to get in sync with newcomers Devin Funchess and Parris Campbell or emerging playmakers Deon Cain and Daurice Fountain, who have impressed coaches with an asssortment of big plays in practice. Luck's injury forced him to miss all of the Colts' offseason workouts and cancel the usual West Coast work he does with receivers, too.

But the Colts have continued to see good things out of Funchess, Cain and Fountain.

"Deon had a huge day," Reich said after Saturday's light workout. "I don't know how many deep balls he caught today but usually in practice if you catch one deep ball, you feel great about it. I think he caught three or four. That's a massive day for a receiver out on the practice field."

They're just hoping the rest of the offense gets it going, too.

"Our defense is posing problems for us, we have to really work," Sirianni said. "We want to clean things up but we also understand that the competition is only going to make us better and we've got good guys on our side of the ball, too."