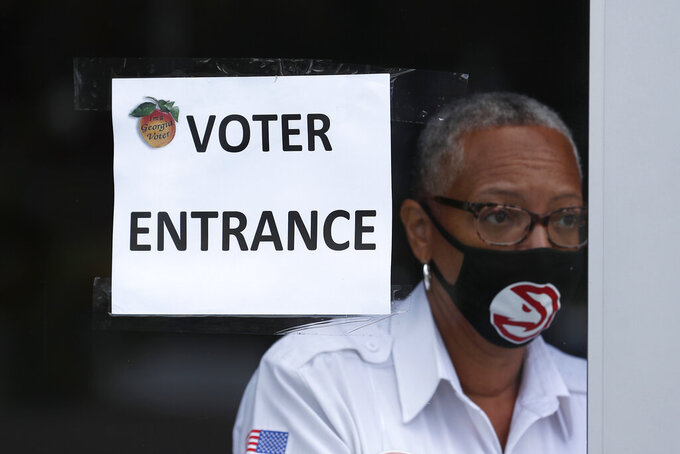 An Atlanta Hawks security guard opens a door before a media tour of the State Farm Arena, home of the NBA's Atlanta Hawks basketball team, Friday, July 17, 2020, in Atlanta. The 16,888-seat facility will be used as a poll location for the upcoming election. (AP Photo/John Bazemore)

ATLANTA (AP) — Kneeling is a powerful gesture. T-shirts send a meaningful message. Locking arms is a mighty symbol of unity in these troubled times.

It doesn't stop there.

If you look even deeper across the gamut of sports, a truly inspiring movement is emerging from the nation's social upheaval, sparked by athletes and coaches and team executives who are no longer content to just shut up and play.

A group founded by LeBron James donated $100,000 to help Floridians with prior felony convictions register to vote. Sports arenas are being transformed into enormous precincts to help lessen the risks of casting a ballot during the coronavirus pandemic. Colleges around the country are getting behind a movement to give athletes a day off on election day.

Sam Cooke sang more than five decades ago that a change is gonna come.

Maybe it's finally coming — and more important, will actually stay a while.

“We're looking for opportunities to make changes that will last,” said Eric Reveno, the Georgia Tech assistant basketball coach who sparked the movement to give college athletes a day off to vote in the Nov. 3 presidential election — even those, like football, that are right in the middle of their seasons.

Reveno doesn't want this to be a one-time-only gesture, either. Next month, the NCAA is set to take up measure that formalizes the #AllVoteNoPlay rule beyond the 2020 election.

“I'd really like to change the number of 18- to 24-year-olds who are voting over the next 10 years," said Reveno, pointing to a demographic that tends to turn out in the smallest numbers on election day. "I really hope to make a difference.”

In early June, when protests were breaking out all around the nation over the death of George Floyd while in police custody, the Georgia Tech coaches held a Zoom call with their players to let them vent their concerns and fears.

One player's comments sparked an epiphany in the 54-year-old Reveno, who has been at Georgia Tech since 2016 and a college coach for nearly a quarter-century.

“I thought back on my life as a coach,” he said Friday in a telephone interview. “I realized that I had probably not done enough, like most coaches, to make sure my players were engaged in the civic activity of voting.”

Ricardo Allen can certainly relate to that. The Atlanta Falcons safety sounds almost embarrassed as he talks about growing up in a family that put little value on voting. He concedes that he was well into adulthood before he learned even the most rudimentary functions of Americas system of government.

“I didn't realize there were so many parts we voted for, that there are people under the president who serve for two years while the president gets four years," Allen said. “I'm realizing that there's much more than just voting for the president."

Armed with knowledge, Allen has taken on a leading role with the Falcons' new Rise Up & Vote campaign, which was launched Thursday on the 55th anniversary of Lyndon Johnson signing the Voting Rights Act into law.

Allen joined quarterback Matt Ryan and other Falcons players in a video that noted the legacy of the civil rights icon John Lewis, whose death last month reacquainted Americans with an enormously consequential figure in the fight for voting rights and social justice.

It was certainly a striking change for Ryan, who has spent his career trying to make sure he doesn't say anything that might stir up the least bit of controversy.

The Falcons plan to partner with the group Rock The Vote on an initiative that will focus on all aspects of the voting process, from registering to learning about the issues to casting a ballot.

“We want to get the word out to people to make sure they are registered to vote and become as civically engaged as they can be. In order to make a change, this is one of the first places where we can do it," Ryan said after a training camp practice this week. “The guys are fired up about it. They have some good ideas.”

The NBA's Atlanta Hawks already came up with a marvelous idea, allowing unused State Farm Arena to be transformed into the state's largest voting precinct. Georgia Tech plans to follow that lead, finalizing plans to allow its basketball arena, McCamish Pavilon, to be used as a precinct in November.

The school also is pushing its players to make the most of their voting day off.

While Reveno stressed that the school's efforts are non-partisan and no one will be shamed for skipping the election, he's determined to change the mindset of the young people he works with every day.

“There are two main reasons why this age group doesn't vote,” Reveno said “One, they don't know how. The process is daunting with all the ID requirements, all the different requirements of how to do it. The complexity of it can be overwhelming. And, two, they don't know if their vote matters. Their apathy is bred by pessimism. They wonder, ‘Does it really make a difference?’”

Georgia Tech's athletic department is hoping to fill the void that so many public schools have abandoned at the lower levels.

“They'll say, ‘I kind of remember people talking about civics class, but I never had it,’” Reveno said. “They don't get that education. But we can do it, and we can do it in dynamic ways.”

While some of those methods may have to wait until the pandemic is under control, Reveno talks excitedly about bringing in civil rights leaders to speak with the players, or taking them on field trips of historic sites around Atlanta.

Some of them may not even know that the birthplace and the resting place of Martin Luther King Jr. are both just a few miles from campus.

Most important, Reveno and others are intent on making changes that will last.

“Hold me to it,” he tells me toward the end of our conversation. “Let's see where we are a year from now.”

Paul Newberry is a sports columnist for The Associated Press.Write to him at pnewberry(at)ap.org, follow him on Twitter at https://twitter.com/pnewberry1963 and find his work at https://apnews.com