Column: Brady moves on, making history with every throw 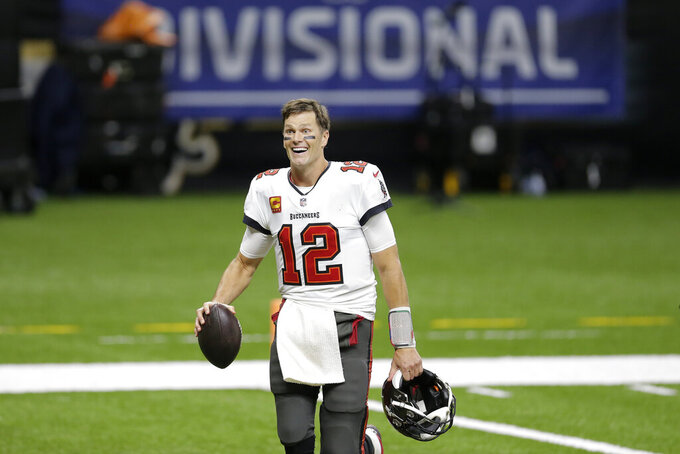 Tom Brady is one win away from the Super Bowl, two wins away from a seventh ring.

If that doesn’t get you excited about the final weeks of the strangest NFL season ever, perhaps the thought of Brady heading to Green Bay next weekend to take on Aaron Rodgers and the Packers will.

Lambeau Field will be as unfamiliar for Brady as putting on the Tampa Bay uniform was to begin the year. But the situation won’t be, with Brady set to play in his 14th conference title game, his first as a member of the NFC.

Best of all, he’ll do it without the dour Bill Belichick there to grab any of the glory.

The greatest ever? Uh, yeah, but was that ever really in doubt?

Certainly not after taking down Drew Brees and the Saints on Sunday in the Superdome. Surely not when Brady can still deliver touchdown passes and find a way to win at the age of 43 in the rookie year of his second career at Tampa Bay.

No, it wasn’t exactly the Brady of old against Brees and the Saints. He barely glanced deep down the field and didn’t need to guide his team to one of his patented last-minute drives to win.

But he was steady, and he didn’t make many mistakes. And on a day when fellow 40-something Brees threw three interceptions — including one in the fourth quarter that Brady and the Bucs quickly cashed in on — that was plenty enough for a 30-20 win.

Just another Sunday at the office for a quarterback whose postseason credentials may never be challenged.

“There’s only four teams left and we’re one of them,’’ Brady said. ”I’m just so proud of everyone, our organization. It’s a really unique team.’’

His team in New England was unique, too, going to nine Super Bowls with Brady under center and winning six of them. Brady’s legacy was secure before he decided to leave the icy northeast and take up residence in sunny Florida, but there were still questions that followed him to Tampa Bay.

Chief among them was who was most responsible for the great run in New England, the quarterback or the coach.

One season didn’t totally answer that, but it should be noted that the Patriots aren’t in the playoffs and Brady is one game away from the Super Bowl with a team that went 7-9 the year before he arrived. No wonder he was all smiles in the Zoom call that followed the game.

Brady beat a great quarterback, too, and not advancing might mean Brees is done at the age of 42. Long after the game was over, Brady went back on the field at the Superdome in street clothes to chat with Brees, who brought his family onto the field.

Brees didn’t commit to retiring, though he looked and sounded a lot like a player who knows he’s done.

For Brady, though, there’s another game on Sunday and, hopefully, a Super Bowl two weeks after that. He knows the drill better than anyone by now, even if playing in frigid Green Bay will be a new experience.

The Packers and Rodgers are favored in the early line by 4 points, much like the Saints were favored at home against the Buccaneers. Winning three games on the road to get to the Super Bowl is a huge challenge, but when Brady is playing well everyone around him tends to play better, too.

That includes the Tampa defense, which came up big with four turnovers.

"This time they turned it over and that’s usually the story of football games,’’ said Brady, who lost to the Saints twice during the regular season.

The Bucs can’t expect that story to play out against Green Bay, where Rodgers is having an MVP season and has won enough in the postseason to understand how to get it done. It’s hard to imagine Brady winning that game with a 199-yard passing performance like he had against the Saints, and hard to figure out how Tampa can move the ball without throwing more downfield.

Asked how the Bucs can be successful in Green Bay, Brady had a quick answer.

"You’ve just got to have some mental toughness and wear some warm clothes,’’ he said.

The mental toughness will be there, that’s for sure. And after playing two decades in New England, the cold weather isn’t going to be an issue, either.

He's already won more rings than anyone. And now No. 7 seems ripe for the taking.

Tim Dahlberg is a national sports columnist for The Associated Press. Write to him at tdahlberg@ap.org or http::twitter.com/timdahlberg