Column: Guys in stripes getting plenty of NFL face time 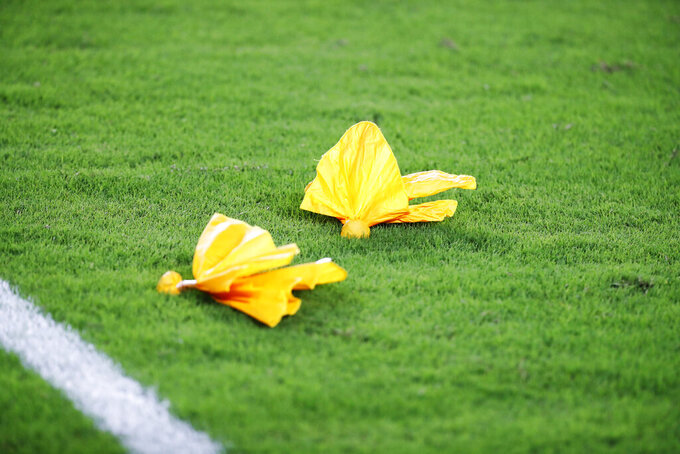 FILE - In this Thursday, Aug. 22, 2019, file photo, penalty flags lie on the field after a play during the first half of an NFL football preseason game between the Miami Dolphins and the Jacksonville Jaguars, in Miami Gardens, Fla. The guys in stripes are getting plenty of NFL face time, and there's plenty of blame to go around as the league deals with a troubling barrage of penalties. (AP Photo/Wilfredo Lee, File)

In the early weeks of the NFL season, the biggest stars are the guys in the stripes.

They're certainly getting the most face time.

The league is awash in yellow — yellow flags, that is — with penalties being called at an alarming rate.

There seems plenty of blame to go around, from confusing edicts handed down by the NFL office to an overstuffed rulebook to aging officials who can't keep up with the speed of the game to players simply making too many silly mistakes.

But there's also a chance we're simply seeing a new normal, as the league adjusts to what everyone hopes will be a safer workplace. I mean, who's going to argue with a crackdown on dangerous hits and less contact during practice, if it improves the odds of players enjoying longer lives and better health in their golden years?

"Just get out there and do our job and do it correctly," said New Orleans Saints offensive tackle Ryan Ramczyk. "If they're going to call it a certain way, that's what we're going to have to do."

Through the first 49 games of the season — three weeks plus Philadelphia's victory over Green Bay on Thursday night — an average of 18.40 flags were thrown, according to the busy folks at nflpenalties.com who track every call.

So, while it's still early, this season is already shaping up as a real outlier.

"I have an issue with the league saying, 'Hey, this is a point of emphasis,' which means, 'We're going to call this completely differently than we've ever called it before, and it's on you guys to adjust to it,'" said Strief, pointing to that as largely the reason for the big increase in offensive holding call the first two weeks. "You're also putting the officials in a situation to call it like they've never called it before."

While the officials are a convenient target of the fans, Strief said that's not fair.

Indeed, there's been plenty of griping about the officiating — led by perhaps the biggest name in the game, New England quarterback Tom Brady. He's hardly alone in complaining that the league has become downright unwatchable at times, as any sense of momentum or continuity is interrupted by a relentless parade of referees flipping on their mics to announce, "Holding, offense, No. 78, 10-yard penalty, repeat first down."

It's like watching "The Godfather" for the first time from the set instead of the theater. Francis Ford Coppola keeps yelling "cut" so Al Pacino can take another crack at his big scene.

The barrage of penalties did drop noticeably in Week 3 after the league, cowering in fear after being called out by Brady, instructed officials to be less stringent with offensive holding. Still, there were still four games in which at least 20 flags were thrown — led by 23 in Chicago's victory over Washington — and the average for all 16 games (16.56) was still higher than any of the last 10 seasons.

One of the worst-offending teams, the Atlanta Falcons, have brought in extra officials at practice to look for infractions and hinted at discipline for those who keep getting flagged. While coaches can't dole out fines for penalties, they can decide who gets to play. The players can also take financial matters into their own hands, Kangaroo-court style. Offensive guard Jamon Brown said multiple penalties are "definitely going to cost you a pretty penny."

"Let's make sure we're only fighting one team. No more self-inflicted wounds that derail us," Atlanta coach Dan Quinn implored his team. "If you've ever been in a two-for-one fight, and you're on the other side of it, it's not that good."

The Falcons (1-2) were flagged a staggering 17 times (one penalty was declined) in their loss at Indianapolis last Sunday, raising their season total to 37. That's the second-highest figure in the league, trailing only the Browns with 46.

Cleveland star Myles Garrett said it's too soon to get too worked up about the increase in flags.

"I think it'll start to cool down." he said. "Tom Brady said something about it, and you know once he says something, it's got to go. I know that those are going to slowly decrease and it's going to get a little bit more regulated, so the game can flow a little bit better."

Dean Blandino, the NFL's former vice president of officiating and now a rules analyst for Fox Sports, expects fewer penalties the rest of the season. The early weeks, he points out, have essentially turned into extended preseason games since most top players play little or not all during exhibition games.

"Teams still have a lot of things to work out," he said. "The football is not as crisp as it's going to be headed into Week 4 and Week 5."

Strief complained that some rules to improve safety — such as a ban on helmet-to-helmet hits of any kind — have led to an increase in penalties.

"The NFL has essentially decided they're going to officiate safety into the game," he said. "You're basically telling players, 'Hey, what you know is wrong. Now, adjust on the fly.' ... You create a lot of hesitancy in players."

There's a lot the NFL can and should do, from better training for officials to a softening of some rules (offensive holding, as we've already seen, and perhaps a bit more leniency on defensive contact beyond the line of scrimmage).

But we're good with any rules to improve safety.

If that means more penalties, we'll just have to make yellow our new favorite color.