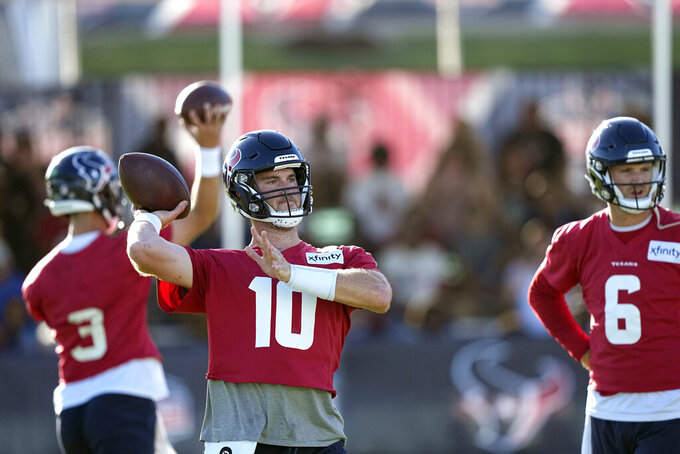 FLOWERY BRANCH, Ga. (AP) — These are giddy times in Atlanta and Houston.

The Falcons and the Texans have yet to lose a game and can talk boldly about defying the NFL skeptics, a group comprised of pretty much everyone outside their locker rooms.

Atlanta coach Arthur Smith got downright testy when asked Friday if he goes about his job any differently when his team is facing such low expectations.

“Who cares?” he said of the grim prognostications (which, full disclosure, I am in total agreement with). “Just go do a Google search, go look and see what they thought of the iPhone coming out if you want to humor yourself. It's hard to find good comedy these days. Go back and look at those predictions if you want real comedy.”

Of course, that sort of bravado is a lot easier to muster in the dog days of training camp, when the actual season is still a month-and-a-half away.

From this vantage point, those 17 games are a pristine canvass on which anyone — even the Falcons or the Texans — could produce a Michelangelo of the gridiron.

Chances are, they'll turn out something closer to Dogs Playing Poker.

Atlanta and Houston are the longest of the long shots in the NFL, a pair of seemingly jinxed franchises that appear headed for truly horrible campaigns, even by their generally low standards.

Just six seasons after reaching the Super Bowl for only the second time in franchise history — and becoming forever known as the team that squandered a 28-3 lead in the biggest of games — the Falcons went into total rebuilding mode by dealing quarterback Matt Ryan and taking a mammoth salary cap hit.

The Texans, who entered the league two decades ago, have yet to reach the Super Bowl, and they have about as much chance of snapping that drought as Chris Rock going on a buddy trip with Will Smith.

The sexual misconduct allegations against franchise QB Deshaun Watson forced Houston to start over, as well.

Good luck, though, getting anyone from the Texans to acknowledge they're actually rebuilding.

“Everybody has the same goal: winning the Super Bowl,” new coach Lovie Smith said Friday, uttering those two words for the first — and presumably last — time this season. "We as coaches have to do a better job, the best job we’ve ever done in coaching. And then our talent, whatever our talent says we should be, that’s what we want to be.”

Teams in other sports talk openly about the necessity of thoroughly rebuilding and the likelihood of it leading to massive losses, a group that includes the Major League Baseball teams in both Houston and Atlanta.

The Astros and the Braves parlayed terrible seasons into World Series championships, and weren't the least big bashful about taking their fans along for the lumps.

But rebuilding is a dirty word in the NFL, especially in light of allegations by former Miami Dolphins coach Brian Flores that he was offered $100,000 to lose games during the 2019 season in order to land higher draft picks.

You'll hear no such talk from the Falcons or the Texans.

“The biggest expectation is to be a team that sticks together and is about the detail and comes to work every day doing the little things," Houston receiver Brandin Cooks said. “As far as the wins and losses, we’re just going to show up and let that take care of itself.”

While much of the league's attention at this early stage is devoted to storylines at the top of the food chain — Tom Brady's unretirement, Watson's possible suspension after being traded to Cleveland, the Rams defending their Super Bowl title — there's always a perverse fascination with the bottom feeders.

Especially with a 2023 draft class that will likely be led by a pair of potential franchise quarterbacks, C.J. Stroud of Ohio State and Heisman Trophy winner Bryce Young of Alabama.

Either would fit quote nicely in Houston or Atlanta, which are the early favorites for the No. 1 overall draft pick.

The Falcons are listed at 250-1 to reach the Super Bowl, longer odds than every team but one. The Texans check in at 300-1, according to FanDuel Sportsbook.

That's not surprising, given their stop-gap predicaments at the most important position on the field.

The Falcons will likely turn Ryan's old job over to Marcus Mariota, a former No. 2 overall pick who is now nothing more than a journeyman. Mariota hasn't started a game since 2019, and there's already plenty of speculation that he'll quickly be supplanted in Atlanta by third-round pick Desmond Ridder.

The Texans are already used to playing without Watson, who voluntarily sat out all of last season amid a fallout with the team and facing allegations from a plethora of masseuses. No criminal charges were filed, but the case still lingers over the quarterback after his trade to the Browns.

Davis Mills, who started 11 games for Houston as a rookie, will apparently keep the starting job for another year. But he's hardly viewed as the sort of quarterback who can turn this franchise around.

The earliest chance for either team to make a course correction appears to be 2023.

In the meantime, a blindfold and earplugs might be the only way to escape all the negativity.

“The biggest thing is just blocking it all out as much as you can,” Falcons defensive back Isaiah Oliver said. “You're gonna see it. Social media nowadays, it's impossible not to see it. But if anything, it just gives you more motivation. Just knowing people have low expectations for you makes you want to go even harder.”

But that's about it.

Paul Newberry is a national sports columnist for The Associated Press. Write to him at pnewberry(at)ap.org or at https://twitter.com/pnewberry1963