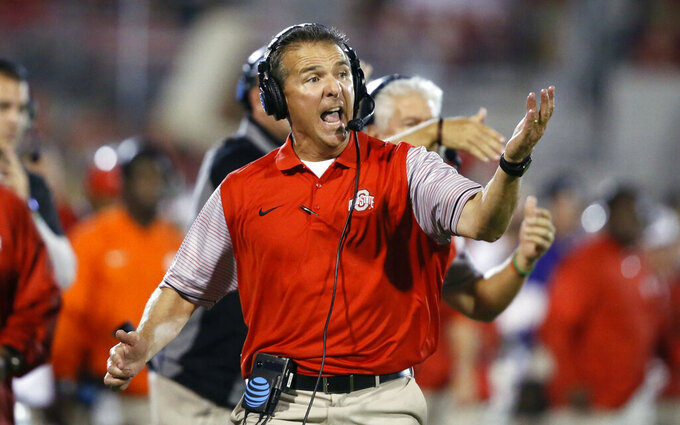 FILE - In this Sept. 17, 2016, file photo, Ohio State head coach Urban Meyer shouts from the sideline in the fourth quarter of an NCAA college football game against Oklahoma in Norman, Okla. A person familiar with the search says Urban Meyer and the Jacksonville Jaguars are working toward finalizing a deal to make him the team's next head coach. The person spoke to The Associated Press on the condition of anonymity Thursday, Jan. 14, 2021, because a formal agreement was not yet in place. (AP Photo/Sue Ogrocki, File) 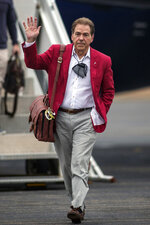 Before the good folks in Jacksonville get too fired up about the arrival of Urban Meyer, let’s review a few cautionary tales.

Like Nick Saban. And Steve Spurrier. And perhaps the biggest flop of all when it comes to college coaches going pro, Bobby Petrino.

Back in 2007, Petrino lasted all of 13 games with the Atlanta Falcons, winning just three times before he slinked back to college in the middle of the night, leaving behind nothing more than a form letter for his abandoned players.

As Petrino and so many others have learned, Meyer can't just pick up with the Jaguars where he he left off at Ohio State after one of the most successful coaching careers in college football history.

Meyer acknowledged the challenges he'll face in a videotaped interview released by the Jaguars shortly after a deal was reached to take over the forlorn franchise.

Petrino certainly learned that the hard way during his brief, ill-fated foray into the NFL.

To be fair, his tenure was essentially doomed before he ever coached a game thanks to Michael Vick's side business running a dogfighting ring. Instead of having one of the game's most dynamic quarterbacks, Petrino was left with Joey Harrington.

But it was clear by Week 3 that Petrino was out of his element when it came to dealing with players who weren't afraid to speak their minds.

Pro Bowl cornerback DeAngelo Hall got into a heated confrontation with Petrino on the sideline during a loss to Carolina. The next day, in keeping with the way he handled things in college, the coach wouldn't discuss what action he planned to take against Hall.

“It is something that we are keeping in house,” Petrino said.

In college, that would've been the end of it. A young player who is totally dependent on the coach for his starting job and playing time would never think to challenge that one-sided relationship.

But Hall wasn't a college kid. He was an established pro. And he wasn't the least bit shy about speaking his mind.

Not long after Petrino declared the issue off-limits, Hall was revealing everything to some two dozen media members crowded around his locker.

He had been fined $100,000. He didn't plan to pay it. He made it clear that he thought Petrino was acting too harshly.

By the time Petrino bolted for Arkansas, having turned in one of the shortest tenures for a non-interim coach since the NFL-AFL merger, the locker room was basically in open revolt.

Petrino drew the ire of the veterans for an aloof, dictatorial style and a bunch of silly, college-like rules, from banishing televisions in the locker room to frowning on any loud talking at team dinners when the Falcons were on the road.

Meyer will learn right away that communication, compromise and carving out a more balanced arrangement with his players are the keys to being a great NFL coach.

He won't be able to run roughshod over his team like he did at Florida and Ohio State, where he became the only coach other than Saban to win national championships at more than one school.

Saban and Spurrier are perhaps the most infamous cases of a highly successful college coach flaming out in the pros.

Saban went 15-17 in two seasons with the Miami Dolphins. Spurrier was 12-20 in two years at Washington before he walked away. Neither made the playoffs.

For Saban, who has won six national championships at Alabama since his dalliance with the NFL, it's always been clear that his desire to have control over every aspect of the organization is far more compatible with the college game.

“I found out maybe I was a little more suited to be a college coach," Saban said. “I enjoyed coaching in the NFL. I love college coaching.”

Spurrier's most glaring blind spot as a pro coach was believing his fun ‘n’ gun offensive system would work just as well in Washington as it did during a dozen years at Florida, running roughshod over the Southeastern Conference. He even had the audacity to think he could win in the NFL with many of the same players who starred for the Gators.

But Spurrier quickly discovered that exemplary college players such as quarterback Danny Wuerffel and receiver Chris Doeriing were nothing more than journeymen in the NFL.

Spurrier, too, turned out to be a mere shell of his former coaching self.

Meyer could follow the path of Jimmy Johnson, who led Miami to a national championship and went on to have even more success in the NFL, winning two Super Bowl titles with the Dallas Cowboys.

Coming off a 1-15 season, the Jaguars will be able to grab potential franchise quarterback Trevor Lawrence with the top pick in the NFL draft. There is plenty of salary cap space to assemble a talented group around Lawrence.

But Meyer's most important moves will likely come in the next few weeks.

“It starts with hiring an elite staff,” he said, “I’m going to spend so much time on that. We’ve had a lot of success in college. If there’s one strength I have, it’s surrounding myself with really, really great coaches.”

If he can bring in assistants with plenty of pro experience, who can smooth Meyer's transition to the NFL, the chances of success will rise exponentially.

Otherwise, he'll find himself heading down the same path as Saban and Spurrier.

Or, even worse, Petrino.

AP Sports Writers Mark Long in Jacksonville and Steven Wine in Miami contributed to this report.