Column: Nassib coming out barely a blip for unbeaten Raiders 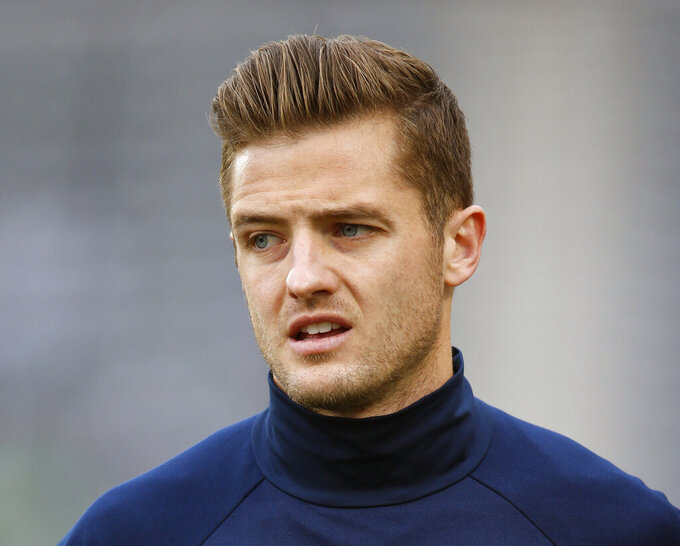 FILE - In this March 12, 2016, file photo, Los Angeles Galaxy forward Robbie Rogers (14) is shown during the first half of an MLS soccer game, in Commerce City, Colo. Rogers played several seasons in Major League Soccer after coming out, but that sport doesn't carry the same weight in this country as the NFL or the NBA or Major League Baseball or even the NHL. (AP Photo/David Zalubowski, File)

There are all sorts of storylines swirling around the Las Vegas Raiders.

They go into Sunday's game against Miami looking for their first 3-0 start in almost two decades. Quarterback Derek Carr is playing like an MVP. The defense is much improved.

Know something you don't hear much about?

Turns out, it didn't cause a major uproar or tear up the locker room when the Raiders defensive end became the first prominent male athlete playing in a major U.S. team sport — the NFL, no less — to reveal he is gay.

After decades of hand-wringing over the supposed negative impact a homosexual player would have on a team's chemistry, Nassib's brave announcement this past summer seems to have largely faded into the background.

“It's a big story, but it's not a story at all,” said Eric Anderson, a professor of sport masculinity and health at the University of Winchester in England.

Indeed, Nassib is just another valued player on a team that has big-time aspirations for 2021.

“Not one person, from my point of view, has treated him any different,” Carr said. “His locker is just a few down from mine, and I want to make sure that he knows that we just want him to play as hard as he can so we can win a Super Bowl.”

So, was Nassib's coming-out no big deal?

There's still plenty of homophobia in this world — and especially in men's team sports, where all sorts of nasty prejudices linger just beneath the surface.

Nassib and the Raiders are, hopefully, leading us toward a more tolerant locker room in all sports.

“He's challenging this idea that the identity of an athlete and the identity of an LGBTQ person do not mix and match,” said Yannick Kluch, director of outreach & inclusive excellence at Virginia Commonwealth University’s Center for Sport Leadership.

Certainly, things have changed for the better.

When I delved into this very issue for a story in 2004, it quickly became clear that many male pro athletes were not the least bit prepared to accept a gay teammate. They openly delivered their hostility.

In the Atlanta Braves clubhouse, I encountered ugly resistance to homosexual rights from future Hall of Famer John Smoltz, who said, "What’s next? Marrying an animal?”

Catcher Eddie Perez took a less-abrasive but similar line, saying he would like to know in advance that he was playing with a gay teammate.

“If I knew a guy was gay, then I could work it out," Perez said at the time. “I could hide when I’m getting disrobed.”

Still, it took 17 more years before someone of Nassib's stature — not an All-Pro, mind you, but a solid player still in his 20s, with 37 starts over his six-year career — to shatter one of the last great barriers in sports.

“It shows how homophobic U.S. men's team sports still is," Kluch said. “There's still homophobic barriers in place that make the athlete feel they are not safe to show who they really are.”

Before Nassib, there were smattering of less-influential breakthroughs.

Michael Sam came out after playing college football, but never made it onto an NFL regular-season roster. Longtime NBA player Jason Collins waited until late in his career to reveal he is gay, playing only played a handful of games before his retirement.

Kluch is hopeful that Nassib is just the beginning of a far more substantial wave of gay players coming out in the NFL, NBA, Major League Baseball and NHL.

Other sports too, such as men's tennis.

“Statistically speaking, there is very likely going to be at least one gay athlete on every single professional men's sports team," he said.

Anderson challenges the notion that there are a plethora of male athletes hiding their sexuality. He said changing norms have steered many young gay males away from the so-called traditional sports — especially football.

“What we've seen is not only the rapid decline of cultural homophobia, but a rapid decline of young men wanting to be associated with that type of masculinity,” he continued. "Young gay boys don't have to play football now because no one cares if they are gay.”

Yet, there are players such as Jaden Vazquez, who came out as bisexual after his freshman year at Fordham, a Football Championship Subdivision university in New York City. He's now a senior linebacker for the Rams.

“I've played since second grade,” Vazquez said. “Football is a game you fall in love with.”

There were challenging times as he coped with his emerging sexuality.

“I was worried that someone was going to out me,” Vazquez said. “I didn't want to act to feminine, especially in such a masculine sport.”

Vazquez hopes that Nassib will inspire other athletes to live openly and proudly.

“There might be younger LGBTQ athletes out there who want to play but are worried about discrimination from others,” Vazquez said. “I know when I was younger, if I had seen LGBTQ athletes, I would have felt more comfortable, more supported, knowing someone else had done it.”

In a season-opening victory over Baltimore, Nassib came up with the play of the game in overtime. He stripped the ball from Ravens quarterback Lamar Jackson, the Raiders recovered, and three plays later Carr delivered the game-ending touchdown pass.

Kluch said it's not surprising that Nassib made such an important play in the very first game of the season, or that the Raiders are off to such a promising start.

“The data shows it's not a distraction, and it can even make a team stronger,” Kluch said. “A team usually performs better if there's trust, if people can be their true selves."

Nassib is being true to himself.

His teammates and coaches only seem to care what he can do to help win football games.

We'd call that a win for everyone.

Paul Newberry is a national sports columnist for The Associated Press. Write to him at pnewberry(at)ap.org or at https://twitter.com/pnewberry1963 and check out his work at https://apnews.com/search/paulnewberry