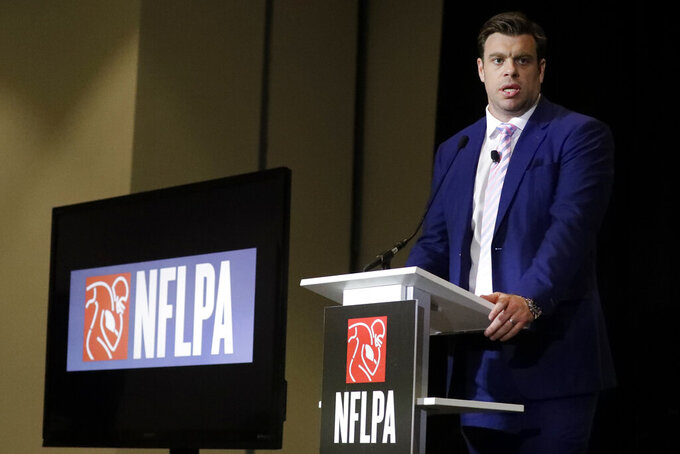 Those are the kind of things negotiated in most union contracts, and the union that represents NFL players got them in the new deal that ties the NFL and its players together for the next decade.

But more work, too? Who would negotiate that?

That’s what a lot of NFL players must be wondering after a vote to approve the new collective bargaining agreement barely squeaked past members. The vote released Sunday revealed a deep schism among players when it came to the centerpiece of the agreement — a 17th regular season game in exchange for owners throwing a few more financial crumbs their way.

There’s no such schism among NFL owners. They’re popping champagne corks after getting players to sign off on a deal that guarantees their golden goose remains golden for at least another 10 years.

What’s not to like about getting more regular-season games — and more playoff games ( though owners can impose that unilaterally) — for the upcoming television deals that will make their billion-dollar franchises even more valuable than before?

``We are pleased that the players have voted to ratify the proposed new CBA, which will provide substantial benefits to all current and retired players, increase jobs, ensure continued progress on player safety, and give our fans more and better football,’’ Commissioner Roger Goodell said.

Not so pleased are some of the NFL’s elite players, who already have big salaries and weren’t looking for more work. They’ll be risking their bodies at least one more Sunday a year when the league goes to an expanded scheduled as soon as the 2021 season.

``It seems like player safety has a price tag,’’ 49ers cornerback Richard Sherman said at the Super Bowl. ``You know, player safety up to the point of, hey, 17 games makes us this much money. So they really don’t care how safe we are.’’

Not safer than before, that’s for sure. A 17th game not only increases the chance of injury to players but adds wear and tear to bodies that struggle to make it through the season intact as it is.

Yes, players do get fewer practices in pads and one less exhibition game as part of the trade off. There are more jobs — and more money — for those who stay healthy and productive.

And retirees make out better, too, with larger pensions and more players included in the pension pool.

That’s all well and good for a union that struggles to get the same kind of deals that baseball and basketball players take for granted. The NFLPA always seems to be playing catch-up when it goes against hard-line owners who have beaten the union down before and would not be averse to doing it again.

But this was a deal that didn’t need to be made, at least right now. There’s still another year left on the current pact, and plenty of time to twist the arms of owners — even with the implicit warning from on top that this was the best they could do.

And to make it for 10 years? Didn’t players learn anything from the current contract that began when some players were still in middle school?

It’s enough to make Dallas Cowboys owner Jerry Jones gas up his new yacht and party like no one had ever heard of the coronavirus.

“Can’t believe we agreed to that lol," Colts tight end Eric Ebron tweeted. "We can only play this game for so long and y’all didn’t want everything we could get out of it? ... 2030 y’all do better.”

Players didn’t agree to it by much. The final vote was a razor-thin 1,019-959 for approving the deal, and some 500 eligible players didn’t even bother to vote.

Hardly an overwhelming mandate. But for many players the promise of more money was too much to resist. Indeed, owners knew what they were doing when they dangled just enough sweeteners in front of players, knowing many are more concerned with what they might make today than what will happen to them over the next 10 years.

Then again, with a pandemic ravaging the world, maybe they figured that even if new contracts aren’t guaranteed, nothing else in life is either.

``I think the coronavirus probably got into some peoples' minds, definitely,'' Denver cornerback Chris Harris Jr. said. ``I had already voted, but I wouldn't have changed my mind. I can see, though, how it could have caused some guys to change from a no to a yes (for financial stability)."

The NFL will soon begin negotiating new TV and digital deals, and more billions to add to league coffers. Players will get a percentage of that, so they’ve got incentive to make a deal for the common good.

The other incentive is that the average NFL career lasts only a few years, so they might as well grab everything they can right now. Players are doing just that in a deal they rushed into making.

And the NFL owners win once again.