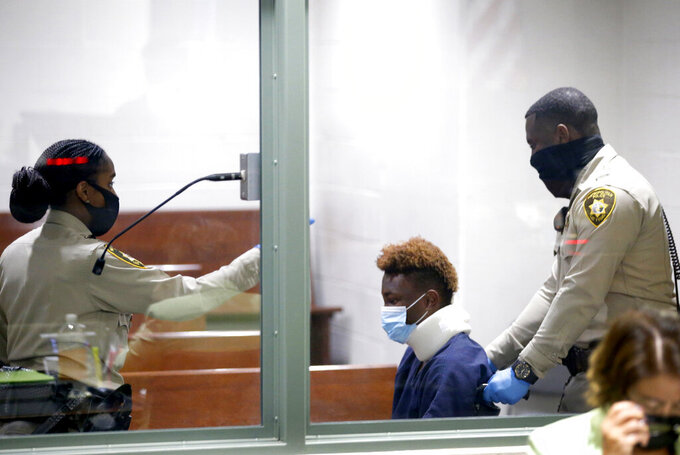 Former Las Vegas Raiders wide receiver Henry Ruggs III is taken out of the courtroom in a wheelchair after making an initial appearance in Las Vegas Justice Court in Las Vegas Wednesday, Nov. 3, 2021. Ruggs is facing charges relating to a fiery vehicle crash early Tuesday in Las Vegas that left a woman dead and Ruggs and his female passenger injured. Photo is taken through a glass window. The team released Ruggs just hours after the crash. (Steve Marcus/Las Vegas Sun via AP, Pool) 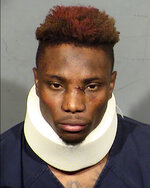 No one spins things like the NFL, but not even its mighty PR machine can make this past week go away.

By far, the most devastating news came from the desert, where the Las Vegas Raiders — already dealing with the fallout from coach Jon Gruden's forced exit over racist, homophobic and misogynistic emails — quickly cut second-year receiver Henry Ruggs III after his high-powered sports car rammed into the back of another vehicle, killing a woman in a fiery crash.

Police said Ruggs was racing along at more than 150 mph and had a blood-alcohol content twice the legal limit when the crash occurred early Tuesday morning, which means the speedy receiver’s NFL career is likely over just as it was getting started.

Of course, that pales in comparison to the personal toll of Ruggs’ staggeringly reckless behavior.

Tina O. Tintor had escaped from war-torn Serbia as a young child and was close to getting her U.S. citizenship, according to relatives, only to lose her life in senseless fashion at age 23.

Heartbreakingly, witnesses said Tintor was still alive, screaming for help, before she and her beloved golden retriever, Max, were consumed by a fireball.

Her family and friends will have to live with that image for the rest of their lives.

Making it all the more infuriating: the prosecutor in Las Vegas said the NFL Players Association has contracted with rideshare services since 2013 to provide free transportation to its members “specifically to prevent tragedies such as this.”

Ruggs was the No. 12 pick in last year’s draft out of Alabama, a blazing receiver who was just beginning to realize his enormous potential through the first seven games of his second season.

Everyone else, including his former Raiders teammates, are left to pick up the pieces.

“I will always be here for him,” said the guy who used to throw him passes, Las Vegas quarterback Derek Carr. “He needs people to love him right now. "

From Carr’s benevolent words, let’s move on to another quarterback who is clearly lacking when it comes to caring for others.

Aaron Rodgers probably thought he was the smartest guy in the room when he said back in August he was “immunized” against COVID-19, deceiving us all into thinking he had taken one of the vaccines developed by actual scientists and proven beyond any shadow of a doubt to be overwhelmingly safe and highly effective.

We now know the the Green Bay Packers' star was choosing his words carefully.

Or, to put it another way, lying.

Dr. Rodgers, which is apparently what he wants to be when he grows up, asked the league to approve his own “homeopathic treatment” as a substitute vaccine. That request was justifiably denied because, you know, we have actual vaccines.

Rodgers has since tested positive for COVID-19, which means he will miss Sunday's marquee game against the Kansas City Chiefs and have to stay away from the Packers teammates he professes to care so much about for a minimum of 10 days.

Rodgers, a regular on McAfee's show, insisted that he's not one of those wackos who believes the vaccine contains a microchip or the Earth is flat.

Then, he proceeded to sound just like them, claiming that he's allergic to an ingredient in the vaccines and, somehow using the medical degree he never actually got, developed his own immunization protocol. He also claimed to be the victim of a “witch hunt.”

“I realize I'm in the crosshairs of the woke mob right now, so before the final nail gets put in my cancel culture casket, I'd like to set the record straight on some of the blatant lies that are out there about myself right now," Rodgers said.

With that, he regaled McAfee and those who listen to podcasts with tales about the vaccine potentially robbing him of his ability to conceive children, how he's treating his current condition with an array of drugs including Ivermectin (yep, that horse de-wormer), and giving a shout-out to well-known immunology expert Joe Rogan, Not An M.D., for helping advance the cause of alternative medicine.

That nonsense aside, the more troubling issue for the league in all this is a familiar one: the lack of openness or accountability when it comes to crises that the NFL would prefer to just go away.

For instance, most of the details on an extensive investigation into the toxic owner of the Washington Football Team, Dan Snyder, were quickly shoved under the rug, with Gruden's emails — which had nothing to do with Snyder — being one of the few snippets to leak out.

Chances are, the league will take the same tack when it comes to Rodgers, the highly popular face of one of the league's most prominent franchises and, somehow, a guest host on “Jeopardy!”

Shuffle a few papers, issue some vague pronouncements, tout the Super Bowl halftime show, and ultimately hope everyone forgets any of this happened. (Which, frankly, always seems to work).

We'll probably never know if Rodgers violated any of the supposedly strict protocols for unvaccinated players, though attending a team Halloween party dressed as John Wick probably qualifies (if nothing else, for bad taste).

Packers coach Matt LaFleur insisted that the team followed all league-mandated protocols on his watch.

He was later asked if Rodgers failing to wear a mask during news conferences contradicted his claim.

“That’s not what I said,” LaFleur shot back. “I said within our football space. Meeting rooms, walk-through, everything we do in that area. I don’t pay attention to the media rules.”

In fairness to the Packers, Rodgers is hardly the only unvaccinated player to speak to reporters without a mask, so we can presume that's not part of the NFL's protocols.

That needs to change. While they're at it, the league should also require masks for unvaccinated players anytime they're not on the actual playing field for a game or practice.

Like those of us in the media, teammates who have chosen to be good citizens deserve to be protected.

Finally, we were going to move on to Odell Beckham Jr.'s latest three-ring circus, which involved a daddy sharing videos to show how badly his grown son was being treated by the mean quarterback, but we've run out of time.

Besides, the Cleveland big top closed on Friday.

The Browns are releasing their mercurial receiver.

With that, some good news for the NFL's spin masters.

The week is almost over.

Paul Newberry is a national sports columnist for The Associated Press. Write to him at pnewberry(at)ap.org or at https://twitter.com/pnewberry1963 and check out his work at https://apnews.com/search/paulnewberry