Column: No sweat when it comes to funding new stadiums 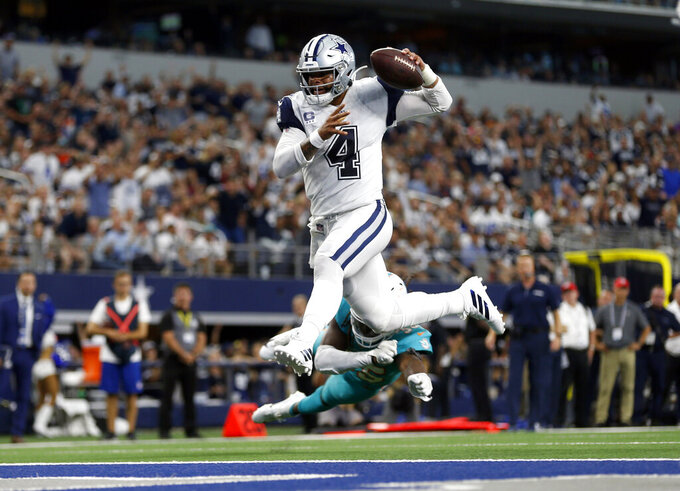 Dallas Cowboys quarterback Dak Prescott (4) gets past Miami Dolphins defensive back Walt Aikens (35) and into the end zone for a touchdown in the second half of an NFL football game in Arlington, Texas, Sunday, Sept. 22, 2019. (AP Photo/Ron Jenkins)

The question isn't whether taxpayers in Arlington, Texas, got hosed when they agreed to spend a half-billion dollars for a new ballpark next door to the one they spent millions to build just 22 years earlier.

They did, but in most parts of the country that's the way the system works. Almost every new stadium or arena comes with a taxpayer price tag so that billionaires who own teams don't have to dig into their own pockets to pick up the tab.

At least in Arlington they went into it willingly. Taxpayers there approved a measure in 2016 for the city to issue $500 million in bonds that will be paid off over the next 30 years with a half-cent of sales tax and hotel and car rental taxes.

That will get fans out of the heat and ensure the Texas Rangers remain in the city that also houses AT&T Stadium, also known as Jerry World. Like the Cowboys, the Rangers' new $1.1 billion stadium — which replaces one that opened in 1994 — has a roof, something noticeably lacking at the ballpark that closes Sunday after a final series against the New York Yankees.

Fans in Texas like their sports, and they don't mind paying. All told they've funded two baseball stadiums and one giant football stadium in a quarter century in Arlington alone, all paid for by increased taxes that total $1 billion without inflation, according to Dallas Morning News

They're not alone, of course. Drive down the Las Vegas Strip and there's a $2 billion stadium going up — partly funded by $750 million in taxpayer money — that will house the Raiders next year along with events too big for the city's arenas and showrooms.

And in Atlanta, two horrible deals to replace football and baseball stadiums that still had the new game smell will end up costing taxpayers a billion dollars or so.

The stadium scam has been going on for so long that it's hard to get terribly excited about it. Team owners and developers know the playbook well, and the saps who actually pay for their edifices usually don't stand a chance.

Contrast that to what's happening in Los Angeles, where both the politicians and the residents seem to be smarter than the average billionaire.

Walk into Dodger Stadium and it's as beautiful as it was when it opened 57 years ago. To make sure it stays that way the Dodgers are investing $100 million of their own money during the offseason to develop the space behind the outfield into a fan-friendly plaza.

Go see a football game at the Coliseum and the place is sparkling, thanks to a $315 million renovation that didn't require taxpayers to put up a penny. The update even included improvements to the iconic peristyle that looks even better than it did when the stadium opened in 1923.

And then there's the $5 billion project that will open next year in Inglewood as home of the Rams and Chargers as well as restaurants, hotels and a performing arts theater. It will be the most expensive stadium complex ever and promises to be a stunning addition to the Southern California landscape.

And the best thing? Rams owner Stan Kroenke is footing the bill.

The same thing is happening up north in San Francisco, where the Warriors will open play this year in the $1.6 billion Chase Center. With no chance of getting taxpayers to chip in, the Warriors are paying for it themselves.

I'll repeat that. They're paying for it themselves.

Yes, it still comes with a price tag, as do the other California projects. But it will be paid by the fans who actually attend games, not by entire populations that might have no interest at all in sports.

People in California seem to understand what people in Texas don't. They're taxed enough to begin with, and don't need even more money to come out of their pockets for corporate welfare for wealthy team owners.

That's why the Chargers left San Diego, and why the Raiders are headed for Las Vegas. Unfortunately, there's a price to be paid for refusing to stand still for a shakedown, and it cost San Diego and Oakland their NFL teams.

Down in Texas, meanwhile, they still have all their teams — and soon will have something to show for their giveaway.

Next season they can sit at a baseball game and not sweat.