Column: Smith-Schuster fires up foes through jigs and digs 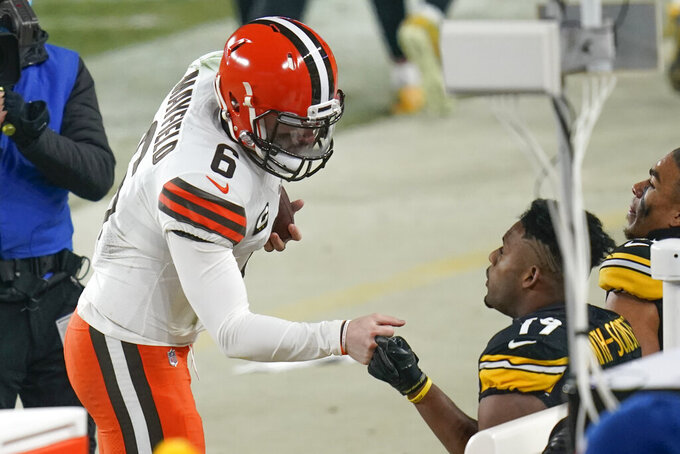 Say this about Ju-Ju Smith-Schuster: he sure knows how to fire up foes through jigs and digs alike.

Baker Mayfield trolled the Steelers star Sunday night, bellowing, “The Browns is the Browns!” as he hurried to join his delirious teammates following Cleveland’s 48-37 AFC wild card win at Pittsburgh.

In the leadup to the game, Smith-Schuster was asked if this year’s Browns were any different than those in years past after their AFC North rival had ended an 18-year playoff drought.

He said he thought “they’re still the same Browns teams I play every year” and while they had talent, “the Browns is the Browns."

Not anymore. The Browns snapped their 17-game losing streak at Heinz Field with their first road playoff win since 1969.

“You know, I don’t regret what I said,” Smith-Schuster allowed afterward. “I said the Browns is the Browns. They came out and they played a hell of a game. You know, there’s been games where we feel we lose them and today wasn’t our night and hopefully the same Browns will show up next week ... and go out and do the same thing they did tonight and have a hell of a game.”

The sixth-seeded Browns (12-5) visit top-seeded Kansas City (14-2) Sunday and the Steelers face an earlier-than-expected reckoning after following their franchise-best 11-0 start with five losses in their last six games.

Last month, the Bills and Bengals took exception to Smith-Schuster's habit of dancing on other teams’ midfield logos before games and posting the videos on TikTok.

“That turns you up a little bit,” Buffalo safety Jordan Power said after the Bills’ 26-15 win over Pittsburgh in Week 14. “Gets you a second itch to play with some extra fire.”

A week later, Smith-Schuster’s dance routine on the Bengals’ logo was recorded by teammate Chase Claypool. Then, Smith-Schuster caught just three passes for 15 yards in a 27-17 loss at Cincinnati. He also coughed up the football on a booming hit from Bengals safety Vonn Bell.

Coach Mike Tomlin didn’t like Smith-Schuster’s dancing, not because it motivated opponents but because it was a universal sign of disrespect on the gridiron.

“For the betterment of myself and my teammates, I’m going to stop dancing on the logos,” Smith-Schuster declared after that loss to Cincinnati.

What he continued doing, however, was firing up his opponents.

And even a day after they were eliminated from the playoffs, the Steelers were still talking smack about the Browns: Claypool went live on TikTok to say, “Bad loss, but the Browns are gonna get clapped next week, so it’s all good.”

There were several other notable calls as the NFL continued its pandemic season through the first round of the expanded playoffs, including coaches Mike Tomlin of the Steelers and Mike Vrabel of the Titans making head-scratching decisions to punt in the fourth quarter while trying to complete comebacks.

A big decision came Monday night in New England, where the Patriots missed the postseason for the first time since 2008.

Bill Belichick announced he wouldn’t accept the Presidential Medal of Freedom in the wake of last week’s deadly siege on the U.S. Capitol, saying “remaining true to the people, team and country I love outweigh the benefits of any individual award.”

President Donald Trump had announced on Saturday, three days after the riots, that he would be awarding Belichick the nation’s highest civilian honor on Thursday — part of a late flurry of presentations that also included golfers Annika Sorenstam and Gary Player.

Sorenstam and Player accepted their awards in a private ceremony the day after Trump supporters, exhorted by the president to go to the Capitol and “fight like hell” against a “stolen” election, overran and occupied the U.S. Senate and House of Representatives in an explosive confrontation that left U.S. Capitol Police officer Brian Sicknick and four others dead.

“I was flattered ... out of respect for what the honor represents and admiration for prior recipients,” the coach said in a statement, which was forwarded by the Patriots to the Associated Press.

“Subsequently, the tragic events of last week occurred and the decision has been made not to move forward with the award. Above all, I am an American citizen with great reverence for our nation’s values, freedom and democracy. I know I also represent my family and the New England Patriots team.”

In 2016, Trump publicized a letter from Belichick wishing him well in the election that year.

In the aftermath of George Floyd’s death this summer, Patriots players praised Belichick for providing an open forum for them to express their feelings on race and social injustice in America. In his statement on Monday, Belichick called that “one of the most rewarding things in my professional career.”

Finally, the New Orleans Saints spurred backlash on social media Sunday for deleting a tweet that showed quarterback Drew Brees in a ”#SayHerName” T-shirt. He and his teammates have worn the T-shirts throughout the season in pushing for justice for Breonna Taylor, who was killed during a police raid in Kentucky last year.

After the tweet caused some to believe the message was in support of the woman who was killed while storming the U.S. Capitol last week, the Saints removed the post. They replaced it with a photo of Malcom Jenkins wearing the same T-shirt along with an explanation of why players were wearing them.