Column: Stars line up in LA for surprising Bengals 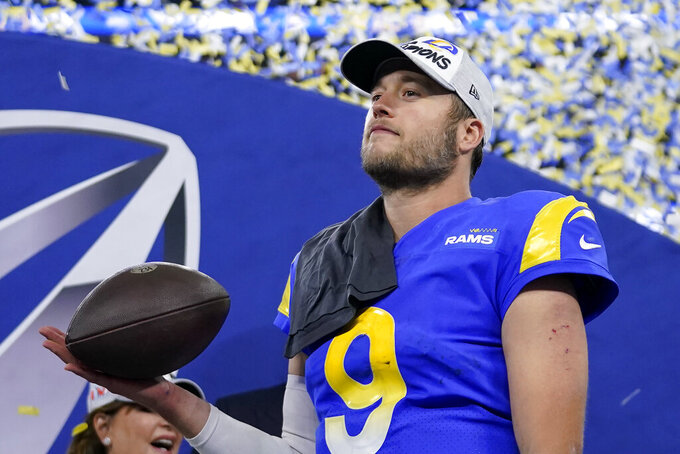 It’s not that difficult to figure out how the Los Angeles Rams made it to the Super Bowl. They were built much like the glorious edifice that is their new home, with the checkbook always open whenever a new shiny bauble attracted their attention.

The quarterback came in an audacious swap of passers with the lowly Lions. A feared, if somewhat disgruntled, receiver was picked up midway through the season after the Browns couldn’t find a way to trade him. And, of course, defensive star Von Miller was making tackles in Denver one week, and in a Rams uniform the next.

From Matthew Stafford to Odell Beckham Jr. to Aaron Donald to Cooper Kupp, there are stars everywhere, as befits a team that plays in a glittering $5 billion palace just down the freeway from Hollywood. Heck, the Rams even brought safety Eric Weddle out of a comfortable retirement for the playoffs and he responded by making more tackles — nine in all — than any of his teammates in the win over San Francisco that put the Rams in the Super Bowl for the second time in four years.

Sure, they may have mortgaged their future to do it. But in sports, the future is usually now.

Contrast that to the way things operate in Cincinnati. The Bengals are so tight they don’t even have an indoor facility to practice in when the weather turns bad as it did this week, forcing them to use the bubble at the University of Cincinnati. Their scouting department is threadbare, there is no general manager, and they’ve seemed content over the years to save money and not worry much about beating their division rivals.

That the Bengals have a quarterback seemingly destined for greatness is only because they lost so many games to get in position to pick Joe Burrow in the 2020 draft. They also have an owner in Mike Brown who doesn’t like change or paying off contracts, so coach Zac Taylor was brought back this season despite going a miserable 6-25-1 in his first two years with the Bengals.

The Bengals are so historically bad they couldn’t sniff an appearance in prime time this year. Not on “Sunday Night Football,” not even on Monday.

Now they’re 3-0 in the playoffs and in the Super Bowl for the first time in 33 years. Yes, they’re underdogs against the Rams, but it’s hard to bet against a team oozing with a confidence — and cockiness — not seen in Cincinnati since Ickey Woods was doing the Super Bowl shuffle.

Something finally clicked on a team where nothing ever seemed to click.

“When I showed up guys were really ready to work,” said D.J. Reader, who was signed in 2020 to a $53 million deal as part of a defensive upgrade that included cornerback Trae Waynes and safety Vonn Bell. “Guys who had been here, they were hungry to win. Coaching staff was hungry to win. You just got to learn those things, learn how to win, how to go about the process of winning.”

How it all came together isn’t entirely a fluke. The Bengals drafted well in recent years and opened up the pocketbook just enough to sign other players to make up for picks that didn’t work.

Oh yeah, they also drafted a kicker. Yes, a kicker.

Evan McPherson has been as good as his nickname, Money Mac. He’s a perfect 12 for 12 kicking field goals under playoff pressure, and it was his right leg that provided the margin in the team’s last two wins.

His mouth was pretty good, too, when, before kicking the game-winner against Tennessee, he told teammates that the Bengals were going to the AFC title game.

Attitudes like that make the Bengals a team that’s easy to root for, especially in this game. The small-market team with cute tiger stripes on its helmets faces the mighty Rams — and has to play them at their home.

The philosophies of the two teams differ not only because of market size. While the Bengals under the Brown family have largely been content just to be in the league, the Rams came back to Los Angeles looking to make the kind of splash that sells out SoFi Stadium for years to come.

Judging from the number of 49er faithful at SoFi last week, fans in Southern California haven’t embraced the message just yet. A Super Bowl win comes with a parade, though, and that might help them warm up to a team that abandoned the city for St. Louis only to come back more than two decades later.

In a quarterback-driven league, that means Stafford needs to come through in the biggest game of his life just as he did most of the season. The Rams gave up three draft picks and their starting quarterback, Jared Goff, for Stafford in one of the boldest trades in NFL history.

“We went out and got him because we thought it was a chance to be able to get a great player of his magnitude,” Rams coach Sean McVay said. “What he’s done, he’s elevated everybody around him. He’s made me a better coach. He’s made his teammates better.”

It’s a gamble of the highest magnitude, one that can’t be judged until the clock runs out Sunday in Los Angeles. It’s the kind of gamble that would be unthinkable in the Bengals organization, but they’re in the Super Bowl, too.

Proof, perhaps, that there is more than one way to win a championship.