Column: Think you know 2020? Some sports predictions for you 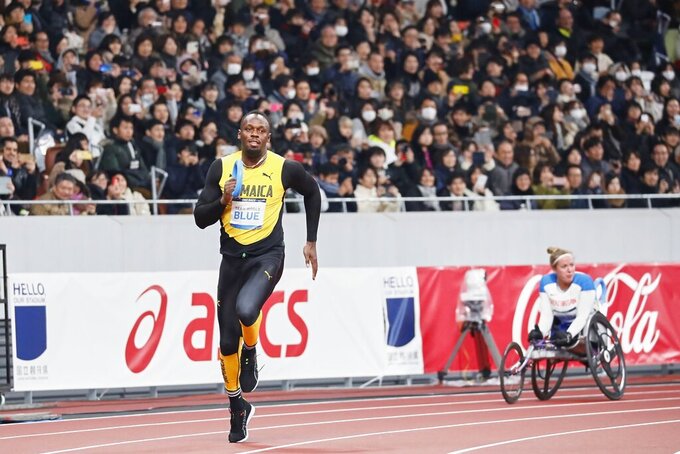 In this photo provided by Japan Sports Council (JSC), Olympics gold medalist Usain Bolt, left, of Jamaica runs at the opening ceremony of the New National Stadium, the main venue for the Tokyo 2020 Olympic and Paralympic Games, in Tokyo, Japan, Saturday, Dec. 21, 2019. (JSC via AP)

Predictions aren't for the faint of heart, as anyone who has ever given money to a bookmaker can attest. Strange things can happen, which is a big reason why they still play games.

Still, with every new year comes the hope that this might be the year some of them come true.

With that in mind, let’s begin. There's a new decade dawning and, who knows, these things might actually happen in 2020:

BRADY RETIRES: Tom Brady announces his retirement midseason, shocking New England fans who assumed he would play until he was eligible for Medicare. An emotional Bill Belichick struggles afterward to find the right words to honor the quarterback who won six Super Bowls and made the Patriots the dynasty of the early 2000s.

“Right now we’re just worried about getting ready for the Bengals,” Belichick said.

OLYMPIC GLORY: Usain Bolt comes out of retirement for the Olympics in Tokyo, and oddsmakers quickly make him the favorite to win another three gold medals in the speed events. Instead, Bolt decides to compete in skateboarding and becomes the first to land a 720 Gazelle Flip as he takes gold in the newest Olympic sport. In related news, Michael Phelps announces plans to compete in break dancing in the 2024 games in Paris.

STEALING AWAY: The Houston Astros stumble early in the season, with hitters swinging wildly at pitches they don’t recognize. Desperate for contact, they devise a system of tin cans connected by string to relay signals from center field to the dugout. The Astros immediately go on a 15-game winning streak, then issue a statement blaming irresponsible reporting by the fake media for the team’s early struggles.

HALL OF FAME: Barry Bonds finally gets elected to the Hall of Fame, boosted by the support of a new wave of analytics-driven baseball writers who say his overwhelming numbers can’t be ignored any longer. In particular, they cite his dominance (.845, adjusted for cap size) in the emerging category of superstar players who used both the cream and the clear (SPCCA).

BEAST MODE II: Marshawn Lynch gets the ball this time, scoring from the 1-yard line as time expires to give the Seattle Seahawks a 21-20 victory over the Patriots in the Super Bowl. Afterward, Lynch said his beef with the media was all a misunderstanding and begins regaling reporters with stories about his career, beginning with his first touchdown run as a 9-year-old in Pop Warner football.

DRAFT DAY: LSU's Joe Burrow is the No. 1 pick, and he is greeted with big cheers not only by the three extremely hungover Bengals fans in attendance but those holding betting tickets on him at 40-1 to begin the year. NFL owners attend in record numbers, then vote unanimously in special session to hold the draft in Las Vegas for the next 10 years.

NBA: The Lakers collapse midseason, and Magic Johnson comes back to the team to mediate a lingering dispute between LeBron James and Anthony Davis over who has the biggest mansion in Beverly Hills. With Steph Curry playing on the Korn Ferry golf tour and Kawhi Leonard taking some time off to rest, the Utah Jazz go through the playoffs undefeated to win their first NBA title.

DODGERS DELIGHT: Tired of losing because their lineup is full of strikeout marks, the Dodgers sign a trio of contact hitters to play the outfield. The strategy falters on opening day when manager Dave Roberts calls for a hit and run and no one can remember exactly what that means.

TIGER’S TRIUMPH: Tiger Woods returns to the Masters with so many green jackets that he hires former caddie Steve Williams to carry them into the clubhouse. Williams later misunderstands a comment by Woods about beating Patrick Reed, who is hospitalized after being found unconscious on the Hogan bridge.

FREE AGENT FUN: Gerrit Cole is unceremoniously booed after failing to make it out of the second inning in his debut at Yankee Stadium, where one young fan holds a sign saying “Yankee fan this morning. Not a Yankee fan anymore.” Anthony Rendon, meanwhile, struggles to adapt to the Anaheim lifestyle, complaining that he can't take his kids to the grocery store any more because he keeps running into Mickey Mouse and Donald Duck.